Does it matter if I vote for an unopposed candidate in a primary?

Is there any effect when NOT voting for a candidate to an uncontested seat in a primary where a write-in is NOT allowed?

Specifically, I'm voting as a Democrat in the Illinois 2016 primary - sample ballot for my ward screencapped below. 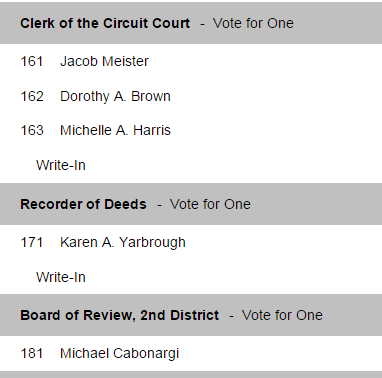 Obviously there is an effect if choose to not vote for a candidate for Clerk of the Circuit Court ( effectively 1/3 of a vote for all of 161, 162, 163 ). As well, it would seem that if I choose to not select 171 for the Recorder of Deeds, then my effective vote for that seat is proportionally reduced by the number of distinct write-in candidates.

However, if I leave my selection for Board of Review, 2nd District empty, is there any effective difference to candidate 181?

In very small municipalities and special districts, an unopposed candidate typically needs at least one vote to be elected, so your vote could make that difference if almost no one else ends up voting.

Some states also dissolve small political entities as a matter of law, or commence a process to determine if they should continue to exist, if not enough votes have been cast in multiple recent elections for its offices.

Finally, it isn't uncommon in a general election, for the number of votes cast for an unopposed candidate to factor into a formula for the number of signatures required on recall petition, or for a citizen's initiative proposal.

For example, in Colorado, "The signature threshold to place a recall question on the ballot for a state or county elected official is 25% of the total votes cast at the last preceding general election for that office."

Similarly, the state secretary of state position is not infrequently uncontested, but:

Sometimes local governments also have initiative thresholds that depend upon the number of votes cast for an office that may be unopposed.

In Primary Elections, Casting A Ballot Matters More Than Casting A Vote For A Particular Unopposed Candidate

In a primary election, in a jurisdiction that isn't entirely moribund, none of these factors are likely to matter.

Casting a ballot at all, causes a public record that you voted to be produced which often prevents your voter registration from being classified as inactive, and also signals to candidate and political party campaigns in future races that you are an active voter in a particular location who is sufficiently politically engaged to vote, even in a primary which may be uncontested, making you a target for volunteer and campaign contribution calls, but also a lower priority for get out the vote messages.

what is the reason for listing that seat at all since it is unopposed? Is it just a courtesy to the candidate? Is there a legal requirement? Just logistics of the balloting process?

The unopposed candidate is on the ballot at all, mostly for informational purposes as a well paced campaign ad for that candidate in anticipation of the general election. This is mandated by state election law.

Some jurisdictions cancel primary elections entirely if there are no opposed candidates for any office. Fewer jurisdictions still only list contested races, but this is the exception, and not the rule.

But, to finally answer the actual question asked, the considerations that go into not voting for a particular unopposed candidate on a ballot that is going to be cast otherwise are mostly symbolic:

Unopposed candidates are legally required to appear on the ballot. Other reasons for including them may include: to inform the voter about who is running, and to avoid confusion over certain elected positions "missing" from the ballot.

Not the answer you're looking for? Browse other questions tagged united-states voting primaries .

4
Strategy to *not* vote for a candidate using Single Transferable Vote
4
In a U.S. presidential primary, what does an "uncommitted" vote really mean?
10
What happens if convention delegates refuse to vote for the candidate they're committed to?
2
If you sneak into a closed primary and vote as an independent, are you guilty of a crime?
2
Precedents for replacing a candidate selected through a primary
4
Is it ever better to vote against a candidate in a primary, rather than for one?
2
What happens if no candidate reaches the viability threshold in a primary?
5
Does Mexico hold primary elections?