Why don't black people embrace anarcho-capitalism when it would encourage groups like the Black Panthers? [closed]

This film described how the corrupt government police murdered Fred Hampton in his home. 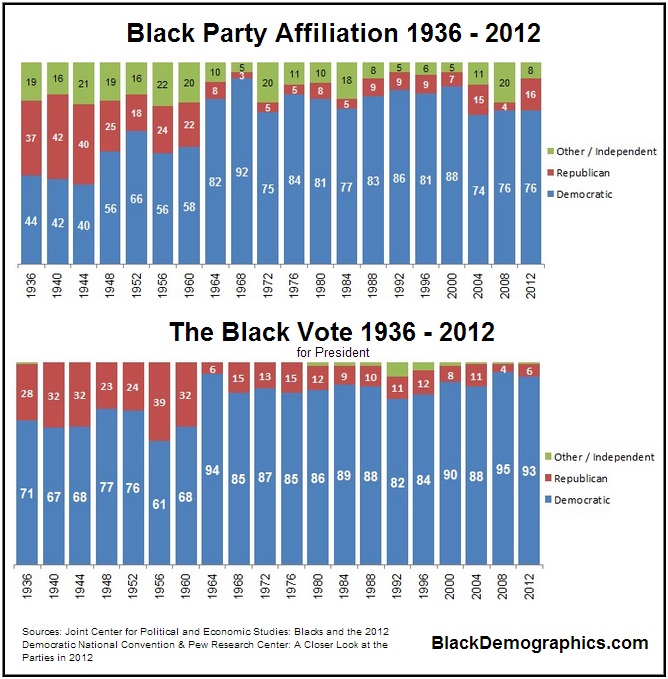 So why don't more black people embrace anarcho-capitalism as an alternative, where Black Panthers would be one choice among many for security? I realize some do:

But the majority still does not.

I think the premise of your question is broken

Currently young African Americans seem to be gravitating towards a message that is being popularized by Kendrick Lamar. This message does surround racism in its many forms from rating of individuals based upon their complexion to the inordinate amount of male black youth that are shot by police compared to other ethnic groups.

To answer your question

So why don't more black people embrace anarcho-capitalism as an alternative, where Black Panthers would be one choice among many for security?

Anarcho-Capitalism does nothing to further an idea of equality nor does it rid the State of Institutionalized Racism. Certainly there is an argument that institutionalized racism doesn't even exist. I do not subscribe to such a belief system when crack cocaine sentencing is 10x the length of powder cocaine.

Ultimately what would be the benefit to no government? The Federal Government has stepped in repeatedly to assist with thing like voters rights as well as investigating major police departments across the United States. This includes the tiny city of Ferguson as well. Perhaps African American youth are embracing the ideas of mentally abolishing racism and are not interested in an uprising and having to protect themselves against the State alone. The past has shown that standing up against the State doesn't work and that violent response is untenable.

Anarcho-Capitalism is not ideologically representative of the Black Panters.

We Want An End To The Robbery By The Capitalists Of Our Black Community.

That's point number three of the Ten-Points Program, a manifesto written by Black Panther founders Huey Newton and Bobby Seale. I don't know how much more direct you can make it.

The Black Panthers were Marxists, students of a school of conflict sociology. AnCaps and other neoliberals will characterize an essential conflict in government vs. private interest, but that is not, precisely, fundamental to the Marxist conceit. Rather, the essential conflict is class based, with capitalism being the most recent development in exploitation. For Marxists like the Black Panthers, racism is not just some kind of hateful whimsy that only becomes violently destructive when the government jackboots get in on it. Rather, it is itself a product of capitalist self-interest.

You've heard of how "workers must seize the means of production," right? In chattel slavery, such as was practiced in the American South, the workers are indistinguishable from the means of production; they're owned as property in exactly the same commodified manner as a plantation field or a cotton 'gin. Racist exclusion was no less useful for maintaining an exploitable underclass after the civil war, either. For example, the prisoner leasing programs provided slaves-in-all-but-name as a direct byproduct of racist belligerence among law enforcement. The draft during the Vietnam War press-ganged thousands of young men to fight the enemies of capitalism, but passed over people who were in university, which, generally speaking, did not include a lot of black people. Finally, because obviously there are also plenty of working-class white people, racism is a method of division which foils any effective anti-capitalist sentiment by stirring up proletariat infighting.

Pursuant to the last point, I'll also note that, as time went on, the Panters curved away from Black Nationalism and into Revolutionary Internationalism. Yes, the Black Panthers were anti-establishment, but not because they were merely laissez-faire. They were anti-establishment because, in their opinion, the establishment in question was a longstanding edifice of capitalist values. The answer, for them, is not to simply open up a power vacuum where that government stood, if it just means that the consolidated power of the bourgeois withstands the move to "anarchy" and starts cutting deals to trade food to people in return for their eternal bondage. That's just a regression. Rather, to the Black Panthers (and other Marxist groups), the answer is solidarity among the exploited class and opposition to the ideologies which created a class disparity, of which racial disparity is only one kind. That doesn't mean you don't have a government. For many, it means you run one.

So, to answer your question:

Why don't black people embrace anarcho-capitalism when it would encourage groups like the Black Panthers?

Because the only way an anarcho-capitalist encourages an actual Black Panther is by provoking him.

There's also a very simple response to this question.

Anarcho-capitalism is defined by a removal of regulations. Your argument is that it would remove the law enforcement activities that obstruct private security or militia groups like the Black Panthers.

It would also remove the federal law enforcement activities that obstruct the KKK.

Given a choice between trying to improve accountability and standards in the current system, and switching to a system where un-checked Black Panthers slug it out with un-checked white supremacist militant groups, I know which I'd choose. For one thing, I wouldn't be surprised if the white supremacists started out with more access to funds.

For some practical examples of what tends to happen when centralised law enforcement fails and communities turn to local militia groups for self-defence, look at, to give some examples:

Of course, these aren't what Anarcho-Capitalism is supposed to look like, in much the same way that the USSR, Maoist China and Khmer Rouge weren't what Communism was supposed to look like; but they are examples of what can often happen when you have a private militant group formed to defend a community or private interest, with no check or balance on its power, beyond its own ability to compete (much like USSR etc are examples of what can happen when a group with a nominally egalitarian ideology gain total power).

The median net worth of white households is 10 times that of black households.
https://www.washingtonpost.com/news/wonk/wp/2017/09/28/black-and-hispanic-families-are-making-more-money-but-they-still-lag-far-behind-whites/

Unless economic regulations are implemented to eliminate existing inequalities by race, it would not stand to reason that African Americans would want to support a system in which they have an existing and nearly insurmountable disadvantage.

The ability to rise above the class in which you were born is called social mobility.

Socioeconomic mobility in the United States refers to the upward or downward movement of Americans from one social class or economic level to another,[1] through job changes, inheritance, marriage, connections, tax changes, innovation, illegal activities, hard work, lobbying, luck, health changes or other factors.

The same wikipedia article demonstrates that social mobility is better in Social Democracies than it is in the slightly more Capitalist United States. Access to affordable healthcare and higher education can improve social mobility.

This is also why socialized healthcare and free college afford greater social mobility to poor people; whereas if those things had to be funded entirely privately, then opportunities for personal advancement would be more closed-off to poor people.

The American K-12 education system provides an unequal quality of education for rich and poor people. This is a reason why those who are already poor do not attain good intragenerational social mobility. This could be helped with better federal funding for education, which would fall on the more social side of the economic spectrum.

“At virtually every level, education in America tends to perpetuate rather than compensate for existing inequalities. The reasons are threefold. First, the K through 12 education system is simply not very strong and thus is not an effective way to break the link between parental background and a child’s eventual success. … Second, because K–12 education is financed largely at the state and local level, resources devoted to education are closely linked with where people live and with the property wealth of their neighbors. For this and other reasons, poor children tend to go to poor schools and more advantaged children to good schools. … Finally, access both to a quality preschool experience and to higher education continues to depend quite directly on family resources.”

Pretty much every kind of social program in the U.S. offers some kind of enhancement for social mobility and mitigation of existing inequalities, as do a progressive tax code and an inheritance tax.

Basically, African Americans would not benefit from a move towards greater Capitalism, unless the slate is first wiped clean of all existing wealth and possessions, or wealth is somehow put on an even keel. That is because they are already at a large disadvantage in terms of possessing financial capital. Every mechanism that erases this disadvantage is Socialist in nature. That is precisely why they should favor a more Socialist economy, if they are pursuing their own self interests. That also helps explain why the Black Panther movement was a Socialist movement.

Not the answer you're looking for? Browse other questions tagged united-states anarchism police anarcho-capitalism .

17
How do Republicans explain their lack of support among minority voters?

2
Why was the statement "When You're White You Don't Know What It's Like To Be Poor" so controversial?
76
Why don't poor people vote in the United States?
21
Why do US tech companies honor rulings by the EU when they don't have jurisdiction?
10
If conservatives don't like government, why don't they like the shutdown?
30
How can Republicans who favour free markets, consistently express anger when they don't like the outcome of that choice?
3
Why does black support for Trump increase when the density or concentration of blacks in the neighborhood decreases?