What non-religious arguments, if any, are used against LGBT rights in general and marriage equality in particular?

It appears to me that opposition to marriage equality comes primarily from religious groups, in particular from the Abrahamic religions. Quoting Wikipedia:

Many forms of religions, including the Eastern faiths and Abrahamic faiths, do not support homosexual sex. Evangelical Christianity,[10] Catholicism,[11] Mormonism,[12] Orthodox Judaism,[13] and Islam,[14] hold the view that homosexual sex is a sin and that its practice and acceptance in society weakens moral standards and undermines the family.

The Wikipedia article doesn't expand much on non-religious opposition to same-sex marriage. It appears most countries with strong anti-LGBT laws are countries with a dominant Muslim or Christian population (red shades on this map from Wikipedia), although attitudes within religion-dominated countries differ significantly (primarily catholic Spain has legalised gay marriage and 82% believes LGBT should be accepted, but in majority Hindu India this figure is only 10%). On the legal side: 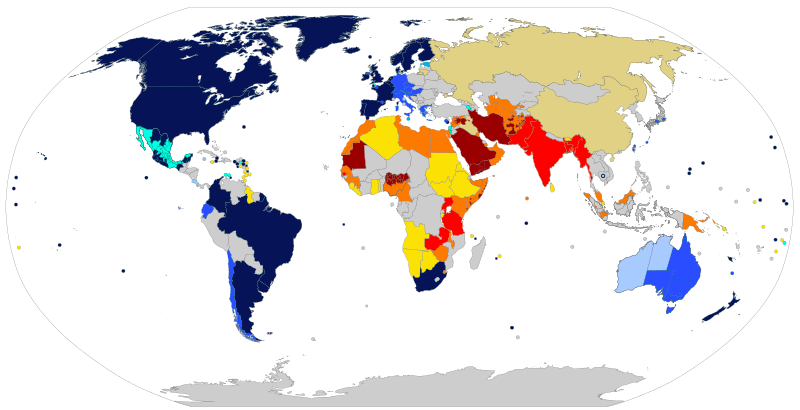 Apart from arguments originating from the (Abrahamanic) old testament, what sources exist for opposition to marriage equality?

Please note that I'm listing the arguments as they exist - whether any of them are valid or not is irrelevant to the question. If you care about its correctness, ask on Skeptics.SE :)

There are four main arguments against homosexuality.

One secular argument against government recognition of gay marriage is that the reason governments recognize marriage and provide benefits to married couples is to encourage the creation of stable environments for procreation in which paternity can be assumed and thus the raising of children will be done by two parents (one of each sex which studies show is better for children than two parents of the same sex) both of whom have a strong interest in good parenting due to biology. Since gay marriage does not encourage the creation of such environments, why should the government recognize it and provide benefits to gay couples?

Another secular "argument" (not sure if I should call it that) I've heard often is that homosexuality is gross, disgusting, icky, etc. Many people seem to confuse what they dislike with what should be illegal.

Not the answer you're looking for? Browse other questions tagged same-sex-marriage lgbt+ .

54
What is the logic behind forbidding LGBT conversion therapies?
16
Why was homosexuality unacceptable in USSR?
10
Why does China officially oppose LGBT rights?
7
Why are gay rights opposed in Japan?

24
Are there any notable Gay Rights groups advocating “Get the Government out of marriage” solution to same-sex marriage?
5
What are the arguments for and against gender-neutral passports?