Where did all this deficit come from?

But those 2 years passed, and the federal deficit remains above a trillion. One might expect it to drop back down to pre-bailout levels in 2010, but that hasn't happened.

Why hasn't the deficit already gone back down. What's making it linger at close to the same level it was during the bailout?

Government spending, 2009 and on, surged (consistently and permanently above 3.5T every year, compared to 2-3T before 2008)). Revenue dropped (except for 2012) to slightly above 2T. Deficit = "revenue-spending", so yearly deficit obviously increased to above 1T. 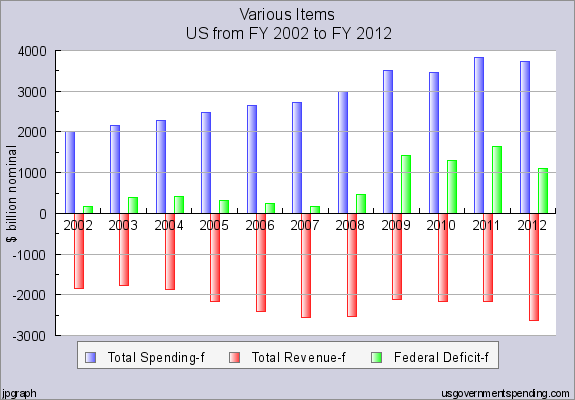 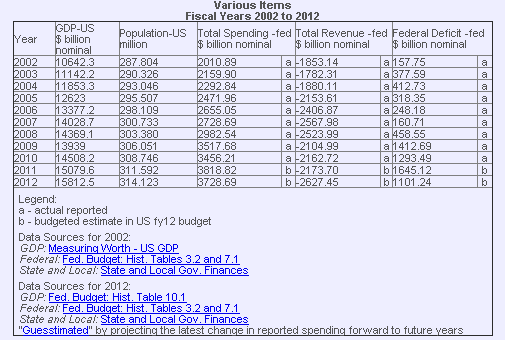 Please note that these figures did NOT include spending on wars in Iraq and Afghanistan, which would have pushed the spending as well as deficit up by ~$120-150B a year (The Pentagon's total allocation for war from 2001-2011 in current dollars was $1,208.1 based on CBO), so actual deficits would have been north of $300B yearly before 2008, not $200B, to compare apples to apples.

Now, if you are curious what drove the spending increases that helped along this high deficit, let's look at the #s behind the graphs below in 9 spending categories - although, the graphs should give a very good idea even without the tables.

But here's the data, hopefully self explaining.

Most of the increase (NOT diminished at all) vs. 2008 was Welfare spending, followed by Seniors , then Defense, followed by Other (which was mostly high in 2009, likely due to TARP). 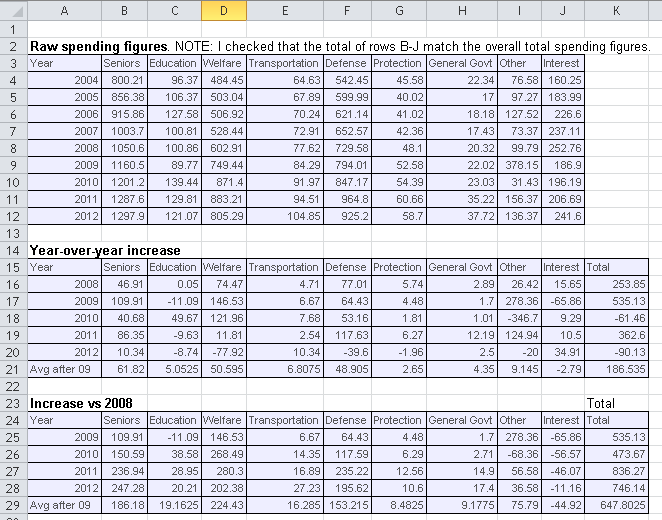 The comment above regarding expenditures on defense and welfare causing the deficit to me seem somewhat myopic. The rate of employment by the federal government in new departments and expanded employment overall are major contributors. The benefits package offered by the federal government are far more enriched than even most private employers. Basic payroll for federal employees along with taxes and cost of benefits have never been published in any of these reports that I've seen. I would be very interested to see the cost of the budget including these items: basic payroll, taxes (federal, state, local), benefits of the administrative side of government.

3
What is this "Other" category of US federal spending and why is it so high compared to 2008?
3
What is the current impact of TARP (bank bailout) on US deficit?

2
Why would a state reject federal funding for infrastructure?
5
Where does the $77 a week figure come from
15
Where do Secret Service names come from?
3
What does this comparison between Steven Mnuchin and Forrest Gump mean?
31
Where did all the Confederate Statues come from?
0
Graham-Cassidy: Where does this name come from?
0
Has the White House expressed willingness to revisit the January 19, 2018 DACA deal?
5
Where do the democratic and republican matched animal logos come from?
2
Where did this figure showing shifts in support between 2016 and 2020 come from?
1
Does all military authority come from the President?