What is the difference between EFTA and the EU?

In Iceland, which is an EFTA country, there is currently a debate raging about possibly joining the EU (and then adopting the Euro currency). Now one of the arguments put forward by those who are against an agreement is that the country would lose parts of its sovereignty.

Does anyone know the difference between being a member of EFTA and EU when it comes to legal, judicial, financial and other sovereign matters? Are EU countries less sovereign?

A free trade area such as EFTA is a much looser form of economic and political union than the EU. EFTA has negotiated access to the EU single market and has partially accepted EU laws relating to single market access. It's also largely signed up to the Schengen area free movement of people. It doesn't have EU style common policies, such as agriculture, fishing, transport and regions however and it has no plans for the sort of economic and political integration implied by eurozone membership.

@andy-gray already provided some info on the EFTA but it's important to note that the EFTA is mostly an historical curiosity at this point. As far as I can tell, its main function nowadays is as a vehicle for the trade agreements concluded between EFTA countries and the rest of the world.

Importantly, Iceland is not only an EFTA country but also a member of the EEA. The EEA entails a much deeper integration with the EU than a traditional free-trade agreement. Formally, its members do not automatically take up all EU law or accept the EUCJ jurisdiction but in practice, they more-or-less have to implement most of it anyway. This create a paradox: they don't really have a choice if they want to continue their relationship with the EU but they don't have a seat on the table. In my view, it's a net loss of sovereignty.

Important differences include the fact that EEA members don't have to adopt the euro (an excellent thing for Iceland, which handled the last few years much much better than the EU despite a dramatic banking crisis of its own making). Also, they don't participate in a few other programmes (apparently fishing is a biggie for Iceland).

I was enlightened by 1. the diagram beneath from Legal and General Investment Management. 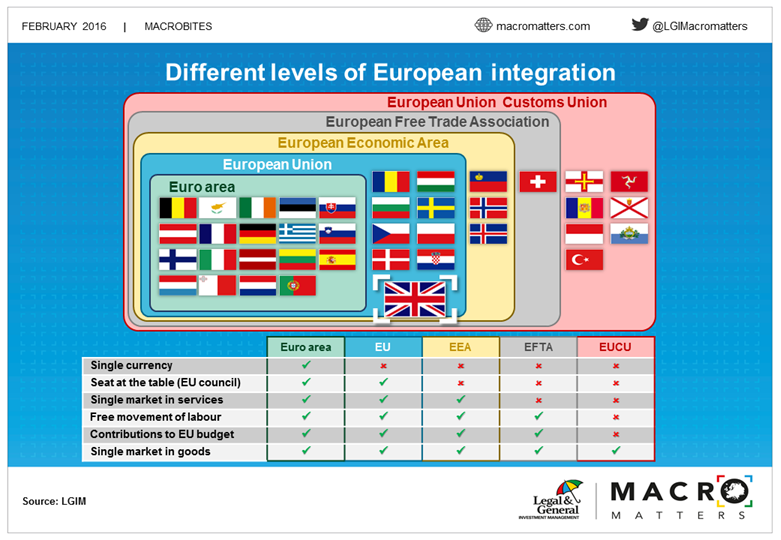 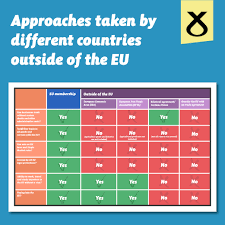