Why is the Reformed Political Party Youth the largest political youth organisation in The Netherlands?

In The Netherlands, the Reformed Political Party Youth (Dutch: Staatkundig Gereformeerde Partij-jongeren) is the largest political youth organisation, with 12000 members. They are allied to the Reformed Political Party (Dutch: Staatkundig Gereformeerde Partij (SGP)), a theocratic organisation with roots in the bevindelijk gereformeerden, an orthodox protestant church. Elements in the platform of the SGP include that the government should be based on the word of God, the Belgic Confession, that "false religion" should be actively averted by the government, and that women cannot be part of government (Note: this is a selection of some of the more unusual elements from their platform, which includes many more traditionally conservative points seen in platforms of other conservative parties and less orthodox christian-based parties in The Netherlands and other countries).

Why is it that a theocratic party that is relatively small in politics has such a gradual increase in membership in a society that is getting less religious? And why is their youth wing the single largest political youth organisation in the country?

Lack of membership in other parties

About two thirds of the Dutch voters are a "floating voter" (Dutch: zwevende kiezer), meaning they don't have any particular party loyalty and could vote for one of several parties. In addition, only about 2.2% of eligible voters are a member of a political party.

So as you can see, party loyalty among the general population is low, and has been in decline for decades.

But for the SGP party loyalty is much higher. For SGP voters, it's not just a political party, it's a religious affiliation. The majority of SGP voters are from the bible belt or otherwise geographically clustered. See this chart of SGP voters: 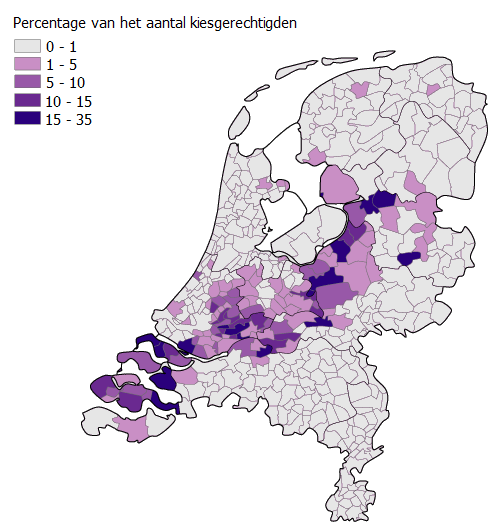 So this is reason one why the SGP has an unexpected high number of members: sharply dropping memberships in other parties, which is not happening – or happening less – in the SGP due to higher party loyalty.

The second reason is that the demographic are a bit more involved than just "religion is in decline".

Don't look only at the relative numbers of religious participation. It's true that support for the reformed denominations have decreased from 37% in 1960 to 18% in 2015 (cbs), but the population has grown as well. In absolute numbers we're going from 4.2M to 3.1M. Still a loss of well over a million, but much less than 3.2M if we had forgotten to scale the population down to 1960 levels.

Secondly, some of the more conservative regions have a larger – sometimes spectacular – population growth. Look at this map of family size, then look back at that map of the SGP voters. See similarities? Not an exact one-on-one match, but it follows the "bible belt" pretty closely.

The population of the Netherlands in general has grown by about 40% since 1960, but for some conservative regions this number is much higher. In Urk the population has grown by 400% since 1960. If we consider that about 50% of voters in Urk vote for SGP, then this translates to about 4,000 extra SGP voters, quite a few of them will become members.

This also explains why the electoral result has been stable at two or three seats for almost a 100 years. For the upcoming March elections the SGP is currently polling at four seats!

All of the above applies to the SGP Youths as well, but for the Youths I would expect the relatively high number of members to be even more pronounced as young adults raised in a religious family and community where >20% of the population vote for the SGP tend to have pretty clear views on their political and religious affiliation at a relatively young age, whereas other people tend to choose their political affiliations at a later age (if they ever choose one).

Alienation from the rest of the country

This last reason is a bit more subjective, but in my observation it seems to be the case that religion in decline tends to increase religious participation.

The religious population will feel alienated from the rest of society when it moves in directions they oppose. This is particularly the case in the Netherlands, as it has one of the most liberal policies in the world: legalized euthanasia, gay marriage, soft-drugs (sort-of anyway), abortion, prostitution, etc.

You can see this in some of the values the SGP is trying to defend. A few years ago the SGP fought tooth and nail to maintain the anti-blasphemy laws. They hadn't been used since 1962 and no judge would ever convict anyone for it, but they felt it was important. They're also fighting an ever-losing battle to maintain strict laws concerning the day of the Sabbath (i.e. force everyone to work as little as possible on Sundays). Their website is literally "closed" on Sundays.
These things may seem like somewhat insignificant token policies, but from the perspective of SGP voters they've already lost so much, and they're saving what they can.

Alienated people tend to, well, seek out other people who are alienated like them. People who would previously just vote SGP might now become a member. (The biggest increase in SGP membership? In 1999/2000, when all those liberal gay marriage, euthanasia, etc. laws were being passed.)

19
Why do the Dutch Euro coins have a religious inscription on their edge?