What is this “Other” category of US federal spending and why is it so high compared to 2008?

In researching this question: " Where did all this deficit come from? " - I stumbled on the fact that "Other" spending catgory was the 4th largest spending increase in 2009-2012 period compared to 2008. 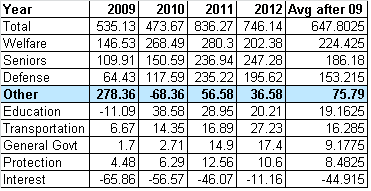 NOTE: the figures are NOT total spending, but how much that year's spending increased compared with 2008

What exactly is this spending category? Why is that spending so high and what contributed most to it?

OK, I have extracted the spending data from http://www.usgovernmentspending.com into a spreadsheet, and here's what I came up with:

1) "Other" category of spending contains the following sub-categories (I have only included those that have non-zero federal spending):

As you can seem the largest components are Agriculture, Community Development, Basic Research, ad Housing Development (which jumped from #4 in a decade to #1 since 2009, due to assorted housing market subsidies etc...).

An additional spike was Economic affairs in 2009, most likely due to TARP spending, but that did NOT affect the averages too much (only 50% growth) since most of TARP was repaid in 2010/2011.

According to the Center on Budget and Policy Priority, the Other category includes everything not accounted for in the other categories. This includes:

Benefits for federal retirees and veterans: This subcategory combines the veterans' benefits and services function (700) and the federal employee retirement and disability subfunction (602, which is part of the income security function).

Scientific and medical research: This subcategory consists of the general science, space, and technology function (250), and the health research and training subfunction (552).

Non-security international: This subcategory consists of the international affairs function (150) except for international security assistance, which is included with defense, above.

All other: This subcategory consists of all other federal expenditures.

Unfortunately, the White House OBM isn't as easy to search as I would like, so it is difficult to find out hwy that category increased so much. I suspect that since the largest chunk of it in 2011 (7% of total budget) was Benefits for federal retirees and veterans, that is most likely the cause.

13
Where did all this deficit come from?

4
What is the purpose of food stamps, WIC, SNAP, and other related federal programs?
9
Could raising the tax on the wealthy, without cutting spending, balance the federal budget in the US?
6
Why does the media workforce lean liberal or democrat
3
Why did 1 US state introduce the line-item veto between 1984 and 2008?
5
What is the defense spending obligation for NATO countries this year?
62
Why is the US so religious compared to other Western democracies?
21
Do any nations have in place formal mechanisms to “save in good years/spend in bad years”?
0
Why do US independent voters seem at least as likely to vote Republican compared to all voters since 2008?