Why did Ted Cruz drop out of the race?

According to Google, here is the latest Republican delegate count (as of May 6, 2016): 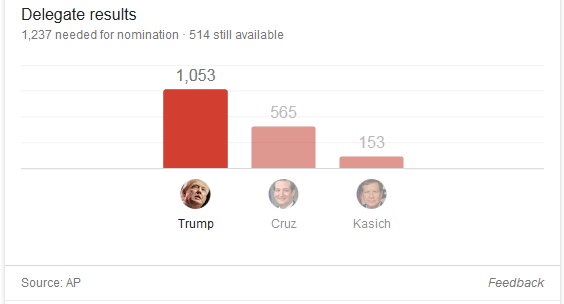 Obviously, Cruz does not have a mathematical chance to obtain the 1,237 delegates needed for the nomination. However, with Cruz still in the race, it is still possible that Trump won't obtain the 1,237 number, either, in which case the nominee will be chosen at the convention. (In fact, it is still mathematically possible for Cruz to end with more delegates than Trump.)

Cruz had been a long shot for a while, and had been eliminated from the race to 1,237 for a few weeks. Why did he now choose to drop out of the race?

Indiana was a deciding point because it, and the immediately preceding elections, showed Cruz could not win against Trump in a one-on-one contest.

After Rubio dropped out, Cruz had a series of unexpected back-to-back landslide wins in Utah, Wisconsin, Colorado, and Wyoming. It seemed Cruz might be able to gather the necessary delegates to prevent Trump from getting the nomination on the first vote. The hope was this would free enough delegates from their obligations to Trump, and dropped out candidates, for Cruz to win in the next round. This worked for him in his 2012 US Senate election.

But then he suffered a near shutout receiving no delegates in New York, Connecticut, Delaware, Maryland, and Pennsylvania with just 2 from Rhode Island. These states are all in the northeast, the loss could be explained as being Trump's home turf, so Cruz declared Indiana his battleground. He lost again, and again it was a shut out.

What about John Kasich still splitting the vote? Even if Kasich had dropped out, Cruz would still have lost. Trump got a majority of the popular vote in every state after Wisconsin.

There was still a slim hope, why not fight on anyway? Because $MONEY$.

But it also says he has $30 million still on hand, why stop now? Two reasons: debt and future campaigns.

The $112 million is money spent, but it doesn't include paying off debts and outstanding bills. I speculate Ted's accountants ran the numbers and told Ted if he didn't stop now his campaign would be left in debt and, as a failed candidate, unable to raise funds to pay it.

This leads to the other part, saving money for future campaigns. Ted Cruz is a US Senator from Texas. In 2012 Ted Cruz lost the first Republican Primary, but won in a runoff. He'll be up for reelection in 2018, and if 2012 is any indication he may be facing stiff competition. Money left over from his presidential campaign can be used in his 2018 US Senate campaign.

It's in his best interest to stop now, before his campaign goes into debt, while he still has a significant war chest for 2018.

Look at the delegate math: prior to Indiana, Trump needed 248 delegates to ensure victory. If he sweeps Indiana (57 delegates) and California (172 delegates), he's virtually assured of winning the nomination, being just 19 delegates short. Since both states use modified winner-take-all rules, even a minor edge in votes translates into a major advantage in delegates.

At the time Cruz dropped out, Trump had gotten all 57 delegates from Indiana, and polls were showing a near-certainty that he'd get all 172 California delegates. In order to get a contested convention, Cruz would need to win virtually every single other primary, including landslide victories in proportional-representation states like Washington and Oregon, and a victory in the Trump stronghold of New Jersey.

In order to see how unlikely a Trump loss is, you can play around with FiveThirtyEight's delegate calculator. (Example Trump victory scenario: California, 25% of the delegates from each proportional-representation state, and any single winner-take-all state.)

Indiana was established as the lynchpin for his campaign amongst the larger donors. With the results of its primary, the probability that Donald Trump could be denied the required 1237 delegates shrunk significantly.

That left a very slim, every thing must go right, path to hold done Donald Trump and get into the second vote.

Not the answer you're looking for? Browse other questions tagged united-states election president republican-party primaries .

2
RNC convention first ballot rules for candidates who fail to pass rule 40b?
3
Why does the Republican establishment favor Rubio over Cruz?
2
What happens with the current delegate count?
30
Is Donald Trump officially the Republican nominee [as of May 7th]?
6
Can Ted Cruz and John Kasich still win delegates in upcoming state primaries?
11
What happens if a top-ticket nominee becomes completely incapacitated near an election?
3
What is the difference between voting for presidential nominee vs. voting for delegates in Maryland?
9
How might Trump still win the electoral college?