Why did local authorities in England and Wales stop building homes?

Or, with raw figures from the Ministry of Housing, Communities & Local Government spreadsheet, extracting figures for England and Scotland for completed council homes in selected years: 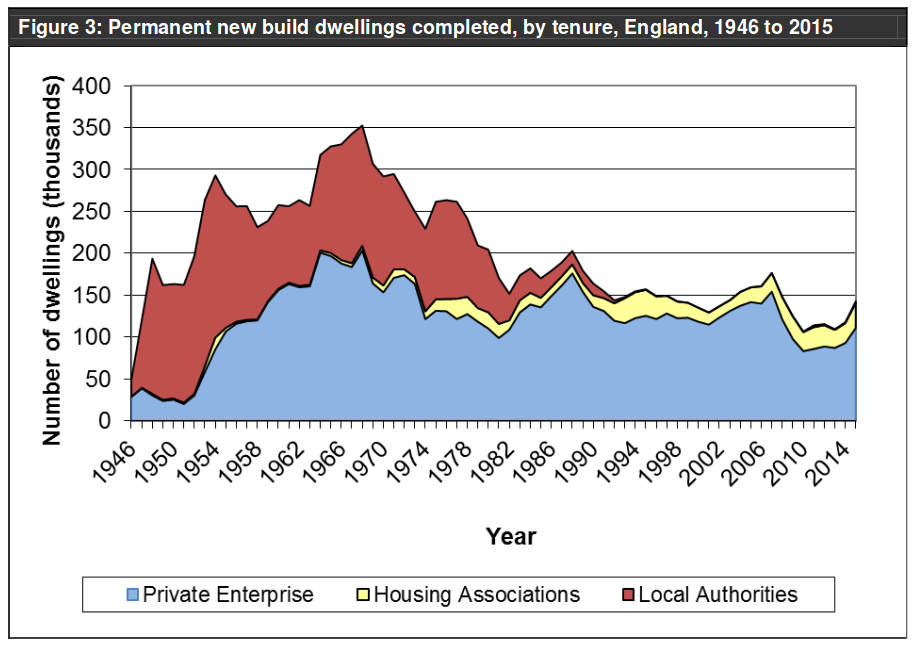 This has resulted in the housing crisis (for example, see Financial Times, Shelter, The Independent, The Telegraph).

Why did UK local authorities stop building homes since the 1980s?

Although houses were built by local councils, funding came from the central government so the political decision to no longer do so was taken in Westminster. So the direct answer would be because they cannot afford to, but what motivated the political decisions stripping councils of money to build homes?

Much of the social housing stock has been sold off under Right to Buy and it will not be built at replacement rate without the removal of significant barriers to new builds. [1]

Successive governments since 1979 have created a set of circumstances that make it economically infeasible to build social housing stock. Governments have tried to compel the building of replacement stock without significantly reversing those economic circumstances.

Now housing associations and other social housing landlords (e.g. the NHS and the military) will likely face similar problems with building new properties since the Right to Buy was extended to them.

Scotland abolished the Right to Buy in 2014 and it will end in Wales in January 2019, so we'll have a 'natural experiment' to see whether social housing stock will recover in those countries.

As to why, the Thatcher government (and successive Conservative governments) purported to want to restructure the relationship between the individual and the state. They said the state owned too much, people had a right to own their homes, the pride of ownership would reduce urban deterioration and ownership would increase labour mobility. But there were Conservatives who believed that making more people owner-occupiers would destroy British 'socialism'. One even proposed giving away social housing to the secure tenants.

Right to Buy is the most expensive privatisation in UK history, it is the largest transfer of wealth from the public to the private sector - more than 2m properties sold at an average net loss.

[1] " it is certain that reform of the RTB scheme would significantly help the council sector address the current shortfall of homes, both overall and in most individual local authority areas. Taking everything into account only one in five (21%) of the authorities who participated in our research said that they currently expect to be able to replace at least the majority of the homes they have sold. By contrast almost three quarters (73%) said that they only expect to replace half or fewer, including one in 10 (12%) who said that they will not be able to replace any at all. http://www.cih.org/resources/PDF/Policy%20free%20download%20pdfs/Keeping%20pace%20-%20replacing%20right%20to%20buy%20sales.pdf

It didn't stop, it was just a phase, a low point.

"In 2012, the government reformed the HRA subsidy system so councils keep all the rents they collect from their homes, and receipts from sales of houses or land, giving them the freedom to invest them in building new homes." https://www.gov.uk/government/news/councils-help-get-britain-building

An example (page no 4, the third column from right): https://www.gov.uk/government/uploads/system/uploads/attachment_data/file/572013/House_Building_Release_September_Qtr_2016.pdf

Not the answer you're looking for? Browse other questions tagged united-kingdom economy housing .

5
Is there any research relating to reform and corruption in local and small scale authorities?
3
Why do the BBC and the Guardian report different figures for the UK local elections?
29
Is there a feasible route by which UK housing can be made more affordable without devastating the housebuilding sector and its employees?
3
Why did the US and UK choose different solutions to the problem of an undemocratic upper house?
2
Why did Italy decide to join the Belt and Road Initiative when other European countries were initially against it?
28
Why is using the euro instead of a local currency such a big deal and why is the wealth of the society an argument?
0
Why did UK and EU agree NI Protocol with clause allowing unilateral action in the event of diversion of trade (DOT) when they knew DOT was inevitable?