Recent EU top meeting, who is in the background?

There is a recent meeting of different EU top bosses, images here: 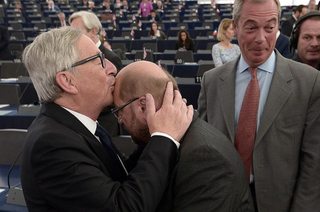 To the left, we can see Juncker. In the middle, Schulz. But who is the third person? He is not a translator (a translator is on the far right, in the background, with the headset).

Btw, where is the headset on them? As I know, Schulz has a German first language, while Juncker uses probably French. As I know, politicians don't like to talk on foreign languages with eachother (except if they have a really good contact or they can talk on a nearly native level), because it would be a disadvantage for them.

As Daria has already said, the third person is Nigel Farage.

They may have no headset. Schulz is a German native speaker, but also speaks French quite well (http://www.euractiv.com/section/languages-culture/news/next-eu-commission-president-will-be-a-polyglot/). This Youtube video shows that Martin Schulz is capable of discussing political issues in French. Unfortunately, we don't know whether Farage speaks, or at least understands, French at the same level.

In any case, they might be speaking French, English or German. In fact, the first link I quoted states that both Schulz and Juncker are fluent in English:

His main opposition, Jean-Claude Juncker, candidate for the European Peoples Party (EPP), speaks fluent English, French, German and Luxembourgish (his mother tongue). He also speaks Latin, which will probably not give him a competitive advantage.

I place German as a third choice, since I'm not sure Farage speaks German.

The person on the background with a headset may not be a translator, but simply a TV journalist during a live broadcast who just happened to be there.

6
Who nominates EU commissioners?
6
Why doesn't the EU have a single top-most level representative?
2
Who decides how EU structural funds are distributed?
6
Who can fire the EU presidents?
1
What are some examples of recent concrete policies within the EU Common Agricultural Policy?
1
The backstop involves staying in a Customs Union with the EU - who gets the tariffs?
2
Who commands Operation Sophia?
4
Who votes to extend Brexit's deadline?
4
Who can remove European Commissioners?