What happens now the UK has left the EU? [closed]

Given that leave is confirmed to have won the EU referendum, what happens now?

Will David Cameron resign? If so does that mean we will have a new PM negotiating the UK's exit deal?

And how long is the process of exiting the EU likely to take?

Nobody knows. Much of what is going to / might / will happen is purely speculative, as none of it has happened before (Greenland left, but that was as an autonomous region of Denmark, not the third largest economy in the EU).

However, David Cameron has announced he will step down as Prime Minister in October. http://www.bbc.co.uk/news/uk-politics-36615028

In the European rights, UK has 2 years to leave the EU, but he would be able to leave earlier if an agreement is found.

Concerning the intention of leaving from the UK, it may be giving during the discussions around the UK referendum in the European Council the 28th and 29th of June.

But apparently Mr Cameron doesn't want to be the leader of the Brexit.

Update: 26th June The BBC released this chart outlining the process for the UK leaving. 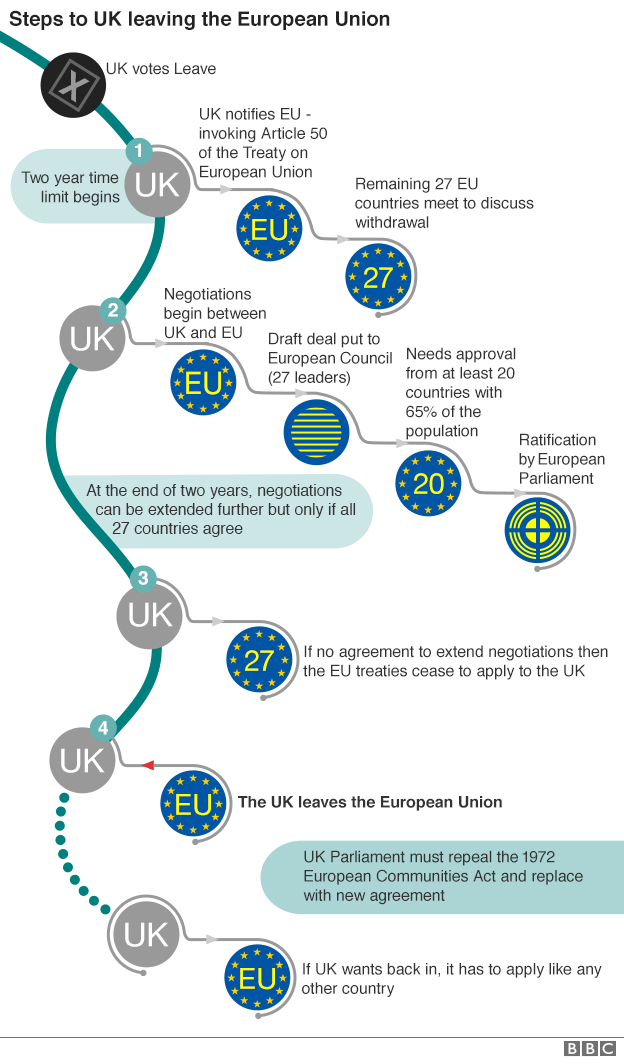 6
What are the likely options now available to the UK in terms of its relationship with the EU?
8
What were the effects of the UK entering the EEC (“Brenter”)?
2
What does it mean to “leave the backstop”?
60
What options are left, if Britain cannot decide?
4
Has the BBC provided arguments for saying Brexit being cancelled is unlikely?
2
What is the practical implication of the Dec 2018 Fisheries bill amendment?
13
Has Theresa May explained why she refuses to resign?
18
Why did David Cameron offer a referendum on the European Union?
10
What happens to the Queens Speech now?