Can a country within a federated nation be admitted in the EU?

Right before the French Revolution, the western parts of the Austrian Empire and of the Kingdom of Prussia were part of the Holy Roman Empire, while their respective eastern parts (today Poland/Lithuania/Hungary/Slovakia etc...) weren't in the HRE. 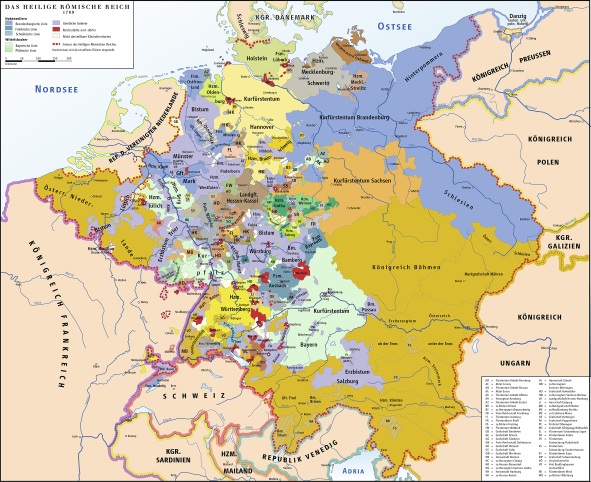 So I am now asking : It is legally possible for part of a sovereign state to be also member of the European Union ? The reason why I'm asking this is because the majority of Scotland and Northern Ireland voted against Brexit, while the UK as a whole voted in favour of it. However Scotland also voted against leaving the UK. This means that Scotland would be a good candidate to be simultaneously part of the UK and the EU, while the UK wouldn't be part of the EU.

Article 49 of the treaties of the European Union says

So the question is "what is a state"? There are many different definitions of statedom, but in practice a region is a state when other states consider it one.

So in order to join the EU, the other EU states would have to recognize the entity as a sovereign state. Whether they do or do not is a matter of political will. And then there is of course the possibility to amend the treaties of the European union to accommodate for individual regions of states to join the union.

However, assuming it is possible, there is a plethora of practical problems to solve. For example, the country might be unable to ratify certain EU directives because it lacks the autonomy to do so. When Schengen applies, you would have a Schengen outer border right through a sovereign country. When the Euro agreement applies, you would have parts of countries which use different currencies.

It is legally possible for part of a sovereign state to be also member of the European Union?

Yes-ish. However, this isn't the same question as

Can a country within a federated nation be admitted in the EU?

I think that the only case of a state which could be considered partially a member of the EU is Denmark, which has some autonomous regions (Greenland, Faroe Islands) which are outside the territorial jurisdiction of the EU treaties; although there are some other complicated cases (Canary Islands, most dependent overseas territories of the UK) which could be argued to fall into the same category.

However, in these cases it is the nation which joined the EU (or signed up to a predecessor treaty) with exclusions, or in the case of Greenland with subsequent modification to create an exclusion. That isn't a directly relevant precedent for Scotland or Northern Ireland remaining in the EU when the rest of the UK leaves.

Were the UK to try to remain in the EU but with territorial exclusions covering England and Wales(!), treaty amendments would be required which would have to gain at least qualified majority support from the rest of the EU, which would be unlikely to agree; and even if that hurdle were crossed there would likely be significant difficulties making it work at an institutional level. For example, would it make sense for an English minister to attend the Council of Ministers?

Not the answer you're looking for? Browse other questions tagged european-union federalism .

11
What level of autonomy do regions within the Russian Federation have?
3
Can anybody explain why the organization of a two-party system benefits from federalism?
11
Under EU law, can Scotland remain or be re-admitted to the EU after Brexit while still a part of the UK?
15
How does the European Union objectively assess the level of corruption within a certain country?
6
How can European Union influence political decisions in a member country?
6
Do nascent exit-movements currently exist within the EU?
9
Does the EU require preferential trade within itself?
5
How is the number of representatives within EU structures computed?
3
Are regulatory compliance checks performed within the EU bloc?