Are there any other countries besides the UK that have movements to leave the EU?

Are there any other countries that have movements to leave the EU? If so how popular is the movement in that country?

Yes, a source attributes the traffic light colors as follows: 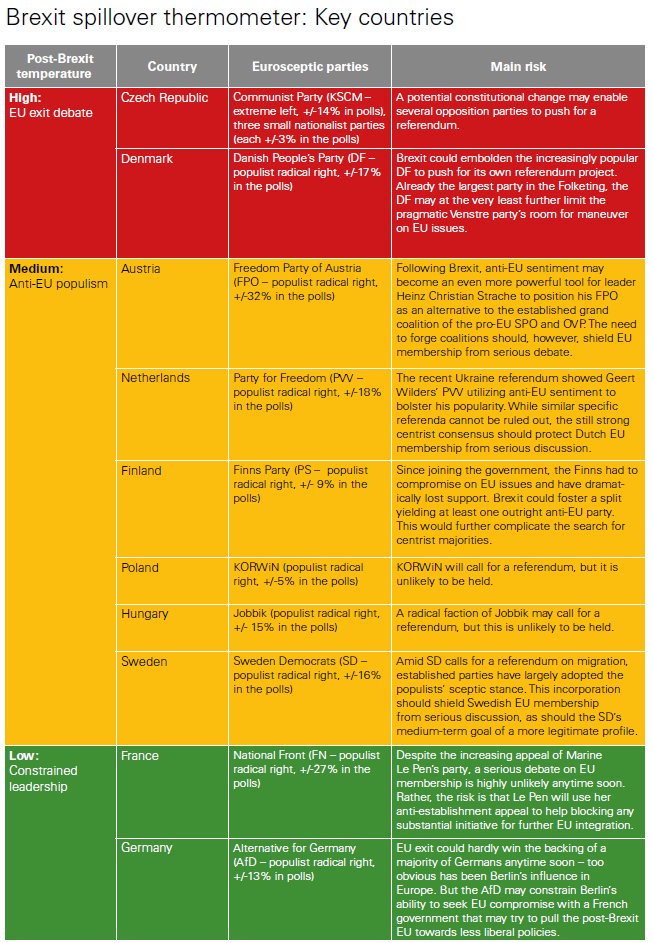 There are several other countries that could be called "code orange". For example, a Slovak nationalist leader Kotleba began to work on the Slovak exit today. Slovakia's exit would be more complicated because the country belongs to the Eurozone.

Czechia (my homeland) and Denmark are probably the most urgent examples. The referendum is estimated to produce 70% for the departure – almost a sure thing (the opposition towards the EU became a true overwhelmingly dominant opinion due to the welcoming EU attitudes towards the illegal migrants: over 90% of Czechs are against the admission even of the legitimate refugees and even if it is temporary) – and the discussion about the referendum has already been scheduled in the Parliament once a few months ago (but the lawmakers ran out of time).

The strong unreformed Czech communist party (some 15%) plus about 3 right-wing parties around 3% are supporting a full Czech-out. I know many of these people in person and they seem very self-confident now. Moreover, the politicians who used to be uncritical towards the EU have been de facto eliminated from the political spectrum. Everyone is rather critical these days although the largest parties and the (maverick) president nominally support the EU membership.

Denmark is "code red" mainly because of a strong right-wing party DF. The Netherlands is a bit analogous. The number of EU countries where the referendum could end up with "majority for leaving" is comparable to 1/2 of the EU. In most countries, however, the existing political establishment wouldn't allow a referendum. Czechia is an exception in this sense.

Not the answer you're looking for? Browse other questions tagged european-union europe brexit .

2
Are there any separatist movements in Turkey's East Thrace?
27
Why do other countries in the EU care so strongly that the UK accepts free movement of people?
11
What other European countries are experiencing independence movements?
8
Are there any examples of politicians within EU countries that have been elected after being convicted?
18
How has the Brexit process affected eurosceptic movements in other European countries?
5
What other EU countries (besides Romania) have raised major concerns about the "European Green Deal"?
18
Would France and other EU countries have been able to block freight traffic from the UK if the UK was still in the EU?
8
Are there any countries that the UK now has trade agreements with, that it didn't before it left the EU?