How is the EU governed?

The US government is established and limited in power by the US Constitution. However there is no EU Constitution that I can find, and there are quite a few political analysts (pundits), appearing on various talk shows in the wake of the Brexit vote. They variously make claims that the EU is being run by a small council of bureaucrats that are not elected and not accountable to anyone other than the political elite in Europe that arraigned their appointments. And that the elected parliament has no real power, and their votes are non binding and meaningless.

I find this more likely to be opportunistic rabble rousing but my personal research has not led me to any concrete answers that would provide me with anything concrete to believe.

So how is the EU governed? What documents spell out its rights and responsibilities?

The European Union has treaties

There is indeed no "constitution" but that does not mean that the EU operates without constraints or that its institutional structure is informal or secret, quite the opposite. Instead, the main source of EU law and the basis for the functioning of its institutions are found in several treaties and especially in:

Interestingly, there was an attempt at turning all this into a “constitution” of sorts through the “Treaty establishing a constitution for Europe” (a mouthful and a source of endless theoretical debates about what this would have been: a constitution? a treaty? both? something else?) This was voted down by French and Dutch voters in two referenda and shelved… until most of its contents reappeared in the Lisbon treaty and became EU law, only without the “constitution” moniker.

If you follow discussions about the EU, you might have heard about many other treaties like the Maastricht treaty, the Nice treaty or the Lisbon treaty. Those were treaties amending the main treaties. Among these, the original Treaty of Rome (1959) and the Maastricht treaty (1992) were the most important ones but unless you have an interest in the history of the EU you don't need to read them directly. EU institutions and member states work based on the consolidated versions integrating all these changes.

Beyond that, there are a few other treaties that have not always been fully consolidated:

In the EU context, the treaties I just described are called "primary law". They define the structure and workings of the core institutions and these institutions are bound by them. The rest of EU law (the actual rules fleshing out the principles laid down in the treaties and regulating many things in the EU) are termed "secondary law" and defined in various instruments called directives, regulations, etc.

The treaties also contain a legislative procedure of sorts, specifying how secondary law is enacted and are in this respect very similar to a constitution.

The main institutions are:

There are several procedures to revise the treaties but without getting into too much detail, it should be noted that this process is firmly in the hands of the member states. The process is driven by the European Council (the meeting for all heads of state or government) and often requires an intergovernmental conference.

Any revision also requires the consent of each and every member state and, in most cases, ratification following national rules (typically this means at least a vote in parliament but it might also require a revision of the constitution and/or a referendum). That's one of the reasons why revisions have become increasingly uncommon (the last major overhauling of the treaties is the Lisbon treaty, which is itself based on the Treaty establishing a constitution for Europe and was therefore negotiated and prepared before the big 2004 enlargement).

Other aspects of governance

EU law can be invoked in front of national courts in each EU country, under certain conditions (regulations definitely can, directives generally cannot but there are exceptions).

The documents which are the main constitutional basis for the EU are the treaties of the European Union.

There are four major organs of the EU:

Of those organs, the one which manages the day-to-day affairs of the EU is the EU commission. It is the closest thing the EU has to a government.

The EU commission makes proposals for new EU legislations (EU regulations, directives and decisions). But any of these need to be accepted by the parliament, so their votes are definitely binding and meaningful. In many cases the council of ministers also needs to accept legislative proposals.

The difference between a regulation and a directive is that an EU directive itself has no actual effect yet, because they still needs to be implemented by the member-states in form of national laws which need to pass the national legislative processes. There were cases where it turned out that EU directives could not be implemented in certain states either because the implementing laws couldn't pass legislative process or because the implementing laws violated the national constitution. A good example is the EU data retention directive (which was then also repealed by the EU court of justice).

Here is an infographic, courtesy of Wikipedia: 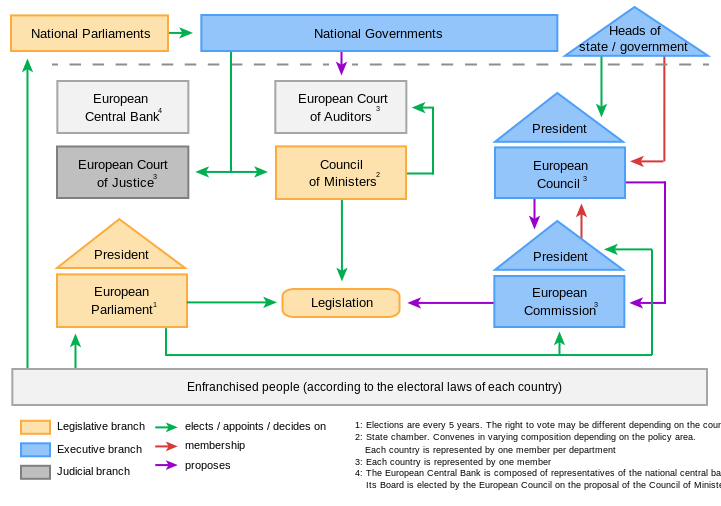 These diagrams can help. 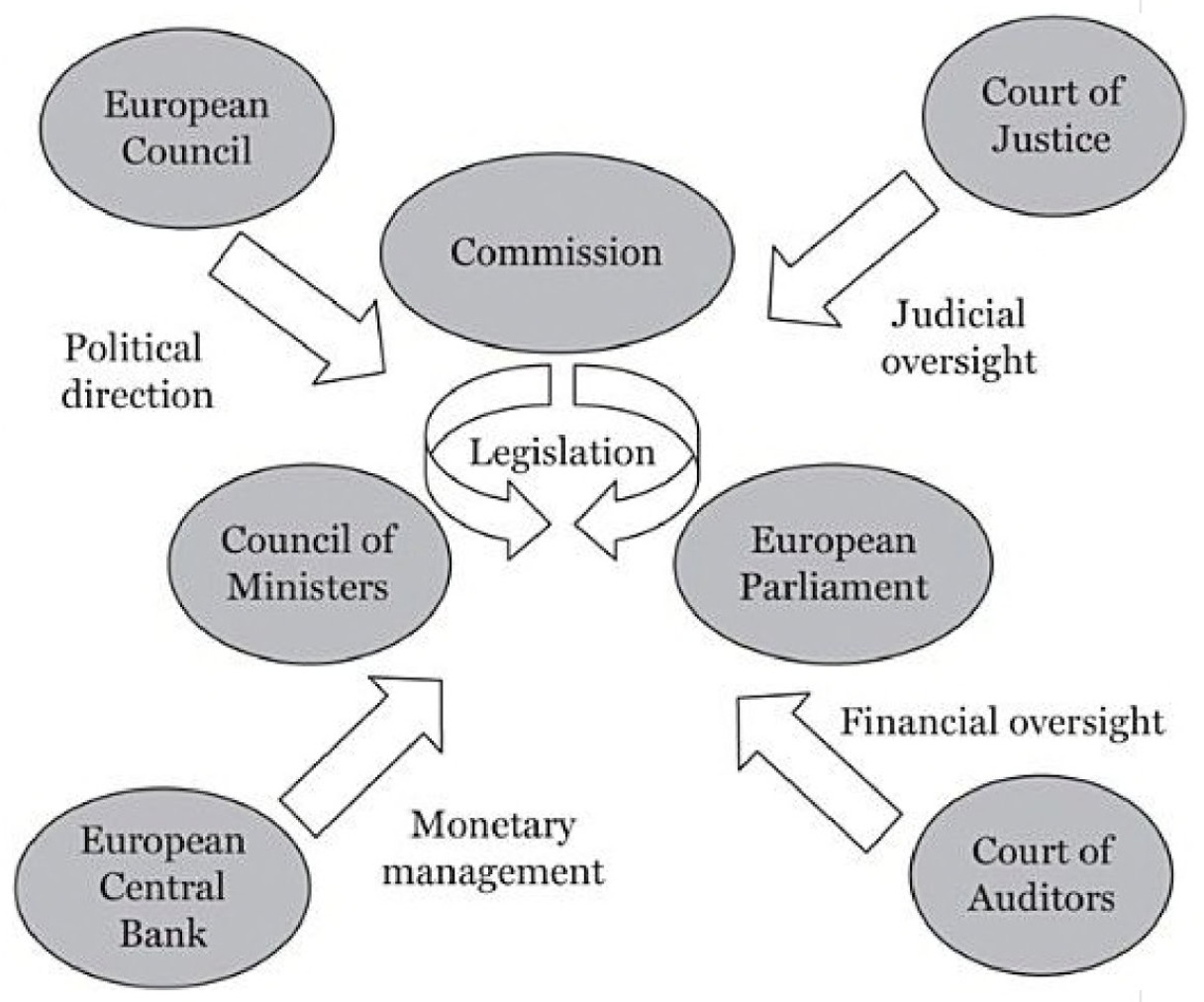 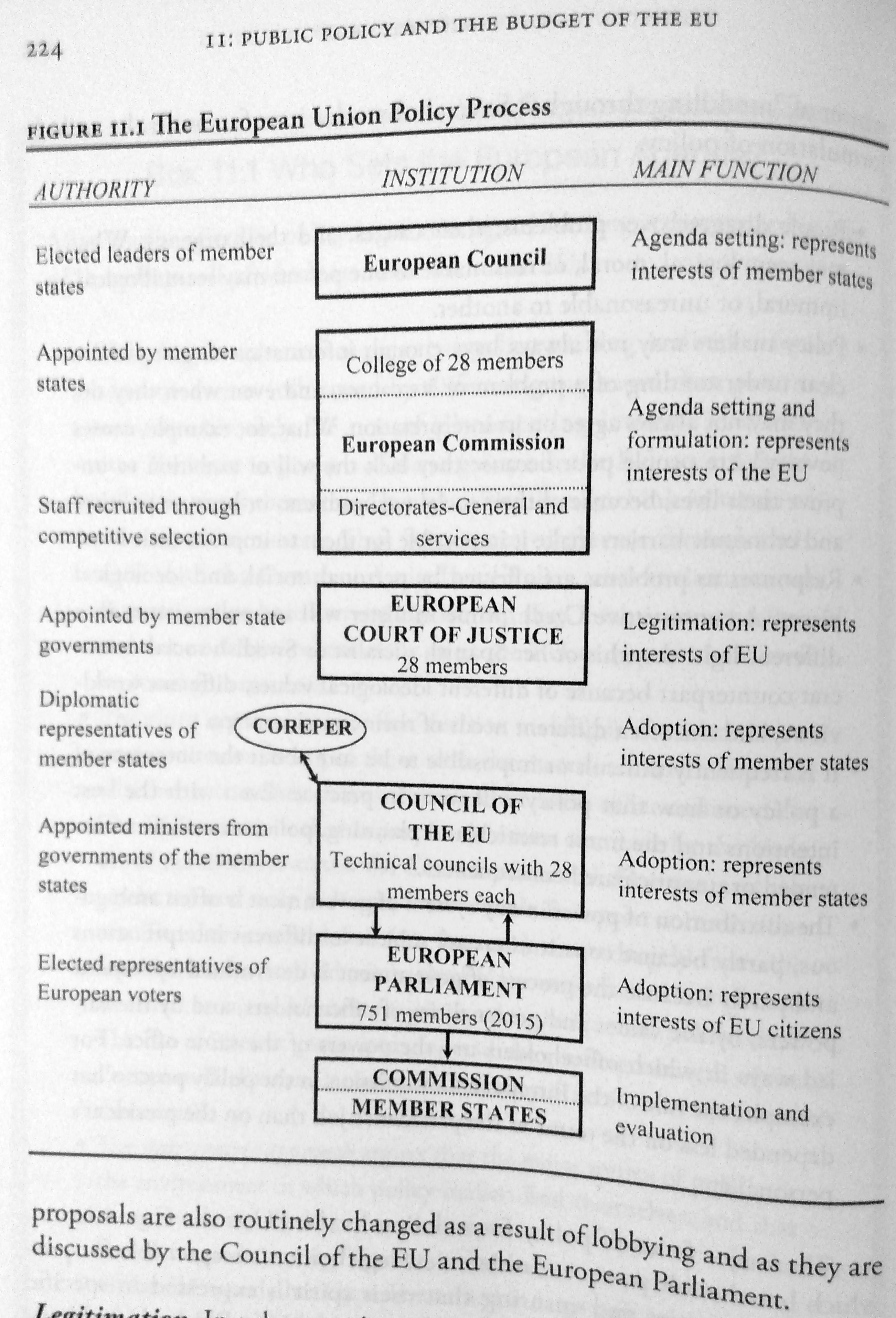 4
How many votes were cast in the 2014 EU elections?
4
How many people work for the EU?
4
How was European Medicines Agency's new location actually decided?
5
How does the EU allocate food quotas to individual countries/producers?
2
Who decides how EU structural funds are distributed?
4
How is the budget planned for agencies of the European Union?
5
How is the number of representatives within EU structures computed?
5
How does the standardisation process in the EU work?
2
How are decisions taken in the European Council?