What is the cause of the discrepancy between Scottish and English-Welsh results in the Brexit referendum?

In the United Kingdom European Union membership referendum, 2016, the results per constituent country were as follows:

England and Wales both voted to leave by similar majorities. Northern Ireland and Gibraltar have very particular circumstances. The particular London result can be explained by demographics, wealth, education, etc. But that still leaves a huge difference between England (almost 7% lead for Leave) and Scotland (24% lead for Remain). What is the cause of those differences?

Some possible explanations that I can think of:

What is the cause of the discrepancy between Scottish and English-Welsh results in the Brexit referendum?

I'm sure many of the factors you mention are relevant, but I think the main reason is much simpler:

Here is a map (source) of the 2015 general election results showing how stark the contrast is: 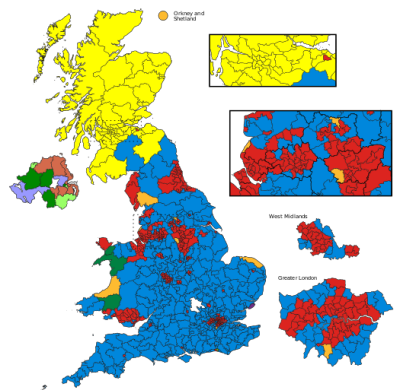 And here is one from the 2010 general election (source) showing a similar contrast: 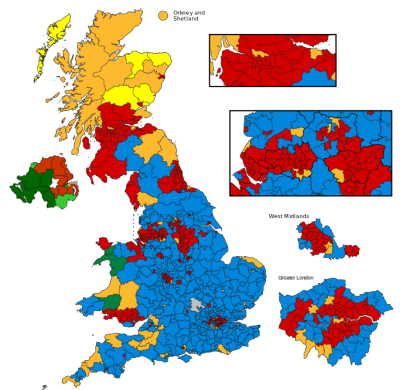 And finally, the EU referendum results (source). In Scotland the correlation is obvious, but even looking at the rest of the UK, you can see a fair amount of overlap between the few parts of England and Wales that voted remain, and those that voted non-Conservative. 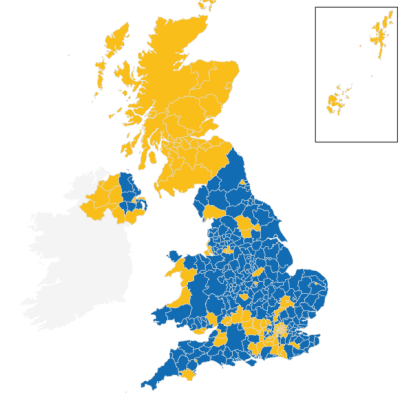 Here's some more evidence that there was a correlation between what party you voted for in 2015, and how you voted in the EU referendum (source) (in order: Conservatives, Labour, Liberal Democrats, UKIP, Green, SNP): 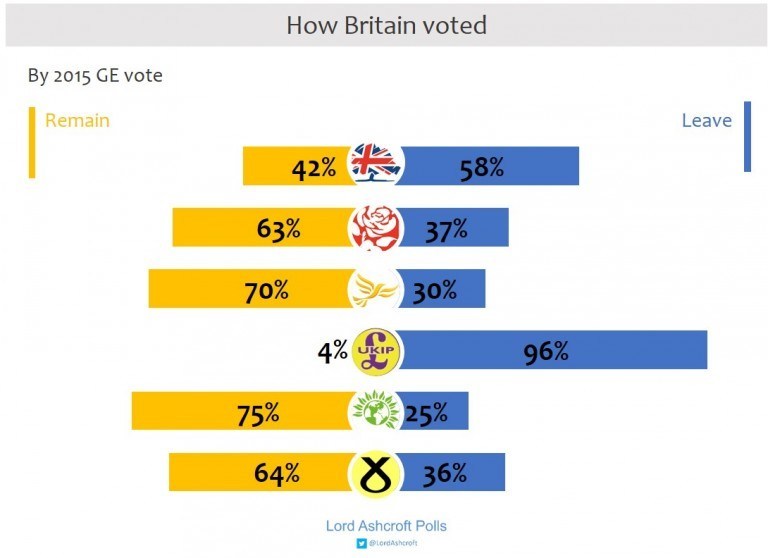 A majority of those who backed the Conservative in 2015 voted to leave the EU (58%), as did more than 19 out of 20 UKIP supporters. Nearly two thirds of Labour and SNP voters (63% and 64%), seven in ten Liberal Democrats and three quarters of Greens, voted to remain.

The correlation between political party and EU preference is apparent in the parties themselves too. The Conservatives were divided on the EU and provided the loudest voices in the Leave campaign, along with UKIP. Labour, the Liberal Democrats, and the SNP were almost unanimously in favour of Remain.

That leaves the question of why Scottish voters are far less likely to vote Conservative, but I won't address that as it would make the topic too broad.

What about the reversal of the 1975 referendum mentioned in gerrit's answer? – hkBst 4 hours ago

The situation back then was different. The 1975 referendum was to remain in the EC which had a narrower scope than what is now the EU. Free trade was a more prominent component, whereas now political integration and socialist ideals have become bigger issues. At the time, Labour was more Eurosceptic than the Conservatives:

In the 1970s and early 1980s the Labour Party was the more Eurosceptic of the two parties, with more anti-European Communities MPs than the Conservatives. In 1975, Labour held a special conference on British membership and the party voted 2 to 1 for Britain to leave the European Communities.

Not the answer you're looking for? Browse other questions tagged united-kingdom brexit scotland .

3
How did Labour party members in England vote in the 2016 Brexit referendum?
66
Why can't Northern Ireland just have a stay/leave referendum?
14
Would it be plausible to solve the Irish Border issue by unifying Ireland?
4
Why does SNP support in Scotland seem disproportionate with actual support for independence?
2
How central are referendums to the UK constitution?
27
Explain for kids — Why isn't Northern Ireland demanding a stay/leave referendum like Scotland?
22
What is the rationale for the United Kingdom statistics body not allowing black people to identify as having an English ethnicity in its surveys?