How accurate is this political orientation chart? [closed]

How accurate is this chart from The Definitive Political Orientation Test?

I assume that liberalism is the original meaning of the word as in liberal democracy. 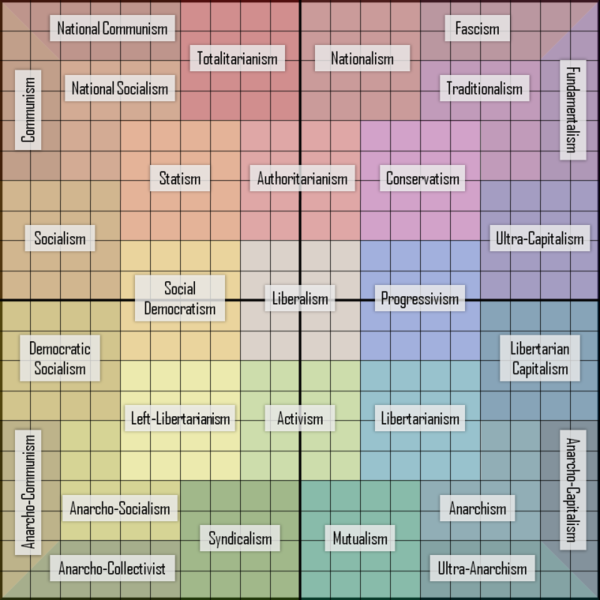 As a preface, the idea of the chart is accurate, in a sense that there is a consensus among political scientists or pretty much anyone else with interest in politics that a multi-axis political spectrum model (like Nolan chart, or the chart you show which is an example of a political compass) is a far better, more accurate, more useful, and overall less stupid way of representing political views and ideologies, compared to a typical single-axis model like "left-right".

However, the details of the chart are definitely not entirely up to snuff, as shown below.

I guess the whole things is too broad to criticize, so I will post point criticisms:

user4012's answer is spot on, though I would add that even if we assumed the categories were correct, the problem is that the system is along a two dimensional axis of (presumably) economic and political rights. But that ignores political ideologies which value other things, like environment or religion. In either case they can both be assigned somewhere along a political compass, but really environmentalism and religiosity (plus no doubt other values) need their own axis to be expressed meaningfully. Something like a radar chart might suffice.

If you want a professional and academic chart to compare with, something like the Inglehart–Welzel cultural map of the world is a solid piece of work. 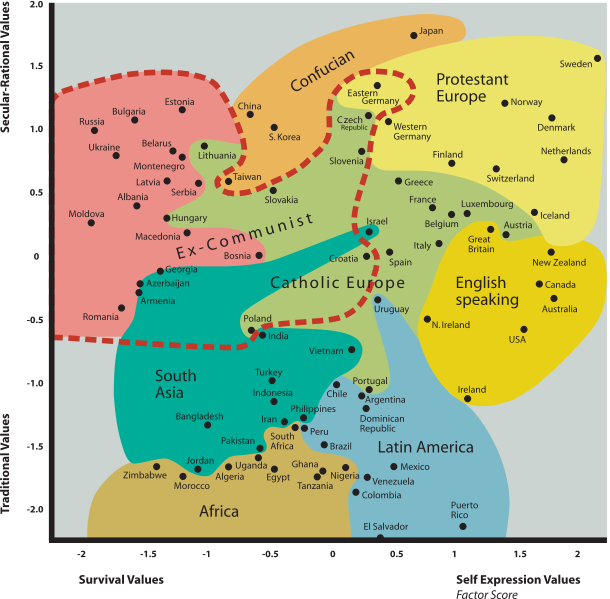 In comparison the "definitive political orientation test" looks juvenile, especially since as has been mentioned some terms don't exist, make sense, or are outright wrong.

How is "progressivism" right wing? The entire point of left-right is that it originates in the sitting arrangement of the French assembly, those on the left being for egalitarian revolution and those on the right being against both. And liberalism is centrist? Social democracy is pretty much centrism since it attempts to find compromise between workers, companies, and the state. Liberalism as a term in America means left wing, but generally and technically it is otherwise considered a right wing thing because it prioritises individual liberty above the group. And why is pure anarchism close to anarcho-capitalism when again, historically and technically anarchism is closely related to communism. Anarchism emerged as a schism between Marxists and anarchists, when Mikhail Bakunin and his lot were expelled from the first international.

I assume the person who made this chart didn't know much about politics and was right wing.

This wouldn't fit the United States. In the US, the label progressivism would be to the left of or in the same place as our liberalism, not more capitalist. I find the concept of a "left-libertarianism" that has similar personal financial freedoms to social democrats to be rather weird.

I think that this doesn't have enough axes. For example, I would call left-libertarianism something like civil libertarianism. And it can coexist with regular libertarianism. Or it can be entirely separate. It should be its own axis, not a label on this two-dimensional plane.

Take gun control as an example issue. In the US, that is a left wing thing. So on this chart, you would expect it go towards the bottom left. But how do you match less government with increased interference in gun rights? For that reason alone, I'd be skeptical of the vertical axis. And what does gun control have to do with personal financial freedoms vs. community financial freedoms (the horizontal axis)? So there's another axis missing.

Where would they put US Republicans on the graph? I guess that Democrats would go to the right of the middle. Are Republicans more pro-government than Democrats?

Perhaps this better fits Europe, although I'm skeptical of that as well. Note that Europe's right wing would be on the middle top of that graph, the center towards the center, and the left wing on the left.

TLDR: not particularly accurate. At least not in the US.

Not the answer you're looking for? Browse other questions tagged political-theory ideology political-spectrum .

1
What is the theoretical content of the terms used in non-aggression discourse within liberal politics?
24
How accurate is the horseshoe theory?
4
Is "liberal conservatism" a coherent political position?
6
What are John Rawls core arguments in favor of liberalism?
6
Can compulsory voting increase the quality of a non-dictatorial republic democracy?
9
What is a Republic?
0
Do political assassinations and attempts correlate with portions of the political spectrum?
5
The meaning of "right" in Italian Fascism
2
Is an "enlightened public" political system a form of democracy, or of technocracy/epistocracy?