Are there any official borders between continents?

I was talking to a friend about how Turkey wants to join the EU, I was a bit confused because I considered Turkey to be part of Asia, however he thought it was part of Europe. So we got maps up on our phones and they seem to have conflicting results. So when I went back to my apartment I took out my laptop and started searching for these 'unknown' countries. I found a surprisingly large amount:

There are quite a few more I found. Yet there seems to be no official map agreed on by everybody, so my question is: Are there official borders between continents?

No, there are no official borders between continents.

There are several things to consider here in terms of what defines "continents":

The concept of "continents" was invented in ancient Greece; in their viewpoint, the Aegean was the center of the world and was surrounded by three continents: Europe, Asia and Africa. However, they didn't have modern knowledge about tectonic plates, thus their borders were decided arbitrarily.

Asia, Europe and Africa are physically connected. It's erroneous to call them different continents. They're technically just one huge continent. However, long before humanity came into existence, the African plate was estimated to be separate from Eurasia, and the Indian subcontinent was separated from Asia, and still is on a separate tectonic plate.

By definition, maritime islands are not part of any continent. The only difference between a continent and an island is that a continent is arbitrarily larger than an island, but there is no clear border. It is debated whether Greenland and Australia are big islands or small continents. (Greenland appears huge on many world maps using a Mercator projection because it lies very close to the North Pole, but, in fact, it's not that huge.)

Many islands that are close to only one continent are frequently associated with the continent they're close to. For example, Great Britain is considered to be a part of "Europe" and Japan's islands are considered to be a part of "Asia," but this is due to purely cultural matters and in no case geographical matters. Obviously, this continental categorization of islands by proximity cannot be applied to islands that are either close to multiple continents or far from any continent.

Traditionally, the border between Europe and Asia is physically represented by the Bosphorus and the Dardanelles in present-day Turkey. However, the tradition of having a continental border there dates from ancient Greece.

In Russia, the European-Asian border is today considered to be the Ural mountains, and, to the south of that, the Ural river. Historically, the Don River, (much further west than the Ural River) was also used as a border. This move eastward seems to have been motivated by an interest in making Russia more of a "European" country. This new line of demarcation was proposed much more recently, by Vasily Tatishchev. Before his proposal there was no clear border; as such, this border is much newer than the physical boundary south of the Black Sea, which has existed for several thousands of years. The modern definition makes Kazakhstan yet another country crossing the continent border, as the Ural river flows through Kazakhstan, too, and a large portion of that country is west.

The question about whether or not the newly independent Caucasian countries (Georgia, Armenia and Azerbaijan) are in Asia or Europe is subject to debate (perhaps even poisonous nationalist debate!) and based on opinion. The three countries are located south of the Caucasus, so they'd be "mostly Asian." However, Armenia and Georgia are traditionally Christian countries, so they tend to feel more European. On the other side, Azeris probably feel more Asian due to their shared heritage with Turkey and the Central Asian Turkic countries. All this is, however, debatable.

I'll add that Turkey was founded by Turks which invaded the region from Central Asia. Turkish is clearly an Asian language, and the people are of Asian culture. For example, they remove their shoes when entering a home, and talking loudly or disrespectfully is considered an absolutely awful practice, just like in Japan (whereas this behavior is common in all of Europe).

On the other hand, Russian is a Slavic language, which is clearly associated with Europe. The Asian part of Russia has been colonized by European Russians relatively recently. It is much less densely populated than the European part, where the vast majority of Russians live.

The border between Asia and Africa is today marked by the Red Sea and the Suez Canal. The canal was recently built, so before it was done, there was no clear border. Sometimes the Nile was used as a "continental border," and sometimes the eastern political border of Egypt, wherever it was during history, was used.

The border between Europe and Africa is physically delineated by the Strait of Gibraltar. Spain has two villages on the African side, so this also makes it a cross-continental country.

The OP didn't ask about it, but I'll still mention that the border between South America and North America has traditionally been the Panama Canal, in Panama. However, I'm fairly confident people from the USA and Canada consider all countries to the south of North America to be "South American" because of their Hispanic culture, even though they are living in North America. So once again, a cultural border does not match a geographical or historical border. 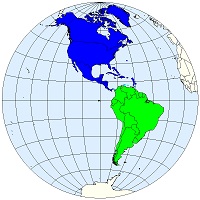 Continents as geographic entities have little political importance. They are defined by geographers, not politicians. And geography is no exact science. Most continent borders are just based on consensus, and there is no clear one.

For further information about how vaguely defined continents are I recommend the video "What are continents?" by CGP Grey.

Politicians usually consider continents more cultural than geographic unions. As far as most European politicians are concerned, countries are European not only by being situated in the western part of the Eurasian continental plate, but also when they are democratic, social-capitalist, secular and value human rights. As such, Turkey moved much further away from Europe in the last week.

Beside geographic (defined by seas, mountains, canal, or continental shelves underwater) and political boundaries, some borders between continents have also been proposed by biologists.

The limit between Asia and Oceania can be drawn along the Wallace line, since the flora and fauna (notably for birds) differ between each of its sides.

I was a bit confused because I considered Turkey to be part of Asia, however he thought it was part of Europe. So we got maps up on our phones and they seem to have conflicting results.

That’s indeed quite confusing, since Anatolian peninsula, where the most of modern Turkey is located, for an ages was and still is widely known under the name of Lesser Asia or Minor Asia (gr. Μικρα Ασια), in a sense of ‘Asia Proper’ or ‘Original Asia’.

Europe is not a continent, it is a geographic region. Yes, it has "official" or traditional border. Turkey has about 3% of its territory in Europe (East Thrace) while the rest is in Asia.

56
Would the USA be eligible to join the European Union?
14
Is Cyprus in Europe?

8
Are there precedents for the EU fining the UK for undervalued Chinese imports?
4
Will there be a border between Ireland and the UK if they can't agree on a deal?
12
Is there a radar system monitoring the UK sea borders?
4
Why are the formal borders of a city sometimes far smaller than the full metropolitan area?
4
Are there any other "Nine-dash lines" out there?
6
Are African country borders really straight?