In the aftermath of the failed coup in Turkey nearly 3000 judges were "sacked" among them two members of the constitutional court (source for example this Washington Post article) as well as many teachers, academics and military staff. See this related question here (asking a different question).

What does "sacked" exactly mean (the media seems to be quite vague about this topic)?

How come that is this possible in a parliamentary democracy? In Germany or the United States it is for good reasons very difficult to get rid of judges. This holds especially true for constitutional resp. Supreme Court judges (e.g. here §105 or here). In Germany, for example according to my laymen understanding of that law, only the constitutional court itself can sack individual members (and in the US both houses have to affirm a removal).

Do similar laws not apply for Turkey? Is the judicial independence limited in Turkey?

The judges can be suspended or fired by Boards of Judges and Prosecutors (English name may be different). The selection of the members of the board is defined by constitution (the process changed a lot recently). Currently majority of the members are assigned by the Executive branch. But still if the board disobey the president there is no guarantee for them to be arrested by police for an indefinite time. Also there is no guarantee that police obey the orders of jurisdiction if it contradicts executive branch (source). (Sorry can not give Wikipedia link because Wikipedia is blocked in Turkey now)

The members of the constitutional court can only dismissed by the court itself. But they can be arrested for an indefinite time by police and two of the members are arrested after the coup attempt. The court then decided that these two members are dismissed from the court. (source in Turkish)

So Board of Judges and Prosecutors and Constitutional Court has the power of dismissing judges. And now all or majority of members these are assigned by Executive Branch without any limitation or any check.

Another point is media is totally under the control of the government. If any journalist reports news that the government doesn't like he/she will be put in prison pretty quickly:

with Turkey accounting for nearly a third of the global total

Turkey, officially the Republic of Turkey, is a parliamentary republic in Eurasia according to the Wikipedia article. A system of "checks and balances" is very important in any republic and "Judicial Branch" plays a very important role.

On July 26th, 2016, President Erdogan announced a three-month state of emergency in response to the attempted coup invoking Article 120 of the Constitution of Turkey: 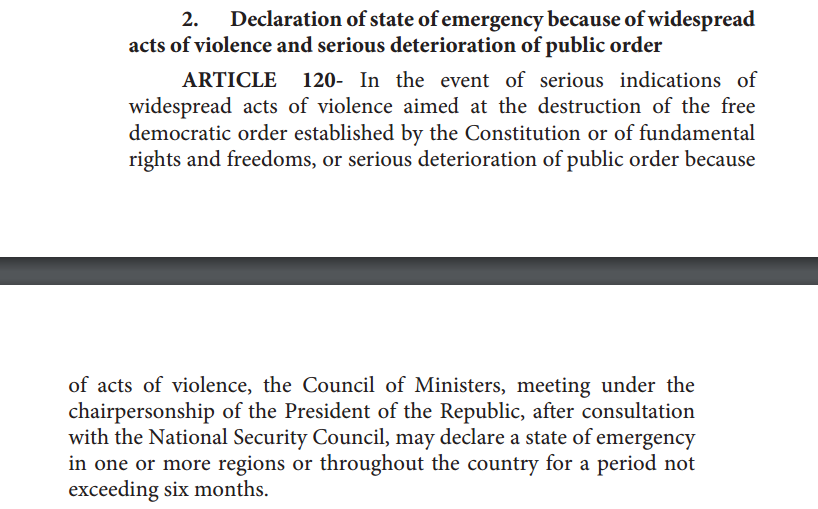 Not the answer you're looking for? Browse other questions tagged democracy turkey judiciary .

31
Why were 2745 judges dismissed in Turkey?
8
Does the 16th April Turkish referendum result actually have any meaningful effect?
20
How does the judicial independence in Poland after the reforms compare to other EU countries?
4
How often are US federal judges appointed who have never tried a case?
23
What is the US 'Deep State' and what evidence is there for it?
2
Is there a correlation between nationalism/conservatism and lack of judicial independence/rule of law?
11
Does US Supreme Court Chief Justice John Roberts have recusal power over another Justice if they don't do it themself? (e.g. Clarence Thomas)