I just got back from the dentist and was robbed blind (as usual) I do have insurance but even than I paid $1100 for a root canal, $100 for x-rays, and $400 for re-implanting a tooth that fell out. I'm talking about European health care. What's the main thing stopping it besides higher taxes? Any pools showing in favor for it?

The simplest answer is about what the polls say; which is that many Americans do want a federally funded health insurance for all. This Gallup poll from May 2016 finds 58% in favour, inclusive of 73% of those leaning Democrat and 41% of those leaning Republican.

Why Americans object to the proposed change is more complicated, and I think this relates to the differences in attitudes between Americans and others. As was mentioned by Philipp; the National Health Care Act was sensible financially, but never got anywhere. To be explicit: America spends far more on healthcare, for a poor result, than anyone else in the world. The issue isn't that implementing a Canadian, British, or German system would be too expensive, quite the opposite. So the objection is neither pragmatic nor aspirational, it's idealistic.

That idealism stems in large part from the uniqueness of American circumstance: Americans don't often encounter alternative narratives, through the domination of their own media, the great distances between their continent and Eurasia, and the fact that most people arriving in America are doing so to assimilate into the American Dream, which creates something of a political-cultural echo chamber where political alternatives are viewed through the lens of fear, like the Red Scare, or arrogance, inspired by Manifest Destiny.

In order to try and measure this we need to examine differences in attitudes between the USA and other nations. Here is a Pew Research Center survey from April 2016. Americans are the least likely to believe that "success in life is determined by outside forces", and the most likely to believe that "hard work is very important to getting ahead in life". This helps to explain why Americans view welfare with considerable disfavour. If the consensus is that you make your own luck, failure must be due to one's choosing. According to this belief; why should one reward others laziness with generosity? 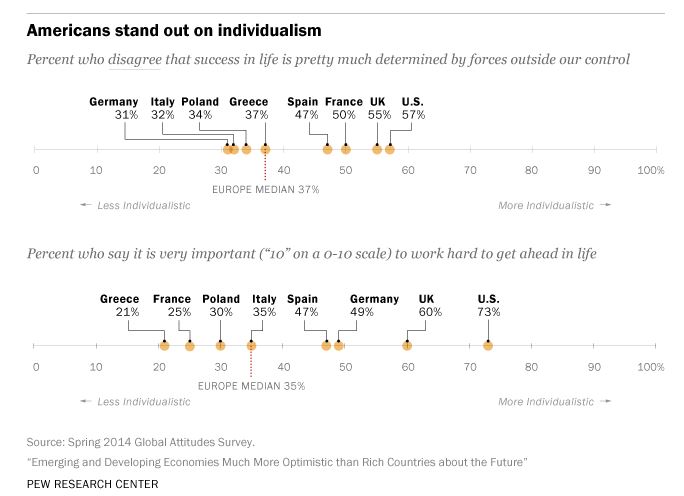 When it comes to the question of whether they believe the state should ensure that no one is left behind, against the choice for individuals to pursue life without state interference, Americans again are the most keen individualists. 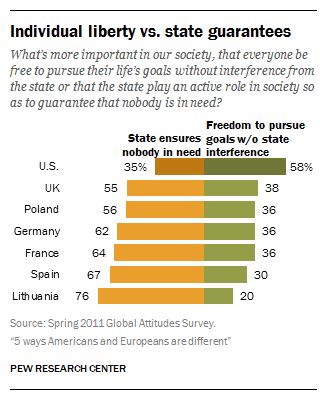 From this we start to see why the idea of government healthcare is unpalatable to so many Americans, and why distrust of the government runs so deeply. Additionally Americans may be more likely to be dismissive or ignorant of the outside world; viewing themselves as uniquely special and successful. In this case what could they learn from the rest of the world?

There are surveys to justify this argument, for example NORC/University of Chicago's National Pride 2006 paper, which found the USA to be near the top of the list. Additionally a 2015 international YouGov poll found America to be very proud of itself; this time with greater disparity between surveyed peoples. 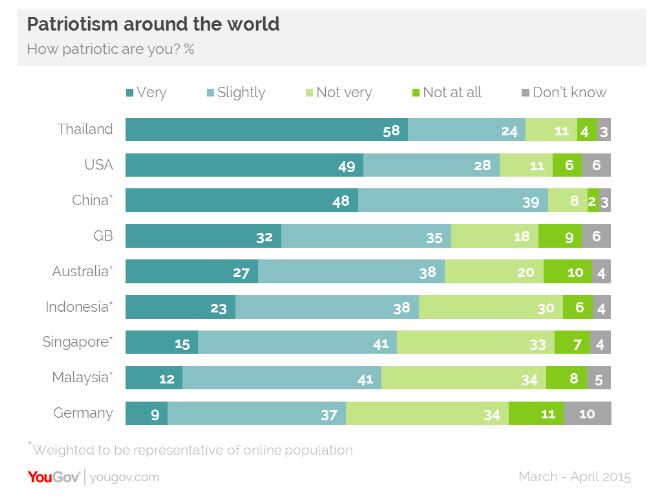 To conclude, though a slight majority of Americans are in favour of a federally funded universal healthcare system, there remains strong opposition due to widespread belief in individualism, pride in their nation, and ignorance of alternatives.

Healthcare spending is almost 20 percent of GDP, and it's expected to continue increasing. It is essentially impossible to overhaul an industry that employs 20-25 percent of the population. Socialized/Single-payer medicine could have stopped this growth, but it would have been much easier to pass when healthcare was a smaller portion of GDP.

Not the answer you're looking for? Browse other questions tagged law political-system healthcare .

11
How does the Patient Protection and Affordable Care Act (Obamacare) differ from Massachusetts health care reform (Romneycare)?
3
What problems exist with a socialist approach to health care?
5
How did health care work before Australia had medicare?
11
What are the differences between the proposed Republican health care plan and the Affordable Health Care Act?
6
Why is the withdrawal of the American Health Care Act such a devastating blow for Trump and Ryan?
4
Does the American Health Care Act include a defined list of preexisting conditions?
12
Why does Denmark spend less of their budget on their universal health care than USA does?
2
Health care ballot initiative for nurse staffing: why no compromise?
23
Why are Democratic presidential candidates promising free health care for Illegal Immigrants?