The causal relationship between economic development and democracy

First of all, your example of India is wrong. India has exploded in economic development in the 21st century, fueled largely by economic liberalization in the 1980's and free-market reforms in the 1990's and early 2000's source: Wikipedia. If anything, India is a glorious confirmation of your thesis rather than a counterexample of it.

Aside from that, the premise of your question is largely correct: When the countries of the world are taken as a whole, there is a correlative relationship between democracy and economic development, but whether or not it's a causal relationship is a matter of debate (I personally believe that it is, but there are those who would disagree with me).

There are several reasons for this:

Really, the question itself touches on the foundations of economic and political theory, and there is enough writing on the subject to fill an entire library. It's a huge topic to cover in a Q&A. But I hope this answers your question.

You might be interested in modernization theory. Modernization theory was the dominant view in comparative political science for most of the last century. Although it has since been dethroned, it is still incredibly common in research. The basic notion is that economic development causes democratization (although at some point the claim was softened to just that they are strongly correlated).

First: A Note About Generalization

What we are talking about here is a generalization of how the world works. Like commenters and other answers have pointed out - you can always find examples where it doesn't seem to apply perfectly. This is entirely normal. It just means there are things yet to be explained in the world.

Basically, the theory is just that as an economy develops it also tends to become more democratic.

This is succinctly argued in a famous paper by Philip Cutright (American Sociological Review, 28) 1. He uses some indicators of economic development and shows that the countries with high levels of economic development are also the ones that are democracies. Cutright goes a lot further (as did a lot of other modernization theorists): if a non-democratic country developed their economy, they would either have to become more democratic or their economy or devolve back to a less developed state. Similarly, if a democratic country's economy slipped it would eventually become less democratic.

Of course, this research will very highly depend on how you measure the state of an economy. Common indicators included:

The common story of modernization theory begins with an undeveloped, authoritarian government. With time the economy grows, resulting in higher wages and standards of living. Once they have leisure time, people will want education, better quality of goods, and entertainment. These people will increasingly demand better education for their kids (so they can also find good jobs), basic freedoms to express their views, and government support for programs that will improve their lives (such as social welfare programs or education funding). At this point the government will either cave to that pressure and democratize, or it will crush democracy movements (in turn destroying the kinds of citizens it needs to maintain its economy). 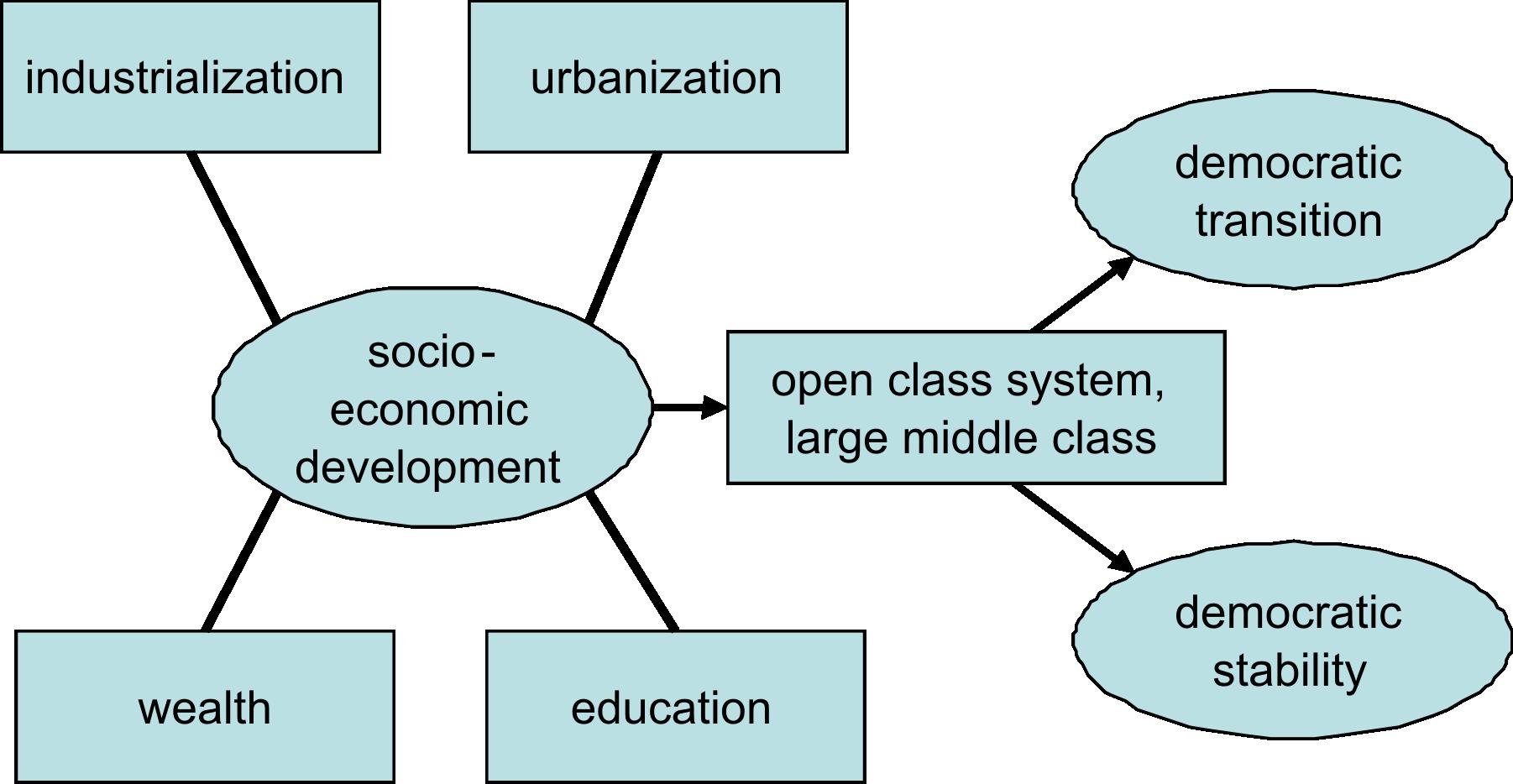 It is trivial to locate a wealth of academic papers and books supporting these hypotheses. Just search Google scholar for "modernization" or something similar ("modernization theory", "Modernization hypothesis") and limit your search to articles published before 1990.

I mentioned in the intro that modernization theory is no longer the dominant view of comparative political science. There are some (imo - very good) reasons for that.

First, there is a strong built-in bias toward Western (European/American) societies. "Modernization" means a modern European or American economy. This precludes the possibility that a rural nation could ever be modern (because one of the chief measurements is urbanization!). Similarly, the idea of "democracy" was modeled after European and American democracies of the time and completely disregarded the growing democracies in Latin and South America.

Second, a lot of disconfirming evidence was found. Throughout the 1980s and 1990s we observed the economic growth of Asian economies (Singapore, China) as well as the petro-states (Venezuala, Saudi Arabia). Although revenues were growing and their economies were developing according to the indicators, they never became democracies. In many measurements, these nations were competing with or topping the European nations. The democratization that modernization theory predicted never happened. Of course, you could argue that they didn't wait long enough - contemporary events in China and the Middle East certainly look a lot like the predictions of modernization theory.

Finally, there was a lot of disagreement about whether the economy was actually causing democratization, or whether the two just happened at the same time due to some other (unknown) factor.

Democracy outside of the West does not necessarily have a relationship with economic growth.

IMHO, economic growth is better explained by culture and economic model than by whether a government is democratic. Consider that the major developed countries are in Europe, North America and East Asia, and that within Europe the economies generally grow richer as you move north. Let's consider some of these.

Northern Europe vs Southern Europe: Northern Europe was more affected by the reformation, and part of that was a belief that children should be educated so they could read the Bible on their own rather than being lead by a priest. Was having a culture of education a significant factor?

Looking to Asia we find that the examination system that goes back hundreds of years made education extremely valuable. And we see those cultures have had strong economic growth throughout much of history. The big exceptions are/were North Korea and China where communism held them back for decades. Also adding to the case for culture being important, it has been noted in southeast Asia the Chinese minorities get some of the Jewish treatment. People despise them for being wealthier than those around them. So it seems that Chinese culture often leads to prosperity even when people leave China. As I understand it, European Jewish culture also places a higher than average emphasis on education due to historical reasons.

Consider also what happened after WWII. Everyone was bombed to smithereens. But it was the same cultures that had prospered before that rose from the ashes. Every culture experiencing wealth today has a history of wealth in its past. Japan rose from nothing to a major world power in the 80 years before WWII. It rose form the ashes afterward. Germany similarly rebounded. Taiwan and Korea were Japanese colonies and Japan had greatly strengthened the education system in Taiwan (not sure about Korea) and those countries took a little longer but they grew quickly too. Singapore and Hong Kong, with both Chinese culture and English government culture grew quickly.

Meanwhile the cultures that have always been poor continue to remain poor. Spain has never been an industrial leader, nor have any of the countries of Central and South America that were colonized by Spain and Spanish settlers. Sub-saharan Africa has never been rich. The richest most stable country there is the one governed by European settlers the longest.

On the other hand, countries populated by English settlers have all been wealthy whether they occupy a huge continent or whether on an island in the Pacific that they share with Hobbits. I think it is culture, not race. Consider that America has assimilated immigrants from all over Europe and even much of the world, and those immigrants have done well in America. It isn't their race, it is the adoption of the English cultural values that have proved successful all over the world.

Countries become democratic when somebody tries to do it. It can be the political elite, oligarchs, militas, or an external force.

The question is: who tries to achieve democracy, and who opposes it?

In China and the Middle East, the political elite doesnt want a democratic reform, the businesses dont care and the people think they cant do ir or they dont care either.

Of course there is no connection. In 19th century the most economically powerful country in Europe was Germany, a conservative monarchy. India is even hardly can be called democracy, it is rather plutocracy.

Also, real democracy cannot exist in capitalist society because the majority of property is privately owned so cannot be controlled by the public. So, there is no country that is in the same time capitalist and democratic.

3
Is there any evidence that democracy is linked causatively with improved outcomes?
12
Is there a correlation between political system and economic growth?
4
Is there a generalized theory on why nation states become democracies or autocracies?
0
Why do developed countries favor democracy?

14
Can the Chinese government system be considered a limited form of democracy?
3
Do public referenda overrule political rights, or are they an expression of democracy?
6
Can compulsory voting increase the quality of a non-dictatorial republic democracy?
9
What is special about a Jeffersonian Democracy?
61
When is a democratic vote actually the wrong tool?
4
Can IMF encourage countries to Democracy in exchange of loans?
1
Does the populist rise in Europe prove that intra-party democracy is not working?
5
Are autocratic countries handling COVID-19 better than democratic countries?