Why would the Russian Annexation of Crimea be illegal?

Hillary Clinton answered a journalist's question about Trump appearing on the Larry King Show, a Russian State TV program. She called the annexation of Crimea was illegal. But, there was a legal process for it (the 2014 Crimean referendum). Why would it be illegal since the 2014 referendum showed that the population of Crimea overwhelmingly (96.77% in Autonomous Republic of Crimea and 95.6% in Sevastopol) desired to reunite as a part of Russia?

Under the UN charter, military force can only be used for self-defense or when deployed be the international community for collective security. 'Collective security' is to be determined by the UN Security Council.

The Problems with Crimea

The central problem is that Russia used military force to annex Crimea. The use of force there without the approval of the Security Council (or in self defense) is a violation of international law.

You can find this legal analysis present in many places:

Russia offered at least two answers to this argument.

First, Russian nationals were conceivably under threat in Crimea. Russia does have the sovereign right (and responsibility) to protect its citizens. However, the legal notion of self-defense for states require an ongoing armed attack (ref: pg.372 of Marxsen). Without such an attack, intervention is unjustified.

Second, Russian officials defended their actions on the basis of being invited into Crimea. Both Russian officials and the Ukrainian President Yanukovych have confirmed that this was true. The legal arguments against the intervention by invitation claim mostly center around whether Yanukovych could legitimately claim to represent Ukraine. It seems that although he was not actually impeached by the legislature, he had vacated his role de facto.

First of all, the referendum was illegal according to Ukrainian law, because in Ukraine a referendum cannot be conducted in only a part of the country.

Second, the referendum was conducted with the support of the Russian Military, which is a violation of the UN Charter and the Russian-Ukrainian treaty about Russian military presence in Crimea (the quotas were exceeded), and of course, the Ukrainian law which disallows foreign soldiers from exerting force on Ukrainian Police and Army.

Since many Russian units participated under a false flag, without any insignia on them and refused to confirm they were from Russia, it constitutes a violation of the Geneva Convention.

But the referendum was not the exact cause of Crimea's declaration of independence. It was just a propaganda and justification tool. What makes the whole annexation thing illegal is the following paper signed by Putin: 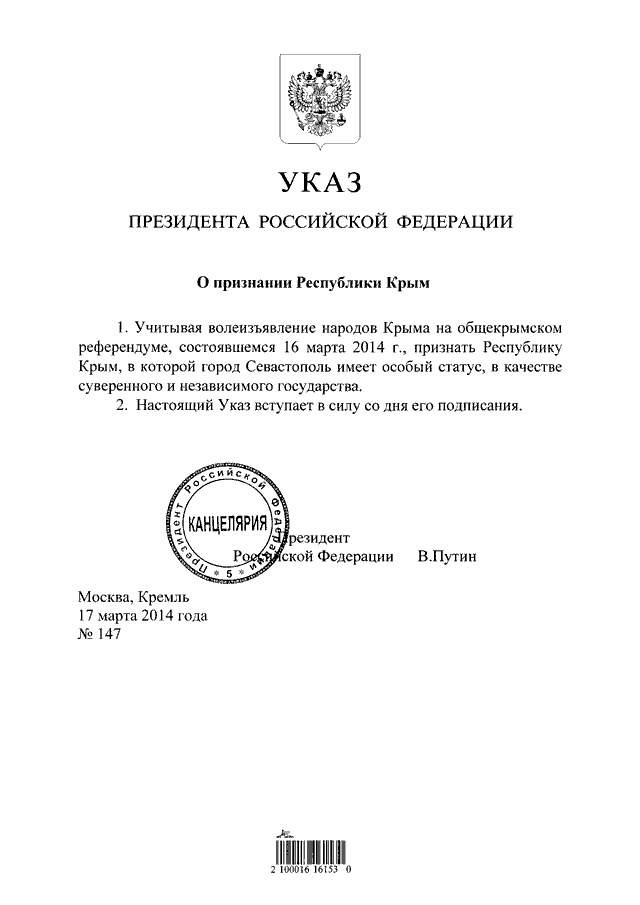 It is the presidential decree on recognition of the sovereignty of the Crimean Republic, and it openly violates the UN Charter.

Since half of the world violates international law, why cannot Russia do the same?

Aside from the reasons listed in other answers, the annexation violated at least two treaties Russia agreed to honor:

Actually I think that you already partially answered your question. Do you believe that in a referendum on a controversial issue a result of 96.77% is plausible. Or maybe is simply too good to be true?

Mock voting under guns of Russian special forces actually is not considered as legal way of changing borders (at least outside Russia). The only real referendum was there in 1991 and actually local population voted (with slight margin) on becoming part of independent Ukraine. https://en.wikipedia.org/wiki/Ukrainian_independence_referendum,_1991

13
How Many Russian Citizens Live in Crimea?
6
Does the Russian economy profit from Crimea accession?
4
Can French President decide the recognition status of another territory/state?
17
How can EU/USA consider Russian presidential elections legitimate if non-Russian citizens in Crimea will be able to take part in them?
8
Why did Vladimir Putin’s approval rating increase substantially after the annexation of Crimea?
8
Did Putin admit to giving the order to send the "little green men" into Crimea in an interview?
7
What would NATO's obligations have been if HMS Defender had been attacked near Crimea?
6
Why would the international sanctions against Russia after invading Ukraine in 2022 work while sanctions after the 2014 Crimea crisis didn't work?
5
Why did Russia not lose its "most favored nation" status after the annexation of Crimea?