Can Spider-Man legally register to vote (without revealing his identity) like he did in this PSA?

In the 90s, there was a PSA where Spider-Man tells people to register to vote (at their local video store, strangely enough):

At one point, Spider-Man signs his name on a voter registration form not as Peter Parker, but as Spider-Man! 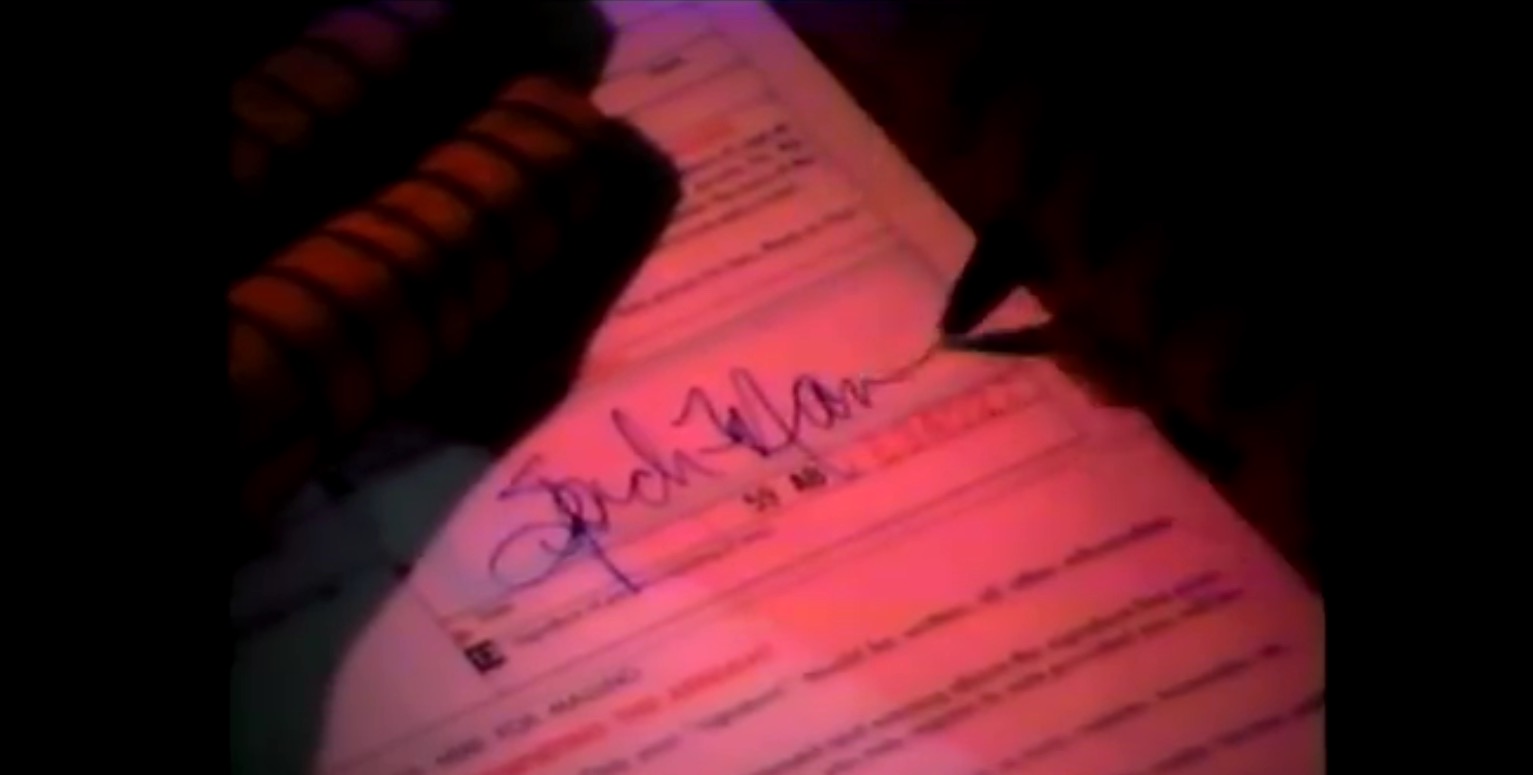 In reality, would a costumed vigilante like Spider-Man be able to legally register to vote like he does in this video, without revealing his secret identity? Let's assume he is registering to vote in New York City, since that is where he does his crime fighting.

I'm interested in today's voting laws, although if the rules were different at the time of this PSA, I'd be happy to hear about that too.

Does Spider-Man meet the requirements to register?

According to the New York Board of Elections site, here is the criteria to register to vote:

Be a United States citizen

The application form simply asks you to check Yes or No and does not require any accompanying documentation. So since Peter Parker is a United States citizen, he can truthfully check this off on his Spider-Man voter registration.

Note that there was a 2014 bill to allow illegal immigrants in New York to be allowed to vote. Should a bill like that pass, that would probably waive this requirement.

Spider-Man hasn't always been over 18 (he was in his mid teens in his early appearances), but we'll assume that he is currently eligible. Like with his citizenship, no documentation is necessary to register.

Note that when Spider-Man debuted in 1962, the minimum voting age was 21. The Twenty-sixth Amendment was ratified in 1971 reducing the age to 18.

I believe that Spider-Man could pass this requirement without providing a documented address because homeless people are allowed to vote in New York. From the National Coalition for the Homeless (emphasis mine):

Plaintiffs challenged a New York State Election Law provision forbidding people living on the streets from registering to vote. The District Court held that the New York City Board of Election’s application of the residency requirement disenfranchised an entire group of people, which is forbidden by the Equal Protection Clause. The court found that a person’s “residence” is the place at the center of the individual’s life and the place where he/she presently intends to remain. The court reasoned that people need only have a specific location that they consider their “home base” — the place where one returns regularly, manifests an intent to remain, and can receive messages and be contacted.

Spider-Man could consider New York City his "home base", since he returns to it regularly, manifests an intent to remain, and can receive messages and be contacted (which he often does by various signals or a notice in the Daily Bugle).

Not be in prison or on parole for a felony conviction

Despite all the crimes that he's been accused of, Spider-Man has been fortunate enough to avoid prison and parole, so he has no problem with this.

Not be adjudged mentally incompetent by a court

J. Jonah Jameson may call him mentally incompetent, but a court never has.

Not claim the right to vote elsewhere

So could he actually vote on Election Day?

First time voters in New York are required to provide identification on Election Day. From the online registration form (emphasis was in the original):

We’ll try to check your identity before Election Day, through the DMV number (driver’s license number or non-driver ID number), or the last four digits of your social security number, which you’ll fill in below.

If you do not have a DMV or social security number, you may use a valid photo ID, a current utility bill, bank statement, paycheck, government check or some other government document that shows your name and address. You may include a copy of one of those types of ID with this form— be sure to tape the sides of the form closed.

If we are unable to verify your identity before Election Day, you will be asked for ID when you vote for the first time.

Spider-Man doesn't have a driver's license (despite the fact that in one incarnation he had the Spider-Cycle) or a social security number, so he can't use that. Since Spider-Man doesn't have utilities or a bank account under his name. However, he has gotten paychecks before, like in his first appearance in Amazing Fantasy #15 where he worked as an entertainer: 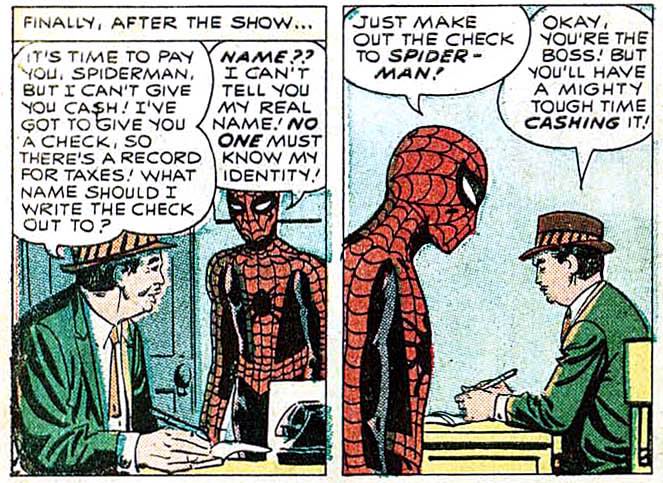 However, there is the option of a government document with a name and address. Presumably S.H.I.E.L.D., being the branch of a government that deals with superheroes, could issue such a document. If nothing else, some sort of government dossier that says "Spider-Man, works in New York City" would meet the letter of the law.

With either a paycheck or a government document, Spider-Man would be legally allowed to vote.

Will he have to prove it's him on Election Day?

One issue that Spider-Man might face is same one he faced when trying to cash a check in his first issue: how can he prove he's Spider-Man and not someone else dressed in the same outfit? Given the number of supervillains who have tried to impersonate him over the years, it's not an unrealistic concern. Probably he could get another superhero (Tony Stark?) to sign an affidavit saying that it is him.

Can Spider-Man vote if he signs an affadavit?

As of 2012, New York allows voters to cast ballots by affadavit saying that they are legally registered to vote. This was due to Hurricane Sandy destroying many polling sites, so voters were allowed to go elsewhere to vote. Since polling sites only have records for their own voters, a signed affadavit was permitted.

Given all this my answer is that Yes, Spider-Man can register to vote and would be legally allowed to actually vote on Election Day. However, he's going to have a lot of public opinion resistance from J. Jonah Jameson (and renewed calls for Voter ID laws in future elections) if he does so.

Technically yes. Spider-man could register to vote with out an ID. However after the registration is submitted then it goes through the process of being approved and assigned to the proper districts. Chances are in this case the registration would be flagged, and if and when spider-man went to vote he would be given a provisional ballot and might be required to provide some proof as to who he was and that he should be allowed to vote.

The other thing to note is that the registration also requires an address. Its going to be tough to keep his secret if he lists Aunt May's house. And if he had a secret lair like his nemesis the Green Goblin, then listing that would mean he would now have a usedtobesecret lair. And if he were to register as both Peter Parker and Spiderman then he would be violating the law basically the same as if he tried to do it as Uncle Ben. Unless he is in Chicago then he would probably find that someone has already registered as Uncle Ben, but that probably would not stop them from letting him register as long as he was registering as a Democrat.

Not the answer you're looking for? Browse other questions tagged united-states voting voting-registration .