The result in the Brexit referendum on whether Britain should leave the European Union or remain a member was 51.9% Leave, 48.1% Remain. Is there a good estimate of how British citizens voted? I mean the voters who were British citizens, not those who had a vote but who weren't British citizens, who included many residents of Britain who were citizens of the Republic of Ireland or of a Commonwealth country such as Australia, Canada, Cyprus, India, Malta, New Zealand, Pakistan, or South Africa.

Among British citizens who voted, was there a majority for Leave or Remain?

The official results didn't reveal such information. This graph by BBC shows the results of different nations within UK: 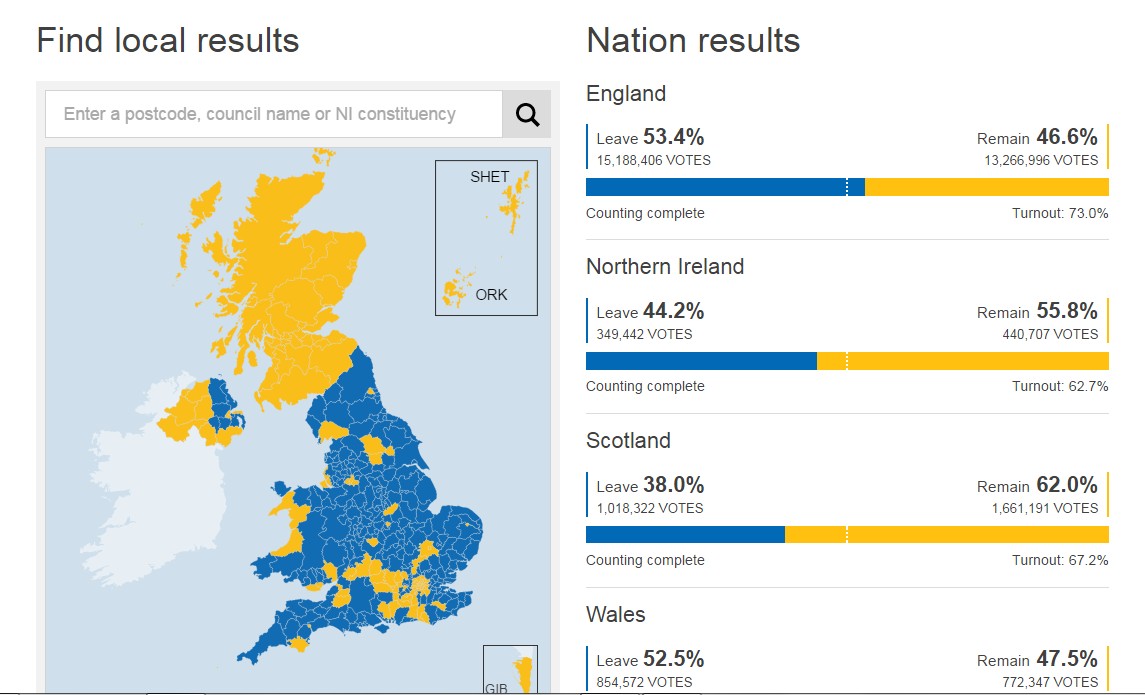 The results show that majority of voters in Northern Ireland and Scotland voted Remain. There is no official data available about how non-British Commonwealth citizens voted. According to this BBC article,

Estimates based on the 2011 census put the number of Commonwealth citizens eligible to vote in the forthcoming referendum at between 894,000 and more than 960,000.

If we accept that the number of non-British Commonwealth citizens is in this range, then we can conclude that even if all the less than 1 million of them who were eligible to vote voted Leave and all their votes were removed, then the result would still be in favour of Leave, given that Leave won by 1.3 million votes

5
Is there a good breakdown by ethnicity (white British, etc.) of how people voted in the Brexit referendum, both in Britain as a whole and in London?

14
Will the British Parliament prevent “Brexit”?
3
What is the rationale for allowing Irish and Commonwealth citizens to vote in general elections?
11
Is there a clear statement from the DUP on their position on the post-Brexit border with Ireland?
5
Is there a good breakdown by ethnicity (white British, etc.) of how people voted in the Brexit referendum, both in Britain as a whole and in London?
4
Which British parliamentary Act sets out the citizenship requirements for those who stand for election to the House of Commons?
65
Why can't Northern Ireland just have a stay/leave referendum?
14
Would it be plausible to solve the Irish Border issue by unifying Ireland?
5
A vote on the Brexit backstop
8
Was the Franchise for the EU Referendums in 1975 and 2016 the same?
2
Why didn't European Union Referendum Act 2015 require ministers to implement the referendum's majority outcome by secondary legislation?