Can a president win the electoral college and lose the popular vote?

Let me preface this by saying I'm not American (but I'm British so I can't be too high and mighty about voting systems -Brexit).

Last chance I got to look at the popular vote figures, Hillary is amazingly close (<100k votes) behind Trump. But I realise that irrespective of how many votes she gets from here on, Trump has won. So my question is:

Has there ever been an elected president who was not first by measure of popular vote (not needing 50%, just more than anyone else)?

I'm assuming there's not a long since forgotten rule that makes this an important question, but it's interesting nonetheless.

There sure have been a few instances of this occurring.

However, it doesn't actually matter since only the electoral college counts.

With this happening before, it isn't unprecedented if it happens again this year. The NYT does forecast Clinton to win the popular vote by around 1.2%.

I stumbled on this illustration here, and it's captioned:

Note how somebody could win the popular vote, and still lose the electoral vote.

This has the most effect on the way that the campaigns compete. The concept of a swing state matters a lot to the electoral college vote but not so much to the popular vote.

There have been proposals to make the popular vote the important vote. The National Popular Vote project is currently trying to convince states to bind their electors to the winner of the national popular vote rather than to the votes of their states. It currently has commitments from states representing 165 electoral votes. It only needs 105 more to take effect.

Yes. This happened yesterday. Here's why: 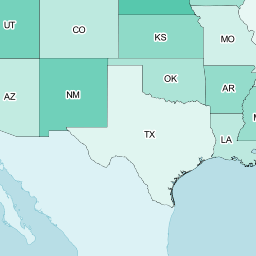 This is a snippet of a much larger map and explanation located here: http://www.slate.com/articles/news_and_politics/map_of_the_week/2012/11/presidential_election_a_map_showing_the_vote_power_of_all_50_states.html

It's very important to note that the people that go out to the polls and place their votes are not actually voting for the president. They are telling their representatives who they want them to vote for.

48 out of the 50 states have a rule that says if the majority of districts want to vote one way, then the entire state will vote that way. So it happens all the time that District 1 votes for John, and District 2 votes for Jack, District 3 votes for Jack and thus All three districts vote for Jack.

But in another way, it is legal and possible for people in a district to vote for Jack, and that district just decides instead to vote for John. This would not sit well, and those representatives would have a lot to answer for, but it would be legal. See https://www.archives.gov/federal-register/electoral-college/electors.html#restrictions

Lastly there is the "tradition" that a president should be elected by everyone. While not law, the general tradition is that the nation should "come together" to elect a president. So what generally happens is once a winner is clear, the loser backs out of the election. The general feeling is that the "great debate" is over and it's time to come together and move on.

So to answer your question it is possible that the popular vote goes for one candidate, while the electoral collage votes a different way. Generally this is thought of as a good thing as it avoids situations like the Civil War where really populated places had more political control than less populated places.

FWIW, in response to @JohnRStrom, that's not quite accurate.

Many groups used a variety of standards to determine who "really" won in Florida in 2000. Some counts using some standards showed Bush, but other counts using other standards showed Gore had, in fact, won. Sometimes the margins either way were in the hundreds or low thousands. In one case, it was Gore by 3. Not three thousand or three hundred. Three votes.

Considering that there is no such thing as a national standard, but an accumulation of votes as regulated by smaller groups of decision makers, it seems to me that we should count by whatever the rules are for the area that is being counted.

In that particular case, a review of all ballots statewide according to the standard as set by each county canvassing board during their survey: Gore by 171

Factoring in the Butterfly Ballot errors*, and the overvotes (that were tossed from the count) where people voted for Gore twice because the ballot said "Write in vote" as opposed to "Write-in vote" **, and many other factors - including the count above - it's easy to see why many people would dispute your simplified assertion that Bush won Florida.

*: Poor ballot layout design in a hugely Democratic voting area caused confusion and led some people that thought they were voting for Gore to instead vote for third-party candidate Pat Buchanan in numbers large enough to eclipse any victory margin of either Bush or Gore in any recounts. Pat Buchanan picked up 3,704 votes in Palm Beach County (where the Butterfly Ballot was used), which was roughly 2700 more than he picked up anywhere else in the state, including where his headquarters was located. Given Mr. Buchanan's positions and the demography of people in that area, some were horrified to learn that they might have voted for him accidentally. Even Buchanan himself stated openly that he didn't earn that many votes in that area.

**: Some people misunderstood that that was a space provided to add a vote for an unlisted candidate and instead thought it was an explicit instruction to also write in the candidate's name. In those cases, many voters both selected Gore on the ballot and also wrote in his name below, resulting in an "overvote", rather than counting as a vote for the candidate that they clearly chose.

Just as a pure hypothetical:

If you start with the states in increasing order of population, and assume half of each small population (+ 1) votes for one party, those votes ensure that all the state's electoral college votes go to that party.

Continue this into larger and larger states, until you reach the magic number of 270 electoral college votes committed to that party. Let all the voters in all the remaining states go to the other party.

You'll find that the winner of the electoral college become President with around 22% of the popular vote.

All highly artificial and never to be seen. But it shows how the Electoral College skews the popular vote...

Yes there was. In 2000, Al Gore received the most votes but George Bush became president.