What do these regions, that voted for the Democratic party in the 2016 election, have in common?

Reading this post and being inspired by the question: What is this line of counties voting for the Democratic party in the 2016 elections (the region labeled in the green color), we may wonder what are the common/combined/mixed factors of the following regions circled in the yellow, the purple-pink, and the blue regions that have majority voting for Democratic party in the 2016 election?

Are those regions simply occupied by big crowded cities or metropolitan areas? Or there are some other factors? (Great Lakes regions, near Mexico, near universities/colleges, west-coast blue regions, etc.) 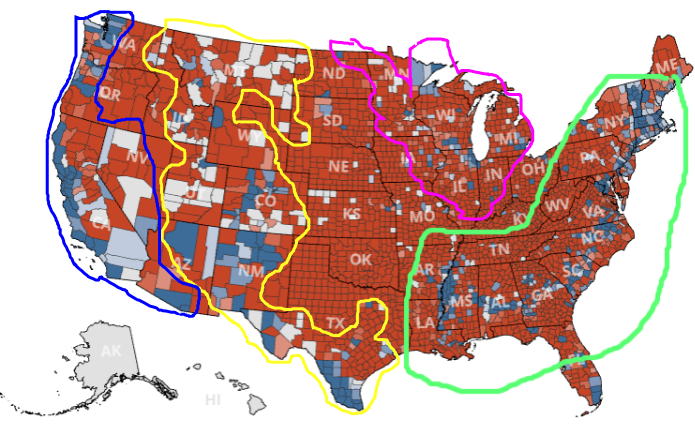 Some are regionally different:

Some are urban areas surrounded by urbanized and/or high-education suburbs:

Some are just cities themselves:

As discussed in the other question, there are really three areas in the green: African-American, urban, New England.

That's also true of the other areas. Seattle, WA, coastal California, and Southern Arizona are all in the blue but have different reasons. Some of the yellow is just cities, while other parts are Hispanic and the Northern portions have their own basis. Montana, Wyoming, Idaho, and Utah have relatively small populations, so relatively small enclaves of Democratic voters can swing a county. In the pink, Michigan, Indiana, Illinois, and Wisconsin are primarily Democrat in cities. But Minnesota and Iowa have more rural areas.

The one semi-constant is population. Even in places like Wyoming, it's the urban areas that vote Democrat. The difference in Wyoming is that a large town or small city may make up most of the population of the area. In sort of medium populated areas like Pennsylvania, Kansas, or Louisiana, such small urban areas are outweighed by the rural population. It's only the larger cities that show up as blue counties.

Women were also more likely to vote for Clinton but are spread out much the same as men. Not useful for explaining trends in counties or map regions.

64
What is this line of counties voting for the Democratic party in the 2016 elections?