It seems that a very high percentage of the Iran's oil revenues will be spent on buying arms:

It is not big, specially comparing with Iran enemies in the region (Israel and Saudi); As you see in the following images: 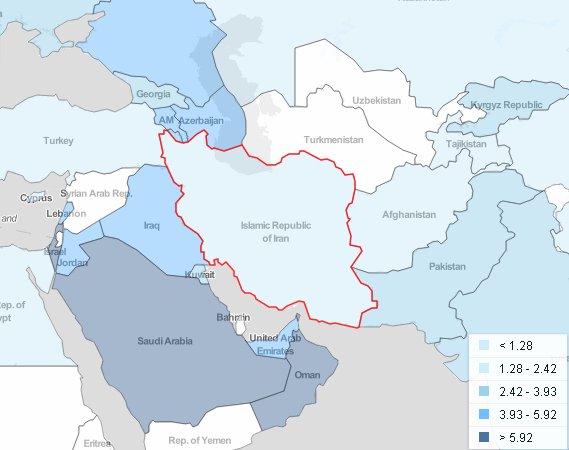 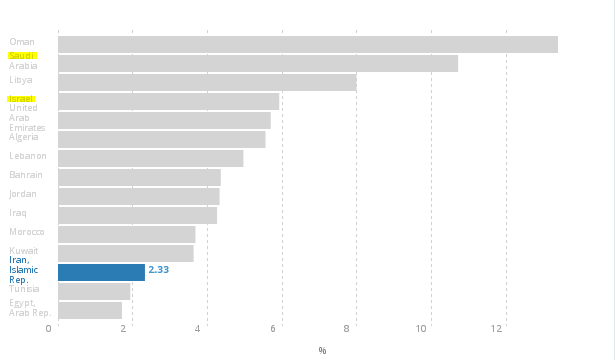 According to this report by the Stockholm International Peace Research Institute, "Trends in World Military Expenditure, 2015":

Iran’s military expenditure decreased by 30 percent between 2006 and 2015, with spending in 2015 standing at $10.3 billion. The main fall occurred in 2012–13 after the European Union imposed a series of economic and financial sanctions against Iran in January 2012. The lifting of EU (and some US sanctions) in January 2016 is expected to boost the Iranian economy and may lead to a rise in military expenditure.

Such expenditure should include

About Iran's more recent expenditures, this article published in 25 April 2016 (by a seemingly anti-Iranian government source) states that:

Despite considerable reduction in the overall budget, the military and security budgets have increased. On April 10, ISNA quoted Mohammadreza Pour Ebrahimi, a member of the parliament’s Economic Affairs Committee, as saying: “In addition to the approved figures, $1.5 billion has been allocated to prop up defense of the country and this amount has been approved by this committee.”

According to this report, the military and security budget has increased from $15.6 billion to around $17.1 billion. At the same time, the budget for education, research and health has been cut.

These figures account for a larger value than the SIPRI's one, but they added the "security" expenditures too (a possible bias).

In this 19 April 2016 Associated Press Big Story short article, it is stated that:

(...) According to media reports, the bill [the 2016 budget] has a five percent increase for the defense budget, though there were no details.

Some 25 percent of the country's budget comes from exporting oil. Iran is home to the world's fourth-largest proven reserve of crude oil and ranks second in proven natural gas reserves behind Russia.

And this Al-Monitor (a media site focused on Middle East which was accused of following "the agenda of the Iranian and Syrian governments and Hezbollah") article details a bit more the military budget and the growing trend of Iran's military spendings, although it does not state the current total defense budget and its numbers are considerably lower than SIPRI's for the past years, maybe because the fiscal year used in this article begins near 20th March:

In the fiscal year that began March 20, 2013, the first five months of which took place during President Mahmoud Ahmadinejad’s last year in office, Iran’s total defense budget was $6.24 billion. In the following fiscal year, beginning March 21, 2014, marking Rouhani’s first full year in office, the defense budget grew by $1.85 billion, bringing the total to more than $8 billion.

The increase was mostly because the Rouhani administration had to allocate additional funding to the IRGC (aka Islamic Revolutionary Guard Corps) for its spending in Syria, Iraq and Yemen. In other words, the IRGC, which was allocated $3.3 billion for fiscal year 2013-14, saw its budget grow to some $5 billion during Rouhani’s first year in office. This amount is separate from the revenue the IRGC brings in from the major economic enterprises in which it is involved.

For the first time in decades, however, the army’s budget is being increased by about 15%, from $1.5 billion to $1.75 billion. The Ministry of Defense, which is responsible for supplying military equipment, will also see an increase in allocated funding, from $770 million last year (ending March 19) to $890 million in the current fiscal year. The Basij and the General Staff have meanwhile each been allocated some 10% more in spending.

In contrast, the IRGC has had its budget decreased by some 16%. The $900 million cut brings its total budget allocation to some $4.1 billion. Although the decrease is considerable, the IRGC’s budget in 2013-14 clearly shows that the funding allocated is sufficient to cover all its costs, except for foreign expenses.

Not the answer you're looking for? Browse other questions tagged russian-federation military china iran .

8
Iran's list of designated terrorist organizations?
29
What plans do European countries have if Russia closed gas pipelines to them?
3
How does "the military" control Pakistan?
1
Does the U.S. military have the means to spend a lot more than the allotted budget for the military?
1
How exactly will the US restoring sanction waivers on Iran's civilian nuclear activity help Iran?
3
How do Russia's military options in Ukraine in 2014 compare to the present day?