What prompted the high turnout in presidential elections from 1840-1896?

After reading about the recent election and hearing that the voter turnout was somewhat lower than in the last two cycles, I went and found this page from UCSB, that listed voter turnout percentages from 1824 to 2012. 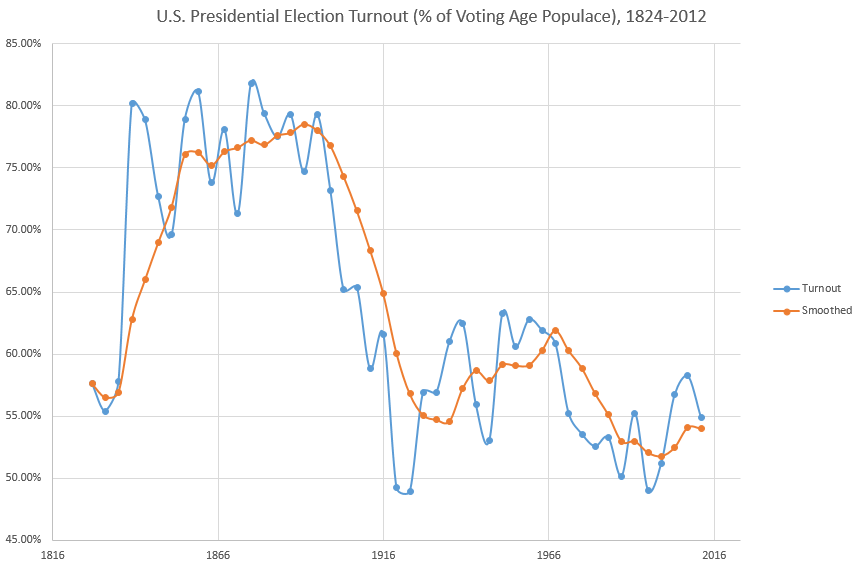 Were there social or political reasons why the turnout dropped so dramatically around this period compared to before? There are three data points that suggest that the turnout was lower in the 1820's (~55%), so if they are to be believed, why was there a large increase in turnout starting in the 1830's?

This article mentions several possibilities (changing demographics, elimination of fraud, etc.) but ends up with the 1840-1900 period being a period of particularly high partisanship. For example, in 1858, there were no claims of media neutrality. There were Lincoln papers and Douglas papers.

Afterwards, the states settled into Republican and Democrat states. If you lived in a Republican state why bother voting? The Republican would win in the end. And vice versa for the Democrat states. Turnout only matters in "swing" states, where the result can go either way. And in some years, it doesn't even matter there. In the landslides of 1964, 1972, and 1984, the result was known beforehand.

Not the answer you're looking for? Browse other questions tagged united-states presidential-election voter-turnout .

8
What are the main differences between US First Party System and Second/Third Party Systems?

5
Is Donald Trump the main reason behind the dramatic increase in Republican primary turnout?
6
Why was the voter turnout so low in the second round of French elections?
6
Did only retired people vote in a majority for the Conservatives in the UK 2017 General Election?
6
Why is the voter turnout at EU level so low compared to national elections?
6
Has anything been published about how YouGov determined the figures they are using for predicted turnout by age?
9
What explains the record turnout in South Korea's elections, despite coronavirus fears?
0
Why did the turnout rise so much in the governor's elections in some states?
2
How does turnout in US elections compare across states?
4
Does arresting specific types of people for voting illegally discourage those types of people from voting?