Why is abstaining so common in the UN General Assembly?

In the UN General Assembly, abstentions are fairly common. For example, this vote about Nazism had far more abstentions than oppose votes.

Why are abstentions so common?

You should note that the votes in UNGA (United Nations General Assembly) on such political issues are nothing but symbolic and aren't always binding. In other words, they mean just political declaration or opinion. Therefore, not all the participant nations take a political agenda very seriously unless it affects their or their allies' interest directly. For example, United Nations General Assembly Resolution 68/262

was adopted on Mar. 27, 2014 in response to the Russian annexation of Crimea and entitled "Territorial integrity of Ukraine".

As you can see in the link, 10 countries (11 including Russia) such as N. Korea, Venezuela, Syria, etc. maintaining close ties with Russia rejected it and 58 countries which are not close enough to introducing and approving countries abstained and 24 countries were absent.

The non-binding resolution, which was supported by 100 United Nations member states, affirmed the General Assembly's commitment to the territorial integrity of Ukraine within its internationally recognized borders and underscored the invalidity of the 2014 Crimean referendum.

Russia's annexation of Crimea didn't affect other unrelated countries as much as it did Ukraine and it is not surprising that so many countries voted to abstain or didn't even participate in the voting.

It has to do with international relations. If a big country (say, the US) votes against, but you want to vote for, you abstain to stay in good terms with the US. Good terms can mean here financial, military support.

Here is a The Economist article (only available for people who subscribed) that explains how some countries decide to vote in the UN.

Brief summary of the article:

UN resolutions condemning North Korea should be voted almost unanimously, as North Korea has one of the worst records on earth. But on one instance, 19 countries voted against and 48 abstained, probably because China gives aid to countries that votes like it. AidData, a project based at the College of William and Mary in Virginia, reckons that if African countries voted with China an extra 10% of the time, they would get an 86% bump in official aid on average. (The relationship is not a simple one, as the poorest countries receive the greater aid either way)

The image below gives estimates of change to aid received by African countries from China, if they were to vote differently. 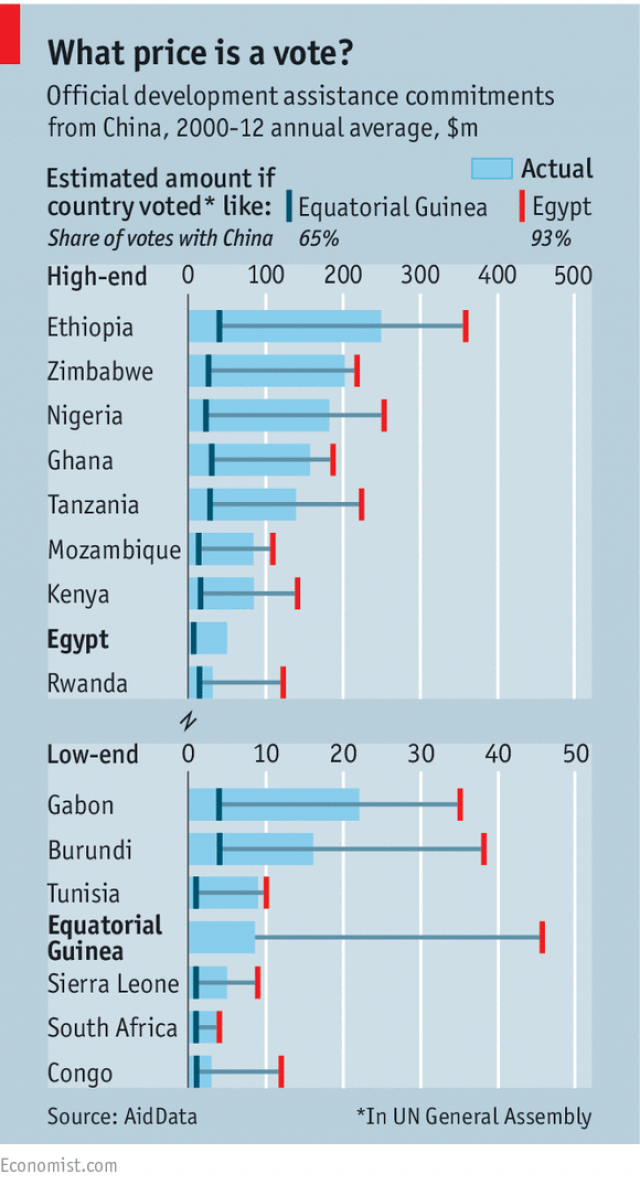 Not the answer you're looking for? Browse other questions tagged voting united-nations .

8
Why hasn't the UN invoked "Uniting for Peace" in Syria?
18
What is the legal background for Russia's seat as a Permanent Member of UNSC?
8
Who can get UN kicked out of New York City?
1
Does the UN have any internal safeguards applying to its resolutions?
4
Do the UN Security Council's policies include any way to pass a resolution when one member vetos?
3
What does a country need to do get rejected by the UN?
2
Electing officials by least disliked or the candidate that creates the least "resistance" among the voters
10
Can the permanent members of the UN Security Council also veto UN General Assembly resolutions?
3
What does “recommendation of the security council” involve in the UN charter
4
What would happen if the US did not pay its yearly fees to the UN?