When the UK parliament passed the 2016 EU referendum, did MPs support a 50% threshold?

Quoth AC Grayling, writing in The New European in October: 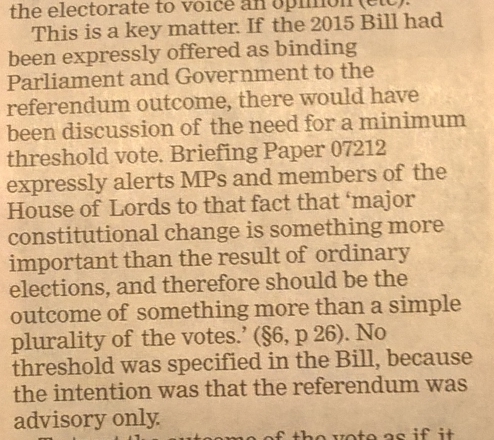 This is a key matter. If the 2015 Bill been expressly offered as binding Parliament and Government to the referendum outcome, there would have been discussion of the need for a minimum threshold vote. Briefing Paper 07212 expressly alerts MPs and members of the House of Lords to the fact that 'major constitutional change is something more important than the result of ordinary elections, and therefore should be the outcome of something more than a simple plurality of votes.' (§6, p 26). No threshold was specified in the Bill, because the intention was that the referendum was advisory only. (Full text)

Did MPs want a significantly higher threshold than 50% when the bill was debated? Did anyone specifically go on the record favoring a 50% threshold (against this briefing paper) during the debate?

Although no MP went on record favouring a threshold, when the European Referendum Act passed to the House of Lords, the issue of a threshold was discussed.

Firstly, on October 13th, 2015, the issue of a threshold was discussed, in particular by Lord Wallace of Saltaire, who noted in his contribution:

The noble Lord, Lord Norton, and other noble Lords raised the question of threshold, which clearly we will have to explore a little, although it is a very difficult issue. Whatever happens at the end of it, if we have a narrow majority, either with a low or a high turnout, it will not settle the issue. However, we all know that referendums do not settle the issue.

This seems to imply that he supported a higher threshold than 50%. Later on, on November 4th, Lord Kerr of Kinlochard noted:

It is important to note that we have no threshold requirements in this referendum and we have had no amendment in Committee proposing that there should be a threshold. That is constitutionally quite surprising for a decision as big as this. The precedent would lead one to think about a threshold. I would not have wanted a threshold. I would not have wanted a supermajority, as in the precedent in Scotland in the 1970s. I do not like referenda but the essence of a referendum is that you win or lose. It is clean; it is 51% to 49%, for example. If 51% are in favour of our leaving the European Union, we will leave, and we ​should not create any fudge round that. This is a yes/no decision, and if you decide to go, you go. The double referenda theory attributed to Boris Johnson, which he appears to have come off—that if the decision was to go, there would be another negotiation in which the foreigners, astonished and timorous, would come creeping, offering us far better terms to stay in—is nonsense. If the country votes to leave the Government will be required to invoke Article 50 and start the process of coming out.

So Lord Kerr would not have supported a higher threshold or supermajority, and no amendment from either House attempted to build one into the Act.

The main attempt to build a threshold of sorts into the Act was the attempt by the SNP in the Commons (see here, amendment NC3) to ensure that every constituent country would individually have to return a majority vote in order for the referendum to advise the government to leave the EU. This was later also proposed in the Lords by Lord Wrigley. Neither of these amendments succeded.

No, there was never an intended threshold, and no MP went on record favouring a threshold during the debate.

8
Why do major referendums have a 50% threshold to change the status quo, rather than a higher value?

8
How many people were barred from participating in the 2016 EU referendum because they lived outside the UK?
3
How many adult EU citizens living in the UK were excluded from the 2016 EU referendum?
3
How did Labour party members in England vote in the 2016 Brexit referendum?
23
Why did the UK not have any post-EU exit deals agreed prior to June 2016?
6
What is a "confirmatory" referendum in the context of Brexit?
8
Why is there so little support for joining EFTA in the British parliament?
18
Why did David Cameron offer a referendum on the European Union?
2
Why didn't European Union Referendum Act 2015 require ministers to implement the referendum's majority outcome by secondary legislation?