Secret ballot vs vote by mail

According to wikipedia, "The secret ballot is a voting method in which a voter's choices in an election or a referendum are anonymous, forestalling attempts to influence the voter by intimidation and potential vote buying." The idea is that to be counted, a vote must be made in a way that no one except the voter can see whom the voter has chosen. Thus, persons who could try to pressure the voter to choose one specific candidate have no way to be sure that their pressions have been effective, nor has the voter any way to guarantee to people other than himself that he has voted for a specific candidate.

Wikipedia mentions that in the US, the importance of secret ballot was realized progressively near the end of 19th century and that ways of voting compatible with this principle were adopted everywhere (with North Carolina the last state to adopt it, in 1950, long after Georgia, the second last, in 1922).

However, nowadays, most states allow mail votes, which is not a secret ballot and offers no guarantees that the voter is not subject to intimidation or threat. My question is

When mail votes where introduced in the US, and when they became a significant part of the total votes, were there people arguing against this in the name of secret ballots? And if so, what were the counter-arguments offered by the partisans of vote by mail? Where can I find summaries of those debates?

Vote by mail does not preclude secret ballots

I am a resident of Oregon, which was the first state to move to an entirely vote-by-mail system following the passage of Ballot Measure 60 in 1998.

A good vote-by-mail process can preserve a secret ballot. In practice, Oregon's process does a reasonable job of this. Unfortunately, the codified process does not enforce this, and a few modifications would make the preservation of secrecy much stronger.

Every step of the process may be observed/overseen by any member of the public that agrees to follow some obvious rules.

Each of the three steps at the opening board are done in batches of ~200 ballots at a time (source), which provides a reasonable amount of secrecy. That is, 200 return envelopes are removed, then the secrecy envelopes are removed from those 200 ballots. This means that nobody sees a ballot with its return envelope at the same time, and batches of 200 preserve reasonable anonymity.

Unfortunately, the batch size is not codified in the official process. More fundamentally, secrecy would be much stronger if 1(b) and 1(c) occurred in batches at different stations, so that no one person sees both the ballot and its return envelope.

To more directly answer your question, however, yes, people make arguments against vote-by-mail on the basis of privacy (and also voter fraud). Unfortunately, I can't track down a copy of the official "Against" arguments for Oregon's ballot Measure 60, but political activist Bill Sizemore was and is one of the vocal opponents. You can read his thoughts on vote by mail here.

In general, however, the vote-by-mail system is quite popular in Oregon across the political spectrum, and Oregon has consistently high voter turnout relative to the national average, which is usually attributed to the vote by mail. In practice, I believe our process preserves a reasonable amount of secrecy. With the minor changes I suggest above, I think it would preserve it to at least the degree of most in-person voting systems.

This is about the situation in germany.

(Risks of) mail voting are discussed every once in a while. The general line of the constitutional court is that it should stay an exception because of the known risks - but that it is also necessary to allow people to vote who cannot come in person to voting station on election Sunday.
By now this exception has reached a magnitude of almost 1/3 of the votes.

The risks/disadvantages that are routinely discussed are not only possible breach of secrecy, but also lack of publicity/transparency and the corresponding further manipulation risks (particularly related to destruction of votes while they are on their way/stored until election day) and also that equality and a votes trickling in over weeks do not go well together.

The important advantage of mail voting is that it helps making the election general by allowing people to vote who are unable to go and vote in person.

In the end, a compromise between such conflicting principles must be found.

OTOH, there are also approaches that try to reduce the need for mail voting and provide a more in-person like procedure. E.g. special mobile election stations that go to hospitals or nursing homes so people can really nearby.

(Note that a similar compromise is in §57 BWO [federal election regulations] that specifies persons who cannot read or have a disability that prevents them from performing the voting procedure can have a helper do what they cannot do themselves - here also secrecy and risk of manipulation vs. possibility to vote are traded off.
But again, if possible tools that enable the voter to vote secretly are preferred, e.g. stencils for visually impaired or blind voters)

After the 2009 EP elections, a complaint was raised about this change which includes a detailed discussion of concerns related to vulnerabilities of mail voting BtDrucks 17/2200, p. 61ff.

In 2013 the Bundesverfassungsgericht (federal constitutional court) decided in a decision on a complaint about the election for the European Parliament 2009 that mail voting without requiring a reason is constitutional
BVerfG, Beschluss des Zweiten Senats vom 09. Juli 2013 - 2 BvC 7/10 -, Rn. 1-17
Abstract in English

However, mail voting is not what I'd call a small fraction of the votes (and it was already then more than 1/6 of the votes): 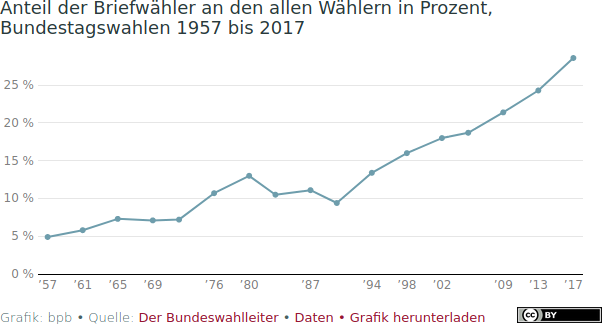 In other words, one out of 3 - 4 votes was cast by mail in the last federal election.

An in person secret ballot itself is not a guarantee against intimidation, threat, or bribery, it just reduces the odds somewhat. There are other ways. Examples:

Voting by mail, whatever its intrinsic vulnerability to bribery or coercion may be, is clearly less vulnerable to some of the above exploits, (particularly bottlenecks on voting day, unless the exceptional case of a corrupt postmaster occurs...), therefore when comparing voting by mail to voting in person, we should weigh not just the dangers of each, but also their relative benefits.

When mail votes where introduced in the US...

and when they became a significant part of the total votes,

were there people arguing against this in the name of secret ballots?

possibly, however no one to my knowledge has discovered any transcripts or video addressing the secrecy of these ballots.

That answers you posted question. However your question supposes that in-person voting is inherently free of secrecy issues. This is an myth that can be dispelled simply by recitation of US Federal Law:

Federal law dictates that during federal elections, all polling places have to be accessible to disabled voters or else provide some alternative way to cast a ballot. The law also says that voters with disabilities and voters with limits on their English skills can get help voting from a person of their choosing.
That means if a voter has trouble reading, or English is a second language for them, they can bring someone to help them vote — as long as that person is not the voter's employer or associated with a labor union the voter might belong to. Link ADA Link HAVA Act

Not the answer you're looking for? Browse other questions tagged united-states election ballot .

6
What is the rationale behind secret ballot by country at the UN?
5
Is there less risk that my vote will be tampered with if I vote by mail/absentee?
3
In a California election, can you obtain the ballot of your choice on your own?
5
What are the repercussions of a poorly designed ballot?
16
What fact-based arguments exist that mail-in voting would lead to significantly higher instances of US voter fraud?
36
Ballot Secrecy - is it a Voter's Privilege or a Voter's Obligation?
24
Are there proposals for preserving ballot secrecy when a candidate scores 100% in a very small polling station?