Why is there shown an electoral vote for Trump in Maine on the Wikipedia?

In the Wikipedia article for the results of the 2016 US Presidential Election, it shows 1 red vote in Maine: 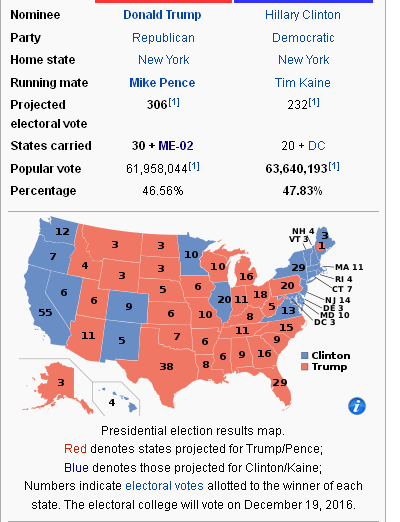 Also, the "States carried" says "ME-02". What does that mean? I thought winning a state meant the winner gets to select the electors for that state.

Maine and Nebraska award their electoral college votes to the winners of each congressional district. That's two votes to the statewide winner (Senate seats are statewide and there are two per state). And one vote for each House district.

ME-01 means the first congressional (House) district of Maine. The voters there voted for Hillary Clinton. ME-02 is the second congressional district of Maine. Those voters voted for Donald Trump. Overall, Maine voted for Clinton, so she received three votes, one for ME-01 and two for the state. By convention, they only mention explicitly the vote that does not align with the statewide vote.

In 2008, the same thing happened with NE-02 which is the Nebraskan district for Omaha. Barack Obama won the urban district but lost the other two.

23
Which US states give proportional Presidential electoral college votes to candidates?
8
What voting system is used (in the majority of states) for the US presidential (electoral) vote?
16
In 2016, why did the GOP win the House popular vote while Clinton won the popular vote?
6
Was the Democratic vote less efficient in 2018 than in 2016?
5
Can the House change how the contingent vote for President works?
12
What would happen if the National Popular Vote Interstate Compact was ratified between a presidential election and when the electoral college votes?
0
Why may one be "faithless" if "winner-takes-all" is already applicable?
11
What does the December 8th deadline mean for the certification of the results of the Electoral College?