Does Donald Trump have a position on funding of United Nations?

There exists a populist right wing opinion[1] that UN funding from US should be meaningfully diminished (or US should get out of UN, as the more extreme position), due to UN pursuing agenda that is often anti-US-interests.

Does Donald Trump have an position on the topic? (either explicit, or inferred by specific cabinet picks?). 2016+ position preferred, but past statements are OK as evidence as well.

Donald Trump suggested in a tweet in September 2011, that US should defund UN if "UN grants the PA statehood". (Referring to Palestine as PA)

We must stand firm against the UN's ploy to sabotage Israel---if the UN grants the PA statehood then we must immediately defund it. 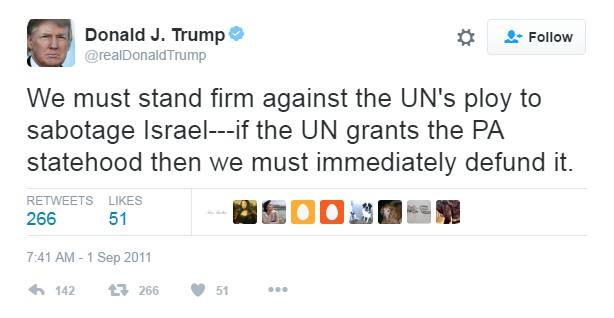 In another tweet, he said "US should look at future funding" of the UN. 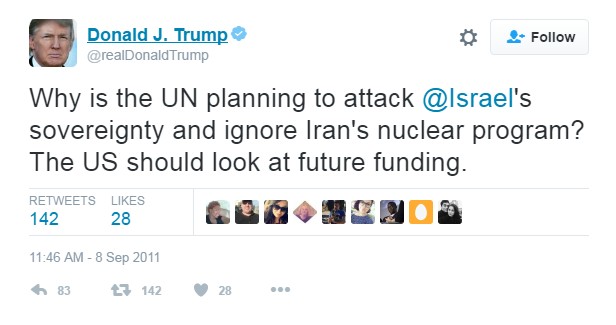 Why is the UN planning to attack @Israel's sovereignty and ignore Iran's nuclear program? The US should look at future funding.

In may 2016, Trump vowed to cut off funding to U.N. climate change programs, ABC News reported.

Donald Trump unveiled his energy vision for the United States at a petroleum conference in North Dakota Thursday -- vowing to cut off funding to U.N. climate change programs and attacking Hillary Clinton.

On Oct. 31, 2016, Trump said at a rally in Warren, Mich that he will put America first and "cancel billions in climate change spending for the United Nations", BNA reported.

“We’re going to put America first. That includes canceling billions in climate change spending for the United Nations, a number Hillary wants to increase, and instead use that money to provide for American infrastructure including clean water, clean air and safety,”

Not the answer you're looking for? Browse other questions tagged united-states united-nations .