What caused the Rep. party members' dramatic shift on views on Russia?

The recent data published by The Economist/YouGov (PDF, ##26, 28) taken on December 10-13 2016, clearly indicate a dramatic change on Republican party members' view on Russia and Putin: 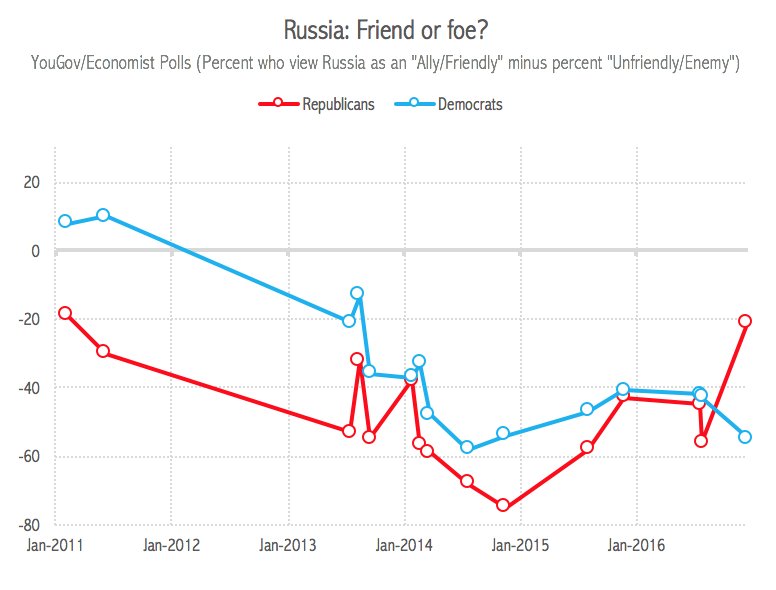 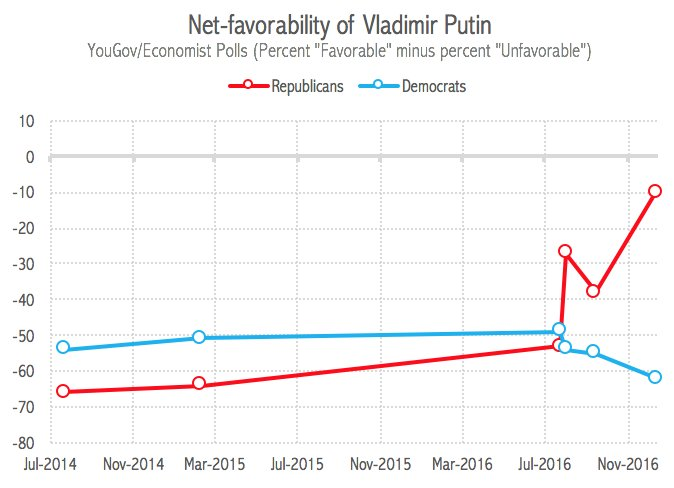 The surveys show the change was rapid (occurred over the course of just a month or two) and significant (+45% favor).

What factor made such a drastic change?

I think I perfectly understand why Russians may wanted Trump to take the power, but this apparently does not let me understand the speed and amount of the mentioned changes within the Rep. party itself.

Historically, the Rep. party was much more biased against the totalitarian regimes. The Republicans have consistently supported people like Ronald Reagan and John McCain, and the Rep. party has put all their effort to the elimination of the Russian "USSR" project back in 1980's. Now the same people do the very opposite regarding the Russian "Federation".

Did the Russians do something incredibly good in favor of the Republican party of the United States?

Can the YouGov survey data be somehow faked/spoiled?

Is there another explanation for this phenomenon?

Note that American views on Russia are pretty variable and not always in partisan synchronization. The second graph hides that as it happens to start with a long stable position. The first graph is clearer on that.

Prior to July, most news about Russia was about sanctions and Ukraine (both Eastern and Crimea). Such news was overwhelmingly negative and not particularly partisan.

In July, the Barack Obama administration criticized Russian actions in Syria, particularly its role in ending the ceasefire. Donald Trump hailed the Russians for fighting terrorism in Syria. Note that this reinforced Trump's narrative that Obama and Hillary Clinton were weak on fighting terrorism. This created a partisan divide in views on Russia.

This is somewhat complicated by the timeline on Wikileaks. In July, they released some negative information about Democrats. Democrats claimed that the Russians had released it. At the time, Trump commented that if the Russians had Clinton's deleted emails there were people that wanted to see them.

Democrats accused Trump of encouraging Russian espionage, which is rather absurd. No amount of new espionage was going to reveal the emails after they were deleted. So unless Democrats were accusing Clinton of lying about not having a copy of the emails, this wasn't going to work.

In any case, Democrats are more likely to associate Russia with losing their election. Republicans are more likely associate Russia as a potential new ally in the war against terrorism. This is somewhat reinforced by Democrats accusing Russia of helping Trump and hurting Clinton. Trump voters think that they made their own decision. So each chant about Russians interfering with the election pushes Republicans towards Russia. While Clinton voters dislike thinking that anyone could vote for Trump.

12
What are the differences between the Tea Party and the Republican Party?
23
What caused the racial shift of America's parties?
0
What explains the big "D" shift in Utah in the last 4 years?
8
What caused the SPD to gain in opinion polls in early 2017?
30
What caused a massive shift in Republican ideological trajectories in the late '70s?
3
How did Labour party members in England vote in the 2016 Brexit referendum?
18
How do Russians [especially Russian Muslims] understand Putin's disapproval of 'multiculturalism'?
6
Which party actually caused the 2016 presidential election swing?
25
What people in Russia, if any, deliberately pushed Putin into the war with Ukraine?