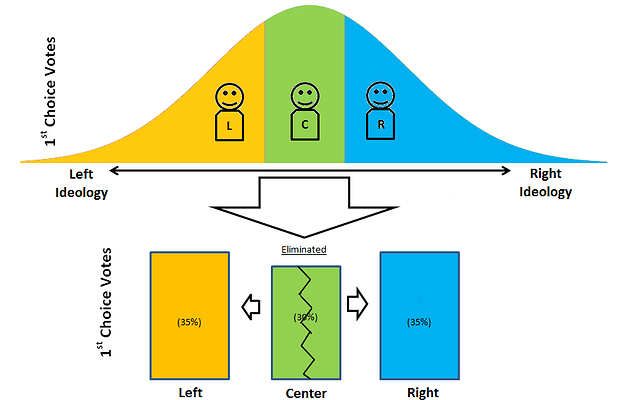 It seems intuitively to me that these are the same thing, but is that correct? Does every voting system that meets the majority criterion necessarily also have the center-squeeze effect?

The net result is that C wins over both L and R on the first round (as the Condorcet winner). So in any Condorcet-compliant method, there is no center-squeeze.

The center-squeeze only occurs in a left/right paradigm like that when only the first choice voters are counted for the initial elimination. Examples of voting systems like that are Plurality and IRV (Instant Runoff Voting; also known as Alternative Vote and other names).

Not the answer you're looking for? Browse other questions tagged election voting-systems .

13
Why not give representatives as many votes as they received in the election?
2
Voting methods other than single-vote plurality in the USA?
20
Does Gibbard–Satterthwaite theorem apply to all voting systems?
10
How does STAR Voting compare with plain Score Voting?
8
How does the Majority Judgment voting system fare?
41
What arguments are there against ranked-choice voting?
4
Why are (public) political polls typically allowed even very close to the elections despite of their apparent disruptive effect on voters perception?
3
How long does it take to count votes in different voting systems?
1
Does it make sense for different opposition groups to field one candidate in the two-round system?