Why would a school in Istanbul be asked to cancel Christmas celebrations?

A German-funded school in Istanbul has told teachers they cannot even talk about Christmas in class.

Each December, the school has a small celebration for Christmas and teaches pupils about the holiday. One week after the school's choir was prevented from singing at the German consulate in Istanbul, they canceled the festivities.

On the surface, this seems like an incomprehensible decision for a secular country. I'm wondering, what's the Turkish side of this? Has any official explain the reasoning behind the decision?

Unfortunately, these days even the good old, more trustworthy news outlets like Deutsche Welle or the BBC are not as reliable as they once used to be in general, and when they "report" on Turkey, in particular, unfortunately.

So when you see something like that you should better check it thoroughly, and as an agnostic citizen of Istanbul I find this "news" very hard to believe frankly. It just doesn't fit into the general picture!

The present ruling party with a strong Islamic tendency has in deed significantly improved the rights of religious minorities in Turkey so that for a long time it was accused of helping to set up a Vatican-like micro-state on the Golden Horn by granting so many concessions to the Orthodox Greek minority, and its two leaders (PM Erdoğan and President Gül) were even accused of having Zionist (sic!) and Armenian (sic!) connections (Mr. Gül was the first Turkish President to visit Armenia, and Mr. Erdoğan was the first Turkish PM to issue a message in memory of Armenian people massacred in 1915).

It's true that this party is not as "moderate" as it can be described simply as an Islamic version of Christian Democratic parties in Western Europe (yet?) but it's not as radical as other Islamic parties in the Middle-East either. However, it's not as far from the German Christian Democrats as Turkey's main opposition party (member of Socialist International) is from the German Social-Democrats virtually on all accounts, including the rights of religious minorities, in particular. As a matter of fact, religious minorities in Turkey have suffered most brutally during the one-party regime of that party in Turkey until the 1950s, when it fortunately steered the country toward a multi-party system in a peaceful manner, which its equivalents in Iraq and Syria, for example, could not -- another big difference between Turkey and its near and far neighbours in the south and east...

And, a few more facts: The recent shooting in Istanbul took place at a night club on New Year's Eve (nothing to do with Christmas celebrations), and neither the teaching of Christianity or Bible or any other religion, nor atheism is illegal in Turkey. All religions have lived peacefully on this land for centuries, and there "lack of tolerance" has only increased during the so-called "secular" (and nationalistic) Republic (and under the rule of the so-called "secular" party admitted to Socialist International probably with the hope of integrating it into the ecosystem of Western democracy, which has worked to some extent, but not enough to make it more liberal to religuous minorities than the "Islamic" party, very ironically in deed.

UPDATE: Here's a statement made by the President of Istanbul Boys High School Association, which says School Principal, German Department Head and Deputy Head held a meeting on 19 December 2016, and decided to inform the German press that German teachers are not banned or restricted from talking about or celebrating Christmas, and the school choir was going to perform at the German Consulate as usual, and only students were not allowed to have rehearsals during school hours, which was the case last year as well. 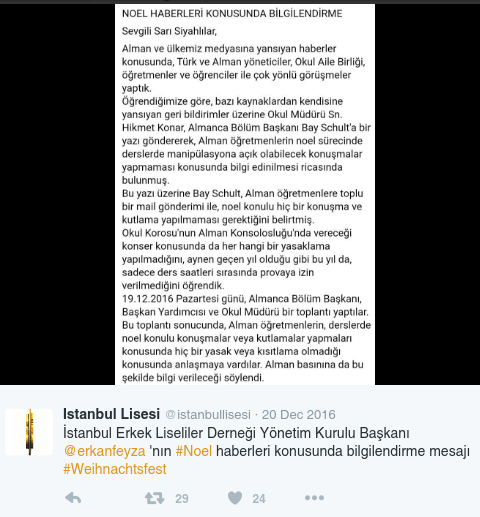 The short answer is that Turkey is not a secular country de facto, even if it is de jure. It cannot be with that big muslim majority and with state involved in religious matters (islamic) at nearly all levels. Moreover, there always was a strong Islamist movement in Turkey and with AKP rule it's growing stronger.

Officials denied the fact (as reported by multiple outlets), but the article linked also mentions this:

However, [officials] said that German teacher have recently been "talking about Christmas and Christianity in a way that was not foreseen by the curriculum."

And let's not forget this:

So question is: if there was no ban, where the news came from? There is no official explanation beyond denial, but it's not at all suprising - teaching Christianity according to Bible in Turkey is illegal without state permit to do so. Why explain the obvious?

But. If we - for example - take into account popular movement to re-open Hagia Sophia mosque (and actual prayers have been already conducted), as well as closing Christian Schools along Syrian Borders, selective closing of places of worship (only churches), seizure of church poperty by the state, ban on teachnig for the Bible, arrests and deportation of foreign pastors and preachers (quite often under "terrorism-related charges") and most recent shooting at Christmas celebrations, the story rings true and is nothing at all surprising.

I will link to most of the examples mentioned above for references later, if there will be a requirement.

Not the answer you're looking for? Browse other questions tagged turkey education .

33
Why are there "bad school districts" and "good school districts" in the US, assuming that the government works hard to increase education standards?
11
Why would Russia supply a NATO country with S400 Missiles batteries?
9
Are there political reasons why Turkey would want to catch Saudi Arabian agents committing a crime?
23
Why would a planned Turkish invasion of Syria motivate US troops' withdrawal?
2
Why is/was the National Liberal Party of Romania opposed to Catholic & Hungarian school when they support a German-minority president?
8
Why does the city of San Francisco have to sue its school board to get schools reopened?