What alternatives to a two-state solution have members of the Israeli Right proposed?

Liberal political blogger Josh Marshall just wrote a blog post discussing the recent U.N. resolution condemning Israeli settlements, but he starts off by discussing the viability of long-term solutions to the Israel-Palestine problem:

There is no longterm solution to the conflict other than some form of partition of the land. This is dictated by an iron grip of demography and ideology. You can either have partition, a binational state or a state in which Jews and a portion of the Arab population (those who are currently citizens of Israel) have political rights and the majority of Arabs (those who now live in the territories) do not. You can call that last option anything you want. But the countries of the world will never and should never accept it. The binational option would be the end of Zionism and either a politically unstable and unworkable state or a slow motion and perhaps fast motion bloodbath. The least bad option for everyone is partition (indeed, it needn't be a bad option at all with creativity and good will, but both are close to non-existent).

This is obvious. The alternative ideas one hears from the Zionist right are either ugly or fantastical. From a Israeli and Zionist perspective, whether the Palestinians are nice or pragmatic or want peace or don't is basically beside the point. The trajectory is the same regardless. These questions affect timing and process, not end result.

My question is, what are these "alternative ideas" that Marshall is alluding to? Among members of the Israeli Right who do not support a two-state solution, what alternatives have they proposed?

I think there are some on the Israeli Left who support a one-state solution dissolving Israel's identity as a Jewish state and making all Palestinians into Israeli citizens. But that doesn't strike me as something that anyone on the Israeli Right would support.

First of all, the main option the question is ignoring is that most opponents of the "standard" Arab-imposed 2-state solution idea (return to 1967 lines) are actually in favor of 2-state solution, just in forms different than what Arab states want.

Now, as to complete alternatives to two-state solution:

Page 17 of the report lists a summary of main ones (I'm just listing the options themselves and not the workshop's analysis of them):

First, I want to point out that the occuapation is 50 years old. It has worked fairly well for Israel and its goals regarding regional security and territorial expansion have largely been achieved.

It might seem strange to say that a day after four Israeli soldiers were killed by an Arab Israeli ramming them with a truck. But look at the numbers, terrorism has waned over the years and the number of successful attacks are record low.

At the same time, Israel has improved its image in the Arab world. One example is the Arab Peace Initiative, presented by the Saudi king in 2002, which offered Israel peace and recognition in exchange for withdrawal from the territories captured in 1967. Such an initiative would have been unthinkable in the 1980's.

For Israel, things are moving in the right direction albeit slowly. The state knows there is a cost to the occupation, but so far it has been willing to shoulder it. Therefore it seems most likely that the state will uphold the status quo but advance its interest in key areas such as strengthening its grip on East Jerusalem.

@user4012's answer is a good summary of the most popular solutions to the Palestine question. So I will just describe the right-wing ones. Remember that these aren't (currently) seriously considered by the Israeli establishment.

Education minister, Naftali Bennett wants to annex Area C of the West Bank. It corresponds to the white area of this map: 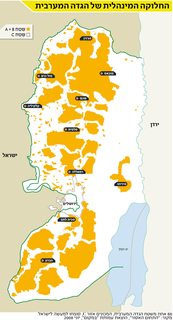 He is the leader of the right-wing Jewish Home party which currently holds 8 of 120 seats in the Knesset (Israeli parliament).

I think Marhall thinks this solution is "ugly or fantastical" because constructing a state out of the yellow areas of the West Bank would be impossible. The Palestinians in those areas would be living in a territorial void without political rights.

Likely the "ugly or fantastical" idea Marshall has in mind. The idea is described in A History of the Concept of "Transfer" in Zionism by Israel Shahak:

Since early summer 1987, a movement has been growing in Israeli-Jewish society which supports the idea of expelling all Palestinians from the West Bank and Gaza Strip to neighboring Arab countries or, preferably, beyond. The present plans resemble older Zionist attempts or plans for the expulsion of Palestinians, referred to euphemistically as 'transfer' plans. It must be emphasized that the existence of a very strong minority that advocates this idea, combined with the support or at very least the lack of opposition from influential personalities, makes this idea of 'transfer' a potentially very dangerous one. Indeed, a significant minority of Israeli Jews takes this option seriously. In general, opposition inside Israel to transfer includes people from across the political spectrum, but it is much stronger among the secular than among the religious.

This idea was advocated by Meir Kahane of the right-wing Kach party which was banned in 1994.

A more recent party supporting "transfer" is Benny Elon of the Molodet party. His ideas, formulated in the Elon Plan is a mix of forced and voluntary expulsion of Palestinians from the West Bank. He notes that about half of all Palestinians would be willing to emigrate given the right incentives:

"It can be examined whether it is not more humane, still, to give a million families 100,000 dollars each, and have them rebuild their lives, in the same way that my father, a refugee from Dusseldorf, and the refugees from Morocco and other places did when they built this country…"

An even more recent example is Baruch Marzel of the now defunct Jewish National Front.

It's important to note that these ideas are only propagated by the right-wing of the right-wing. Those who consider Benjamin Netanyahu a leftist.

I recall hearing talk of a 3-state solution during the George W Bush administration: Israel as-now, West Bank as a PLO-run state and Gaza as a Hamas-run state.

For now though, I think the political actors are happy with the status quo so expect greater amount of settlements into West Bank, violence in new settlements from Palestinians in reaction to encroachment and then wall extension and construction as Israel's booming economy gobbles up more land whereas the hobbled Palestinian economy continues to underperform.

Even otherwise right now in 2017 many even pro-Palestinians feel that the two state solution, advocated tirelessly by mediocre politicians who lack historical vision, is therefore unrealistic, unworkable and dangerous. Unrealistic and unworkable because one can’t unscramble an egg, and dangerous because genuine grievances can’t be suppressed permanently by shortsighted political decisions.

Moreover, Jews, Muslims, Christians and others would be perfectly free to practice their religious beliefs and, unlike the current situation, would enjoy unfettered access to their respective holy places. And all would be treated equally before the law as citizens.

Furthermore, every citizen would be free to live wherever he or she likes in accordance with the law. For example, a Jew would be free to settle anywhere in Israel/Palestine. A Palestinian would be accorded the same right.

Nonetheless, the two communities must realize by now that that they have to reform and amend their old, anachronistic ways and especially their views of each other.

Palestinians will have to discard, once and for all, their dreams of cleansing Palestine of Ashkenazi and other Jews who arrived in the country following WWII.

Likewise, Jews must come to terms with the fact that Palestinians have at least an equal right to this land of Israel/Palestine.

This vision of one-state for all, where Jews and Palestinians live equally and peacefully in a unitary, democratic, civil state is not too idealistic to be practical. It happened in South Africa; and it is practiced in many countries all over the globe.

23
What is Israel's long-term plan in the West Bank?

0
What is USA's position on the Israeli-Palestinian conflict?
28
What is the historical basis of Israeli and Palestinian claims to the land that is now under Israeli control?
1
What are the viewpoints and policy positions of the Israeli right wing?
7
Does the UN Security Council votes 14-0 to condemn Israeli settlement have binding consequences for Israel?
4
Does moving the US embassy to Jerusalem make a three-state solution more likely?
5
What was the gender and racial breakdown of voting on the Israeli Statehood bill?
21
What is the current Palestinian position on the right of return?
15
What is the EU official position on Israeli settlements beyond the 1967 border?