Can communism be effective in a post scarcity economy?

Recently following the discussion by politicians in US elections of "getting jobs back", it seemed clear to me that this phase of losing jobs can't be stopped or even slowed: it's the natural and unavoidable effect of automation. This lead me to discuss Universal Basic Income, a potential solution to a future where so much is automated that there aren't enough jobs for even a small fraction of the population.

In this discussion topic, I've found that the resulting system that seems necessary is very similar to communism.

"A communist economic system would be characterized by advanced productive technology that enables material abundance, which in turn would enable the free distribution of most or all economic output and the holding of the means of producing this output in common."

That looks identical to a post scarcity UBI system to me.

So my question is this: is communism not an inherently flawed governing system, but rather one that is failed due to its inability to work outside of a post scarcity economy, and misused due to its ability to entice citizens with false promises of equality?

In other words, can communism be effective in a post scarcity economy? Why or why not?

To clarify, since there seems to be the potential for confusion here: I'm pointing out that perhaps communism works only as a solution to the situation where everything is already automated and people don't need to work (and can't - 90% of jobs are automated). Either you divide the wealth in a manner not based on work or your population starves at that point (because there's simply no demand for work).

I'm turning that "perhaps" into a question to learn about whether that could be accurate or not.

Anyway, the differences between a communist and a capitalist society become rather meaningless when talking about a post-scarcity society. Resources aren't scarce. If you are a poor person in a post-scarcity society, just find a charitable rich person and ask for your own product maker. They use their product maker to give you one. After all, there is no scarcity, so it doesn't cost anything to be charitable. Now you can make one for all your friends.

I'm just using "product maker" as the term for the thing where you can get stuff. After all, stuff isn't scarce. So you should be able to just get stuff from somewhere. I'm sort of thinking about a robot that can build a perfect copy of itself. Or it can build a spaceship. Or anything else.

We aren't that close

While there are a lot of people anticipating a no-labor future, we still need people to do jobs. Take the United States for example. In the US, more than half of adults are working. In fact, that statistic was 62.7 in November of 2016.

Currently robots are specialty machines. A robot can work on an assembly line or vacuum your rug. But neither of those could go pick up your dry cleaning or babysit your kid. That's expanding, we may have self-driving taxis and trucks within the next ten to twenty years. But the lawn mowing robot still won't be able to trim your bushes. In the meantime, a human landscaper can do both things with different tools.

Not everything would be post-scarcity

There are many resources that are not going to be post-scarcity. For example, land in urban centers would remain scarce. We don't have a large scale non-polluting energy source on Earth. Maybe people could move to space stations for more of a post-scarcity experience. Need more power? Just build some more solar panels. Or add a new module for more space.

This gets confused a lot because of what people in capitalist societies call communism. Communism is not something like a universal basic income. The most basic component of communism is central planning. Central planning is a horribly inefficient way of running an economy. It might take post-scarcity to make it feasible on large scale. But as I said previously, why bother at that point? You don't need government allocation of non-scarce goods.

A better name for a society that uses tax revenue to fund a universal basic income is socialist. For example, Finland seems to be planning to run an experiment soon. Socialist economies tend to also be free market economies. Socialist level taxation is built on top of a free market and either gives people cash benefits or buys goods on the free market. Possibly with some government services added, e.g. healthcare, law enforcement, postal service, etc.

I'm not seeing any of the other answers address anything outside of the western anti-communist understanding of what communists advocate so I'm going to give this an answer even though others have.

I'm going to start off by outlining what I am referring to when I say "communism" because there is not a concrete understanding of what communism is in most countries. Just in case someone who is under the impression that Obama or Bernie Sanders are dangerous Marxists stumbles across this answer, I'd like to make some things clear.

Firstly, I must point out that communism is not something which can be put into place immediately and tested. Communism is not a set of policy ideas or a dogma.

Communists want to usher in a stateless society where the means of production are commonly owned and production is for use by the community rather than sale for the capitalist boss.

While I do not want to assert that all communism is Marxist, I will be talking about Marxism because I deem it to be the most developed communist theory.

"Marxism is the method of dialectical materialism, and the application of this method to social life. Marxism is not simply a collection of pre-existing conclusions or "things Karl Marx said", but a way of understanding and effecting social change based on Karl Marx's method."-communism101

It is important to understand that class is not qualified by the amount of money controlled by an individual, rather how they relate to productive forces. If one sells their labour (when they work in a factory for instance) than they are a proletarian, if one sells products or services for their living they are a member of the bourgeois class.

Communists want to end the exploitative relationship between the workers and the people who own the means of productions (the relationship between the proletariat and the bourgeoisie). When a worker creates a product they are not paid the market value for the product they create, they are paid a wage and the capitalist who owns the enterprise they work in makes the surplus value. Meaning; the capitalist makes money off of what the worker produces.

These are just the basics, they are well explained in 25 short questions in "The Principles of Communism" by Freidrich Engels.

Some Marxists explain we are already living post-scarcity, although I imagine the usage of the words differ from yours. Marxists see the elimination of artificial scarcity which plagues modern markets as an important benefit of the transition to socialism and eventually communism.

Can communism work in a post scarcity economy? We can't know for sure. However I can point you to some resources which might interest you.

Many people categorise the economy in the Star Trek TV show to be tinkering with the concept of post scarcity socialism, because human labour is substituted with energy and that ushers in a production for use and the abolition of the worker boss relationship.

Sorry if my answer is not as conclusive as you like, but it is not very answerable as none of us will know what the future holds.

A similar question was also asked on /r/futurology if anyone is interested in that. 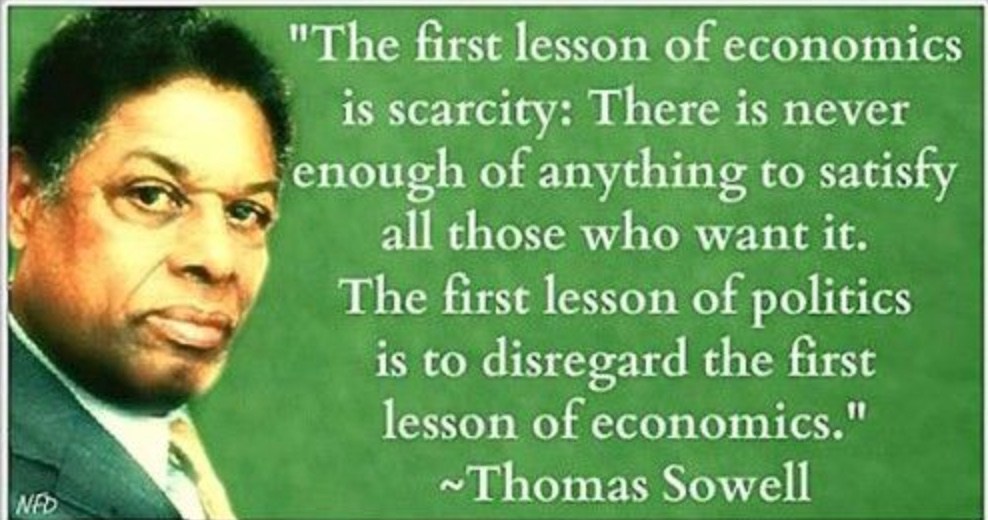 There is no objective, empirical or historical case that can be made that Communism is better, more fair, or has any preferable outcomes over most Western democracies, and that is because the political philosophical case for Marxism is inherently flawed. Marxism's lack of understanding of human nature, it's morally flawed call for violence, it's debasement of the individual to be subservient to the Party and to the State, the lack of curtailment on the state's power, and a host of other issues caused it to be a political failure as precedent to it's economic failures, which are legion. Even in your case of allowing a "Garden of Eden" scenario where scarcity doesn't exist, the political and moral failings of Marxism would pervade the social and political organization of society to rend it apart.

Communism literally has none of those safe guards.

Two final notes: one the quote from Wiki is laughable if it weren't so sad. To the contrary, never in the history of mankind has there been a system of organization that destroyed wealth and industry as much as Communism. From Venezuela to Sweden the introduction of Communism or Socialism has one consistent effect and that is the destruction of wealth.

Second final note: if you are overly concerned about automation and think it desirous to curtail it, Communism may be your ticket because it retards technology widely available. For example, about 15-20 years ago Cuba had to reintroduce the ox and plow--their poverty no longer allowed them the luxury of purchasing and maintaining tractors (although there are a couple of US business men trying to change that).

Communism would not be the answer to an automated society, rather, it would be the cause. Dehumanization would force a jobless world. Communism will never work if those under that ideaology have a consciousness and a will. It totally depends on the collective vs individual ethics of the given society. As far as humans have been, are, and ever will be, Communism will not be a solution.

Not the answer you're looking for? Browse other questions tagged political-theory ideology communism .

10
How is the Venus Project resource-based economy different than communism?
6
In Communism, what happens to property rights?
5
How can communism be totalitarian?
6
What are the modern arguments for Communism?
1
Full Communism & rare items/collectibles
1
Is Chinese Communism with market economy based on any Marxist theory?
17
Is the Chinese system becoming more Fascist than Capitalist?
48
Is Communism intrinsically authoritarian?
1
Why did communism not succeed in the USA?