Why do the Dutch Euro coins have a religious inscription on their edge? 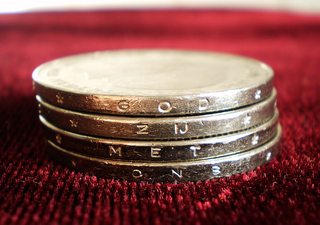 The Dutch inscription is "God zij met ons", which means "(may) God be with us". It's the only country in the EMU that uses a religious inscription — not even the Vatican does that.

Even though The Netherlands do not have as strong an anti-establishment clause as the USA have, they do not have a state religion.

Why then do The Netherlands have a religious inscription on their euro coins?

What were the forces in play that made a nominally secular country repeat the religious slogan from the guilder on their euro?

This phrase has been on the edge of the Dutch Guilder since 1816. Aside from religious reasons, a practical reason it was added was to prevent forgery and clipping.

When the Euro came 'round many people thought it might be appropriate to use a more secular phrase, and many op-eds and arguments were written. But especially the SGP was fiercely against this and enthusiastically campaigned to keep it.

The SGP is a fundamentalist Protestant party. They want to establish a theocracy and outlaw "false" religions. Not paraphrasing here; this is literally in their party program (in this answer I went in to some depth as to why they're still a part of modern Dutch politics).

There was no vote for the design, the minister of finance (Gerrit Zalm) chose it. Why exactly did he choose it? I can't find any clear statements from him about this. Some plausible reasons:

To explain the mindset perhaps another example of polderen might help, for example how the Netherlands dealt with the matter of conciousness objections of civil servants against marrying same-sex couples.

Last year in the U.S. Kim Davis stirred up a lot of trouble about this – it was an affair full of conflict, court orders, protests, and all sorts of consternation.

In the Netherlands – where same-sex marriage has been legal since 2001 – we've also had to deal with this situation. But the political approach to it has been very different. Sure, there have been heated and passionate debates – as there should be – but in the end a compromise was reached where civil servants hired before the compromise took effect were allowed to refuse to marry same-sex couples (municipalities still have the obligation to guarantee that same-sex marriages can actually marry though).

9
Why is the Reformed Political Party Youth the largest political youth organisation in The Netherlands?

15
Could the US legally adopt Indonesia's 'religion in schools' setup?
8
Which religious groups have made use of the religious exemption under Obamacare?
11
Why do some parties but not others have logos in the new Dutch ballot paper (stembiljet)?
3
How does the Dutch system for preferential votes (*voorkeursstemmen*) work?
8
What happens when a Dutch party wins more seats than they have candidates listed for?
8
Why wasn't Greece kicked out of the Euro once it was clear that they falsified their statistics to join in the first place?
3
Why does the Dutch PVV oppose spending on innovation?
3
Why did the Dutch government put XTC/MDMA as a hard drug?
5
Do any US politicians publicly state they support removing religious symbolism from things like coins?
8
What did the Dutch law commission find about their own military participation in Iraq (2003-2005)?