Why is there so much talk about this picture of crowd size at the inauguration?

Seems this has become the new issue of the new administration. Even Sean Spicer spent time during media briefing to talk about it and even went so far as to say

“This was the largest audience to ever witness an inauguration, period"

This is the picture in question: 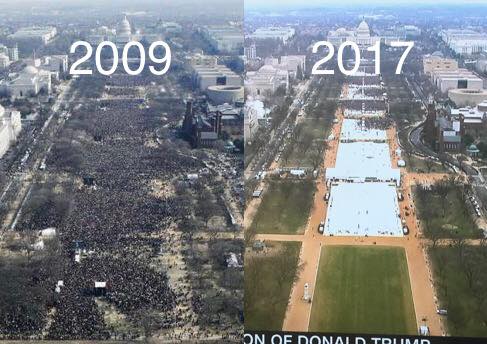 were the two photos taken when Obama and Trump were giving their speeches?

The pictures by themselves are not much of an issue; there are obviously fewer people in one than in other but there is not much more that can be concluded about it1.

The issue is that in his habitual style, Trump and his aides could not stand any information that did not suit them, and engaged in claims that his inauguration had more attendance than Obama's (including attacks on the press that reported otherwise). Even when other data (number of metro rides that day) debunked that claim, they pressed their own claim, to the point of talking about alternative facts.2

Now, the issue of how many people there were is minor in itself, but the way Trump administration has reacted is worrisome: deny the data they do not want, make a major issue of a point without importance, attack anyone who produces information they do not like, and invent "alternative facts"3.

It is not the only incident of this type Trump has protagonized4, so it has lead to doubts about his personality. If this is how he reacts to bad data about the public attendance to his inauguration... what should the public expect from him if economic, intelligence, etc. data does not paint the picture that Trumps wants to see? This is the whole point of the debate.

1For example, maybe more people prefered to get out for a weekend trip than to attend Trump's inauguration on a Friday, or it was colder, or whatever. If you want more details about how many people were at each inauguration, this question in skeptics addresses the issue.

2BTW, the video covers the whole issue pretty well -although with an humorous spin-, it is worth seeing it full.

3Alternative facts would be OK if Trump were POTUS in an alternative reality, since he is not it is desirable that he learns to use actual facts.

4Up to claiming fraud in the elections that nobody disputes he won, which is AFAIK a first in Western history.

Attendance at the inauguration has become a widely reported story because it's used by folks in the media to illustrate excitement behind a candidate. Whether rightly, or wrongly, it's become a point of comparison that managed to be a major point in President Trump's first press conference.

Politifact has an excellent analysis on the claims made in the press conference that provide data-backed analysis, rather than opinion or spin.

9
How does early voting work, and what are the pros and cons?
5
Why would Palestinians be offended if the US deliberations to move its embassy from Tel Aviv to Jerusalem proceed?
18
At Trump's inauguration, who is this dapper-looking man and why is he important?
5
Is Trump’s barring of select media outlets from White House press conferences a violation of the First Amendment?
4
Did the Obama administration make any statements on lethal aid for Ukraine?
3
What rate of decline in COVID cases is suggested by presidential guidelines?