Does standard of living correlate with higher education?

This question aims at the correlation between a societies standard of living and standard of formal education.

For example, over the past century, America has had the fortune of being a place with a high standard of living, relative to most of the world.

However, it is hard to ignore, that when foreigners come to study and work in American society, they bring their cultural standard of higher marks in course work or higher ranks in the work world.

Example: the "Asian F" is commonly known in American schools and colleges as an Asian student receiving the letter grade of a B in a certain course.

However, this grade among Americans had always been considered above average and continues to secure a higher standard of life, while the foreigners with the higher cultural mark standards come from a country with a lower standard of living.

So is there a correlation between Higher Education levels and Standard of Living?

Yes, Standard of Living correlates with higher education, because the latter is included in the measurement of the former.

Standard of living refers to the level of wealth, comfort, material goods and necessities available to a certain socioeconomic class in a certain geographic area. The standard of living includes factors such as income, quality and availability of employment, class disparity, poverty rate, quality and affordability of housing, hours of work required to purchase necessities, gross domestic product, inflation rate, number of vacation days per year, affordable (or free) access to quality healthcare, quality and availability of education, life expectancy, incidence of disease, cost of goods and services, infrastructure, national economic growth, economic and political stability, political and religious freedom, environmental quality, climate and safety. The standard of living is closely related to quality of life.

There are several measures of Standard of Living. One is created for evaluating quality of life in OECD countries. You can run your own comparisons on the data here, and change the weight placed on each variable. You will notice little fluctuation, especially with those nations that have low education scores. 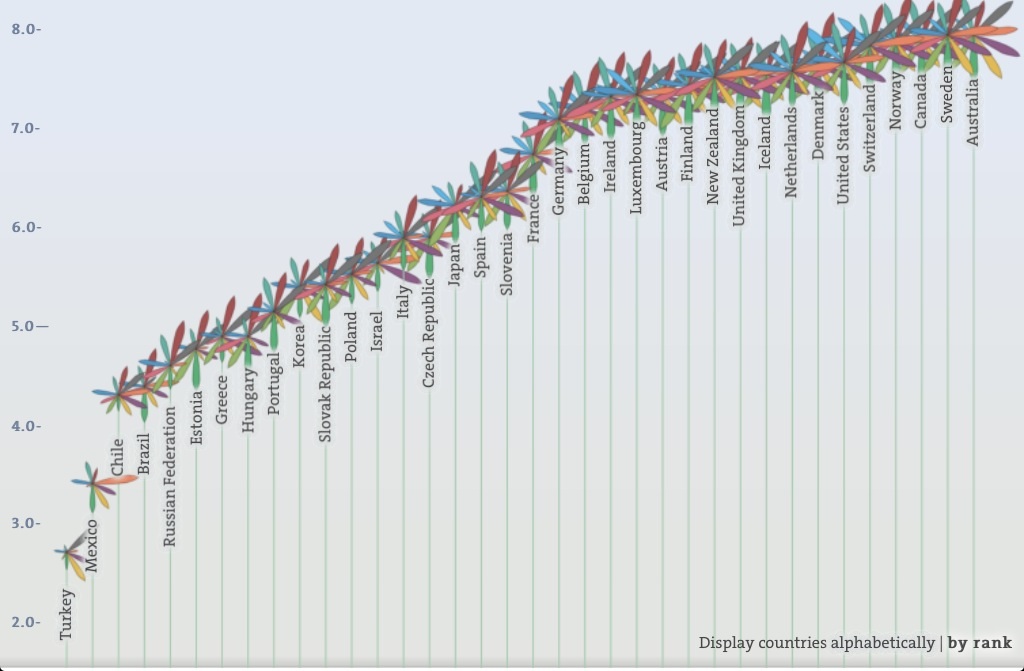 Another standard is the Human Development Index. You can run your own charts on their data here. You will find a high degree of correlation between HDI: Education Index and **HDI: Human Development Index (HDI) value. Here is a plot of HDI: Education Index versus HDI value. You will note the positive slope of the line, and the fact that the majority of points track fairly close to a line through the center of the points. 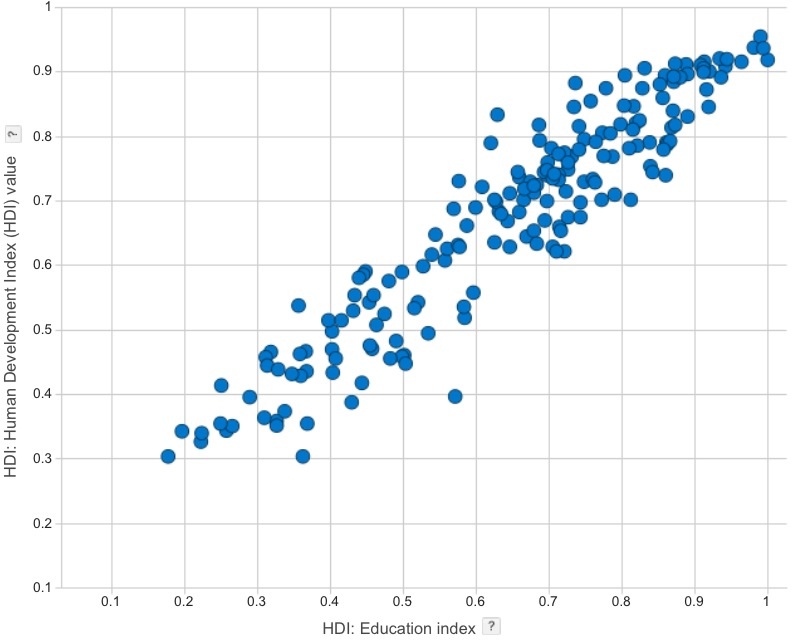 Standard of living correlates quite well with years of schooling, including time spent in "higher education".

A simple definition of standard of living is GDP per capita. GapMinder.org lets you make a scatter plot comparing just about any two variables about countries, and you can even press a "play" button to see how that relationship evolved over time. For instance, here is a scatter plot comparing GDP/capita with "years of schooling, women age 24-35 years old". As you can see, it has a positive trend. (The same chart for men also has a positive trend.) Richer nations have more people spending more time in school than do poorer nations.

(Teasing out cause and effect would be a lot harder - it's quite likely the causality is reversed. That is to say: people in richer countries can afford the luxury of being able to spend more time in school)

Studies have shown that higher education is related to higher earnings WITHIN a given country. That is true even in the United States, where a high school graduate can expect to earn $1.3 million over a lifetime, a college graduate $2.3 million, and a master's degree holder, $2.7 million. http://www.usnews.com/education/best-colleges/articles/2011/08/05/how-higher-education-affects-lifetime-salary

This is not as true BETWEEN countries. For instance, the U.S. has 20% of the world's GDP with only 5% of the population, or four times more per capita income than global standards. (Just after World War II, the ratio was more like 10 to 1). So if a global high schooler makes X, and a college graduate makes twice as much, or 2X, the U.S. high school graduate might make 4X, or twice as much as the foreign collegian (while the U.S. collegian makes 8x). If you do not control for country, the relationship breaks down.

The Asians attending American schools get higher grades on average than American students. But they also have lower standards of living on average, becasue of the country they came from. The way for them to overcome this is to work for an American company (at American wages) and/or take U.S. citizenship.

Warren Buffett once confessed that a large part of his "secret" for getting rich was to be born in the top 2% of the global population. That is the top American 5%, plus the fact that he was male (top 2.5%), and white (top 2.0%). So education is only one variable correlated with lifetime earnings with "country" perhaps being more important. Put another way, one may be better off being the average janitor in America than the average PhD in Zaire.

Not the answer you're looking for? Browse other questions tagged united-states economy policy education society .

3
Has the US Government acknowledged the slight decline of the secondary education?

14
In the U.S., are people with more education more likely to vote liberal?
12
Are Minimum Wage laws correlated with higher poverty levels?
4
What effect does early education have on graduation rate, pregnancy, and violent crime?
22
Does the Secretary of Education have to support public education?
44
Why do some European countries provide free higher education to foreigners?
6
How does Islamic single-sex education, ruled unlawful, differ from other single-sex education in the UK?
2
Does antisemitism in the US correlate with (non-)religiosity?
23
Why does the United States have some of the best universities and tertiary education in the world yet only ranks average in K-12 education?