Why are almost all of the United Nations headquarters located in Europe or America?

Why are almost all of the United Nations headquarters located in Europe or America?

Why aren't there any headquarter of UN department in Asia or Latin America or Africa?

Six are in Switzerland, presumably due to its reputation for neutrality. Four of them seem to have replaced organizations that predated the United Nations.

Three are in Italy, all related to food and agriculture. Two are newer, so they might have split off from the first.

Two are in Austria. Note that at the time that they were established, Austria was a neutral country that bordered the eastern bloc countries dominated by the Soviet Union. The first came shortly after the Soviets and the western allies withdrew from their postwar occupation in 1955.

Two are in the United States of America, both related to money and banking. The US was the largest economy and expected to fund the rebuilding of Europe and Japan. Giving it control of the banking organizations probably made sense at that point.

One in the United Kingdom, related to maritime operations. The UK has a long history as a noted naval power with lots of economic activity related to shipping.

One in France, related to culture, science, and education.

One in Canada, related to aviation.

One in Spain, related to tourism.

Note that most of them were established shortly after World War II, so they were likely intended to draw the European countries closer together. Putting them in Europe made sense at that time, particularly as Switzerland had held the immediate predecessor to the UN: the League of Nations.

Looking at the League of Nations, most of Africa was considered colonies of other powers. Most of Asia was the Soviet Union and China.

In general, Europe and North America provide most of the funding for the United Nations. It would be unsurprising if they wanted to keep track of their investments. Similarly, note that most US agencies are located close to Washington, DC even though their clients are elsewhere. For example, the Interior department oversees national parks, mostly land in the west. DC is in the urbanized east, while a great deal of rural land is more centrally located.

Inertia keeps organizations where they were founded, even as circumstances change later. Washington, DC is reasonably located in the middle of the original thirteen colonies, but the center of the US is now in Missouri (closer to St. Louis or Kansas City). Yet they've never moved the capital.

There is an old website, but with updated information, about the United Nations in Russia. One section specifies about the UN Information Centre in Moscow (UNIC).

Established in 1948, the UN Information Centre in Moscow is the oldest UN office in the country. It is in a way a compact UN "information agency". It is also a repository of knowledge, global best practices and standards in a wide range of areas – from environmental protection to outer space – being at the same time a sort of a local UN public relations service.

[EDIT] (after question edit and comments)

I think that HQs are located only within some countries because of the following:

Why are all United nations headquarters in Europe or America?

The UN is primarily a west-led and west-funded organization. So it makes sense that its employees are primarily citizens from the western countries, and such.

That's pretty much true for most of the world institutions. 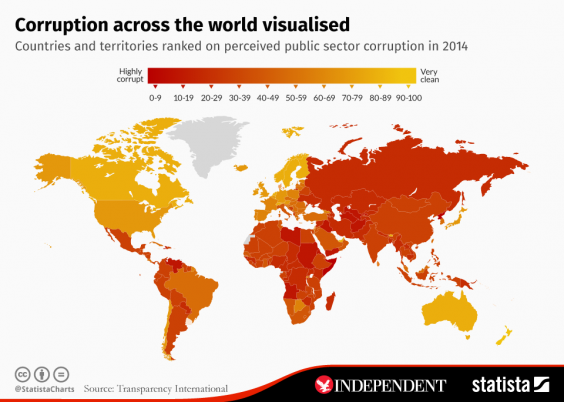 I'm pretty sure this pic is all the explanation you need.

18
Does the US often deny visas to UN diplomats?
5
Has Japan's “Special Secrecy Law” been condemned by the United Nations?
17
What is the legal background for Russia's seat as a Permanent Member of UNSC?
4
What is the procedure of changing official English country name by United Nations?
9
Why does Russia seem to praise USSR personalities almost three decades after the fall of communism?
60
Has a world leader been laughed at while addressing the UN General Assembly before?
51
Why did Israel vote against lifting the American embargo on Cuba?
0
Why is Esperanto recognized by the United Nations?