What are the advantages of the French two-round voting system against a one round alternative?

In regards to the French Presidential election of 2017, what are the advantages of the French two-round voting system against a one round alternative?

If two-round is better than one round, what about three rounds?

One can imagine several main options:

In this system the candidate with the most votes in the first round wins. This means that if there are more than two candidates running, a third party candidate can "spoil" the vote for the viable candidate most similar in ideology to him by splitting the vote of people who share their ideology, making the winner the candidate whose ideology actually has less support in the electorate than an alternative.

The virtue of this system is that it is very simple.

In this system, if one candidate gets a majority of the vote in the first round, he wins, but if not, there is a runoff of the top two candidates.

This first prevents the spoiler effect, and second, allows members of the public to have time to give more attention to the two candidates who could win, particularly if they voted for a third party candidate the first time around. This reflects the fact that people aren't always good at making hypothetical decisions and don't invest as much effort into considering second and subsequent choices as their first choice.

In instant runoff voting, voters go to the polls just once and list not only their first choice but the second or even third or fourth choices.

The candidate with the least first choice voters is eliminated and that candidate's votes go to second choice candidates who are still in the running, and so on, until someone has a majority of the vote.

This eliminates the costs of a second round of voting, in exchange for making the initial ballot more complex and denying voters a chance of additional deliberation if their first choice candidate doesn't win.

In this system, everyone votes for their choice of a candidate and the top two candidates enter a second round, even if one candidate gets a majority in the first round.

This is similar to majority voting, but allows additional deliberation about the two most viable candidates even if one of them wins a majority in the first round, on the ground that, for example, everyone may be familiar with an incumbent, but not with a number of challengers, and that once the number of challengers is narrowed to one and people have a chance to examine the challenger more carefully, they may change their minds.

In this system, the main ideological divide is already known and political parties prevent spoilers that plague. But, the ideological landscape is predetermined and this tends to lead to more extreme partisanship than an open primary, leaving fewer politicians holding middle ground.

It also strengthens political parties in general, providing an intermediary between the state and the voters which can build pre-election coalitions which are important to developing a consensus among the people in support of a coherent set of policies.

You could have three rounds until a majority is achieved and there is virtue in not necessarily only picking the top two finishers in a majority vote system if the runners up are close to each other. But, it could cost more money and at some point if the people eliminated in the first round aren't sufficient to give remaining candidates a majority, you'd want some way to end it.

Still, having a second round of the top two plus any other candidate with say 90% of the vote of the runner up, if no one receives a majority and making a third round consist of only the top two candidates in the second round, isn't necessarily a bad rule if it is a close race between ideologically similar runners up.

If the Republican primary in the U.S. in 2016 had had something like a three round system, someone other than Trump probably would have been the GOP nominee because the competition among multiple "establishment" candidates would have thinned out.

Regarding the political benefits of having the ballotage system (two rounds) is that the candidate(s) is/are going to win with a absolute majority of vote. When you use this system, it only allow you (the voter) to choose between two options while having only one alternative is not going to be helpful when you build a consensus, theoretically speaking.

Say you have 5 candidates and the most voted have 30 and 37 percent, neither have the majority needed, so going to a ballotage you're receiving the absolute majority. The disadvantage of using this system (two rounds) is the fatigue (apathy) that is going to suffer the voter if the election is not playing something that he/she is not interested or the voter is sure that the other candidate is going to win.

The three round is going to be empirically impossible to organize it and before even speak about the political implications, you need to consider the cost, the logistic of what an election implicates. In France, with two round system, in 2012 each voter costed almost EUR 2 average per candidate. 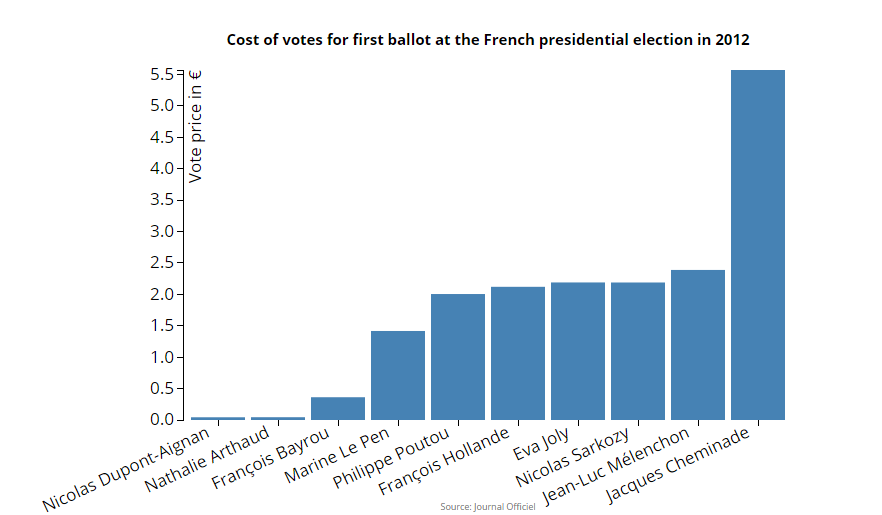 So, the political system itself is going to be expensive if you make a three round system.

5
What are the reasons against plural voting?
9
Consequences of hypothetical “cast one vote for OR against” system?
2
In two-round system, how common is that the two remaining candidates have more votes than all candidates (including both of them) on first round?
39
What arguments are there against ranked-choice voting?
10
Why have markets reacted well to the first round of the French presidential election?
6
Why was the voter turnout so low in the second round of French elections?
5
What happens if a candidate dies after the first round of French presidential elections?