Did Hezbollah ever have a flag with a nuclear mushroom cloud on it?

In this video Salman Rushdie claims Hezbollah and Hamas was using mushroom clouds as their flag (1:31). Christopher Hitchens claims the Hezbollah's party symbol and flag was a mushroom cloud in Beirut (1:45). Is any of this true?

Hezbollah has used a variety of symbols, but there is no evidence that they have officially adopted any that relates to nuclear weapons. Christopher Hitchens does indeed use the words "party symbol" in the video, but that's probably a slip of the tongue. What he had in mind was a random banner in one rally (Dahiyeh, Beirut, 2009):

A huge poster of a nuclear mushroom cloud surmounts the scene, with the inscription oh zionists, if you want this type of war then so be it! During the warm-up, an onstage Muslim Milli Vanilli orchestra and choir lip-synchs badly to a repetitive, robotic music video that shows lurid scenes of martyrdom and warfare.

Source: The Swastika and the Cedar, Christopher Hitchens, Vanity Fair.

James Kirchick also attended the event, and gives a similar description of the banner:

A giant banner on the back wall bore the words, “Oh Zionists, Oh Zionists, if you want this type of war, SO BE IT,” surrounding Arabic calligraphy bearing the same message in the form of a mushroom cloud.

Hezbollah's use of aggressive, chest pounding symbolism is no secret, but calling the banner "official party symbol" is a stretch. It never appeared in any official Hezbollah documentation and it hasn't made any notable reappearance in any form since that event.

Mr. Rushdie's claim is far too vague to investigate.

A flag is a symbol of a people's hopes and dreams.

Neither Hamas nor Hezbollah depict a nuclear cloud on their flags and both are elected to govern in their own countries. But consider the subtext of the question posed by Hitchens: Is the leader of Iran or Hezbollah more dangerous than leaders of the US or Israel? Nassrallah or Clinton, Ali al-Sistani or Netanyahu? Trump? Don't even go there.

In the region only Israel possesses nuclear weapons technology supplied by the USA, France and the UK - themselves all nuclear armed.

While Hitchens has made unfounded allegations against Hezbollah, Australia's Bob Hawke (or Vulture?) actually advised Israeli Prime Minister, Golda Meir, to entertain use of nuclear weapons against Arab people during the 1973 Arab-Israeli war.

In 2006 Hezbollah drove the Israeli army out of Lebanon thus establishing years of relative peace (2006-16) for the people of that country; and this, after 30 years of civil war and Zionist occupation.

Regarding Rushdie's claim against Hamas using mushroom clouds on their flags, it is the apartheid state of Israel that is making Gaza unlivable through bombardment and sanction.

All is not what is alleged on the surface.

This image depicts a plane leaving a mushroom cloud over Clovelly, it does not mean that Australia is dropping nuclear weapons over a beach suburb in Sydney. 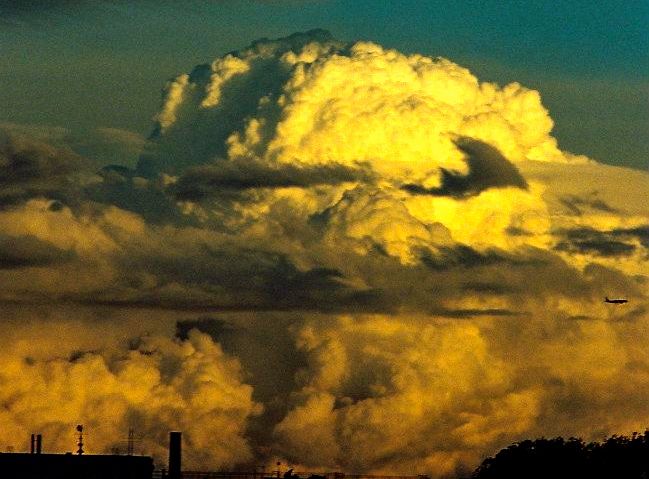 Not the answer you're looking for? Browse other questions tagged nuclear-weapons symbols hezbollah .

1
Which sovereign states currently have nuclear power stations but no nuclear weapons programs?
6
Has a British PM ever given a speech with the EU flag alongside the Union Jack?
38
Why does China have so few nuclear weapons?
2
What is the deal with national birds across European countries?
5
Where do the democratic and republican matched animal logos come from?
41
What's the red, white and blue (with stars) banner that Trump was using on the stage in his election campaign?
4
Decoding certain customized annotations in political signage, do these symbols have any emerging specific connotations?