What are the state-of-the art techniques for crowd size estimations? [closed]

Ask Question
Asked 3 years, 4 months ago
Active 3 years, 1 month ago
Viewed 383 times
6
Closed. This question is off-topic. It is not currently accepting answers.

The recent crowd size debate, (if we can call this a debate), on the inauguration reminded me of something that happens at every demonstration in France. The estimations of the number of demonstrators, according to the police, and according to the organisers, are very different, with a ratio as large as 1 to 10.

Question: What are the different techniques employed to estimate the size of a crowd? Who uses them?

I am not looking for a visually vague answer like a "picture from above". If it is with a picture from above, what do we do with this picture? Are the people counted by hand in a small area and then an extrapolation is made? Is this area representative? Are pictures taken at different moments considered? Is the time the crowd needs to pass a given point considered?

This is hard to generalize, because there are so many different organizations which organize demonstrations and other public gatherings and then report their estimations regarding participations. Also, there are countless police departments in the world, and they all also use different methods.

But a more reliable method to count crowd sizes is the Jacob's Method. In order to use this method, you need:

The method works as follows

Now you can calculate the number of people in each polygon by multiplying the area in m² with the fill-factor and the estimated density. Do that for all polygons, add up the numbers and you should have a quite good estimation.

The proper estimation of the crowd size is an important factor for police and emergency services. For instance, knowing the number of attendees and exits in a closed location is useful for prediction panic in an emergency case (like fire or shooting). It is also important to know the crowd size if you want to know how many police and guards you need to ensure the security of an event.

One of the most known methods of counting is named after its inventor, Herbert Jacobs.

"I would say the most accurate way to estimate the number of people in a large outdoor crowd is to get good aerial imagery, break it into regions of similar density, measure the square footage of each region, apply a reasonable value for the density in each region, and then add the calculated number of people in each region back into a total estimate," said Stephen Doig, a census expert at Arizona State University.
"The only better way would be if the crowd had to buy tickets and go through turnstiles to get in; alas, that rarely is the case," Doig told Life's Little Mysteries. — (source)

In this article on NBC News, Stephen Doig says:

AFAIR (unsourced), the police of Ukraine uses a similar methodology of splitting the crowd into areas of different densities and then calculating the number of areas of each density. It also has internal instructions that refer different crowd density of ½ to 6 people per square meter. This technique was used to calculate the number of people during the Revolution of Dignity of 2014. 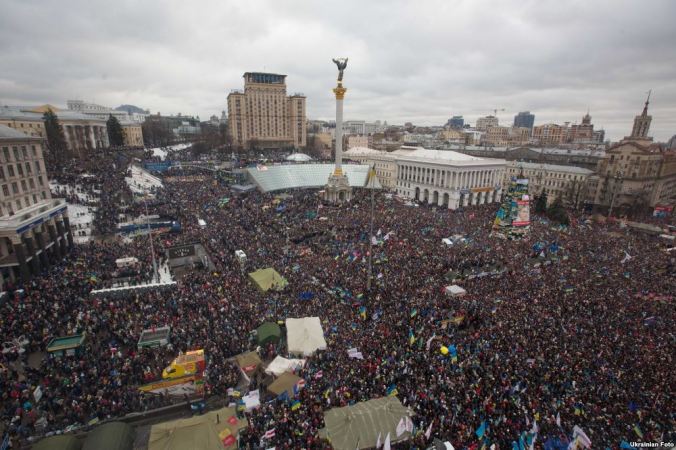 3
What are the reasons for such differences in the size of shadow economy?
21
What were the military men doing behind Donald Trump when he began his speech?
13
At Trump's inauguration, who was the man in the wheelchair and why is he important?
10
What were the goals of the woman's march during Trump's inauguration?
53
Why is there so much talk about this picture of crowd size at the inauguration?
6
Are the “security concerns” for the State of the Union legitimate?
8
How long will a state of emergency need to be declared for Trump to build the wall
2
When are the filing deadlines for the 2020 presidential primaries in each state?