I want to know the political reason why was it done so? Indians, especially the government in power, follow Hindu ideology. Why would a Muslim country do that?

Does it have anything to do with the Indian Prime Minister's charisma?

India and the UAE have close political and economic ties. According to this, wiki, the UAE was responsible for 11.5% of India's exports in 2015. Due to their close ties displays of friendship like this are common between them. For example, in an article detailing this event, it is also mentioned that

Crown Prince of Abu Dhabi Mohamed bin Zayed Al Nahyan will be the Chief Guest at the Republic Day parade on Thursday.

So their ties go back further than PM Modi, and this display was just part of a long running series of signals of friendship.

Also, as another question mentioned, India is constitutionally a secular state. It generally does not do politics based on religion. In fact pretty much all of India's major trading partners are not Hindu.

Because Pakistani Parliament overwhelmingly voted in refusal of Saudi request to join the Saudi-led Arab alliance fighting the Iranian backed rebels in Yemen. The Speech of Opposition leader, Aitzaz Ahsan from Pakistan People's Party on 5th day of the very heated debate on the matter can be watched here (In urdu language) in which he blasted the Government's ambigious stance and the proposal to send Armed forces to a war which Pakistani people did not feel was theirs. That speech turned the tide completely with the Parliament unanimously voting to decline Saudi request to send forces. To quote some points of his speech:

"Defense Minister says that Pakistan will issue a determinate response if territorial integrity of KSA is threatened. What exactly threatens that, please tell us that."
.
.
.
"Do we have a policy if Iran's territorial integrity is threatened? What about Egypt? Lebanon?"
.
.
.
"There's 2000 miles of desert between Yemen border and Saudia's big cities. How Yemen could possibly threaten Saudia?"
.
.
.
"I can comfortably say this is not a sectarian war. This is not Shia vs Sunni. This is a political conflict and a civil war."
.
.
.
"And who exactly are you going to defend? Saudi state? Saudi government? Holy cities of Islam? All three are different entities. You are not clear even about what exactly is your plan here but sure you will issue a determinate response, won't you?"
.
.
.
"There is a television advertisement going on nowadays. It's about a man named Bakhshu who always did what he could for others. But no one ever did anything for Bakhshu. Bakshu stands for everyone, no one stands for Bakhshu. Stop making Bakhshus out of us."

Even though, India has been the largest trading partner of UAE and 27.15% of UAE's immigrants are Indian, UAE had a strategic relationship with Pakistan in that they funded Pakistan's nuclear weapons program and helped Pakistan to smuggle various parts and accessories of Pakistan's nuclear industry. UAE's crown prince was the only foreign national who was allowed to visit Pakistan's nuclear facilities back in the 1980's. UAE funded lots of humanitarian projects in Pakistan including Hospitals, Schools, and so on.

UAE was one of the three countries who recognized Taliban government of Afghanistan, an artificial government created by Pakistan military back in the 1997's.

Everything suddenly started to change from April 2015 when Saudi Arabia formed a military alliance with eight Sunni majority countries to start a military operation against the Iran-backed Shia militants in Yemen. Saudi Arabia and UAE invited Pakistan to join their military alliance and to contribute to the war in Yemen. Pakistani parliament vetoed the proposal and decided to maintain neutrality apparently because of peaceful relationship with neighboring Shia Iran. Pakistan's PM and then Chief of Army Staff Rahil Sharif even tried to mediate between Saudi Arabia and Iran to de-escalate the situation.

This non-participation started a real spat between Pakistan and the UAE. UAE openly declared that "Pakistan would have to pay heavy price for their ambiguous stand". In the next few months, Narendra Modi grabbed this opportunity to widen the gap between the UAE and Pakistan and signed multi-billion dollars' of trade agreements and formed a deep strategic alliance with the UAE including defense agreements.

Since then, UAE is continuously making Pakistan jealous by showing off different feats including that tri-color.

Interestingly though, Pakistan never even sent any diplomatic mission to mend the relationship with the UAE.

Saudi Arabia's response to Pakistan's neutrality was quite different than that of the UAE. 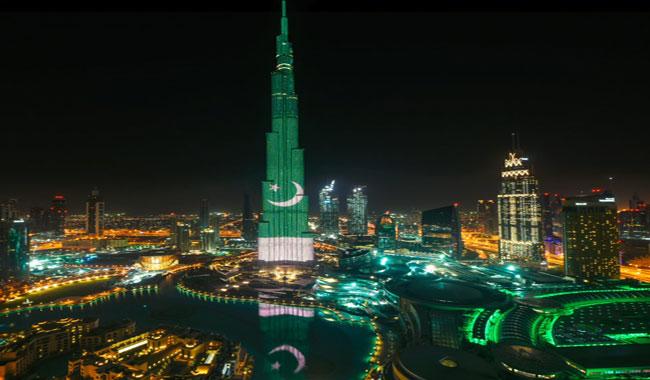 10
Why does India's Constitution say it's a “Sovereign Socialist Secular Democratic Republic”?

17
Why does India want Kashmir so much?
8
How does one official know that a foreign country representative is the proper person to discuss some matters?
8
How can Indian government afford highly unpopular decisions such as banknote demonetisation?
2
Regarding the status of dependent Indian migrants in the US
4
Pakistan Occupied Kashmir
6
What is the role of the Indian States in implementation of the Motor Vehicles Act, 2019?
0
Why do Pakistani and Bangladeshi Hindus frequently move across the borders but Indian Dalit Hindus don't?
7
Why is Hindu nationalism such a powerful political force in India?