What percentage of troops support President Trump according to latest polls?

A majority of America's military troops are backing Donald Trump – with career-minded forces favoring him by a 3-to-1 margin over Hillary Clinton, a Military.com poll shows.

The survey, released Wednesday, shows of more than 1,300 active-duty members of the National Guard or Reserve, 67 percent plan to vote for Trump compared with 21 percent who say they will vote for Clinton.

But, these numbers are disputed by many Twitter users: 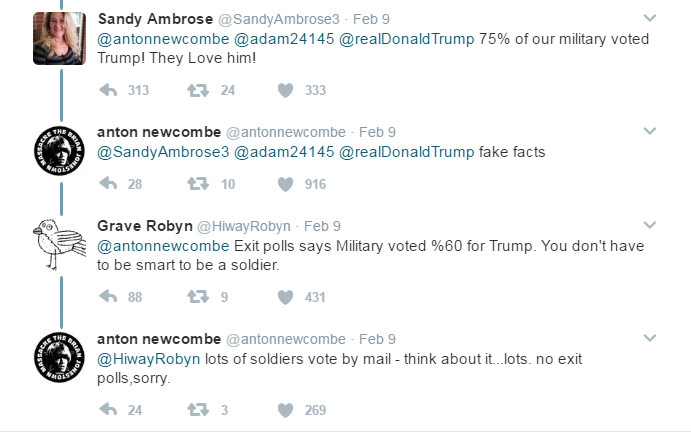 What percentage of troops support President Trump according to latest polls?

Career-oriented troops favor Republican presidential candidate Donald Trump over his Democratic opponent Hillary Clinton by a 3:1 margin, a new Military.com reader survey has found.
[...]
Trump's lead narrows when the results are filtered for the active component. For example, among only active-duty respondents, 63 percent said they plan to vote for him. [...]
Military.com conducted a voluntary online survey of readers [...] The sample is not a perfect representation of the military as a whole. It includes a higher percentage of airmen, soldiers, officers and noncommissioned officers, and a lower percentage of women, minorities and junior enlisted personnel than are in the force.

Donald Trump leads Hillary Clinton by 19 points — 55 percent to 36 percent — among voters who are currently serving or have previously served in the U.S.
[...]
A sizable number of military and veteran voters say they would not be confident in Clinton or Trump's ability to be an effective commander-in-chief of the nation's military — but a slight majority would be confident in Trump (53 percent).

Militarytimes.com also had a poll (also online, and also unscientific like the military.com poll). The poll is from Nov. 10 - 14 2016.

The poll surveyed 2,790 active-duty troops. Among those who voted, 51 percent said they supported Trump.

They also had a number of previous polls (eg here or here). qz.com notes that the high percentage for Trump is mainly due to the demographic markup of the military (more men than women).

Fox News also had a poll. It did not ask active military personell, but veterans. The result was 46% for Trump, 34% for Clinton.

The claim that exit polls show 60% for Trump is correct. Looking at the military.com poll, the fact that many voted by mail would likely reduce that percentage, not increase it, as those currently active are more likely to need to vote by mail, and according to that poll, they are less likely to vote for Trump.

There do not seem to be any polls that are more recent than these.

The Cooperative Congressional Election Study includes data which provides an insight into this. Looking at the most recent study available, 2018, we can split out respondents based on the following:

If we then look at how these respondents reported voting in the 2016 Presidential Election, we can produce the following:

We can also look at how these groups responded when asked whether they approve of how Donald Trump is doing his job, this also reveals some interesting data:

Not the answer you're looking for? Browse other questions tagged united-states donald-trump military public-opinion .

5
Who was polled in "The Latest Polls"?
2
What are US libertarians' views on abortion according to polls/surveys?
9
Do any Republicans support the impeachment of President Trump, or have they said what it would take for them to support it?
2
What percentage approval rating does Trump have among self-described liberals?
58
Are there polls why Germans dislike Trump so much and consider him so dangerous?
4
Have any polls been conducted measuring support for the WHO?
2
Was Trump such an underdog 4 years ago according to polls?