What caused the SPD to gain in opinion polls in early 2017?

From Opinion polling for the German federal election, 2017, poll were quite stable between 2014 and 2017, only with a gradual decline of CDU/CSU with a moderate rise by AfD since late 2015¹: 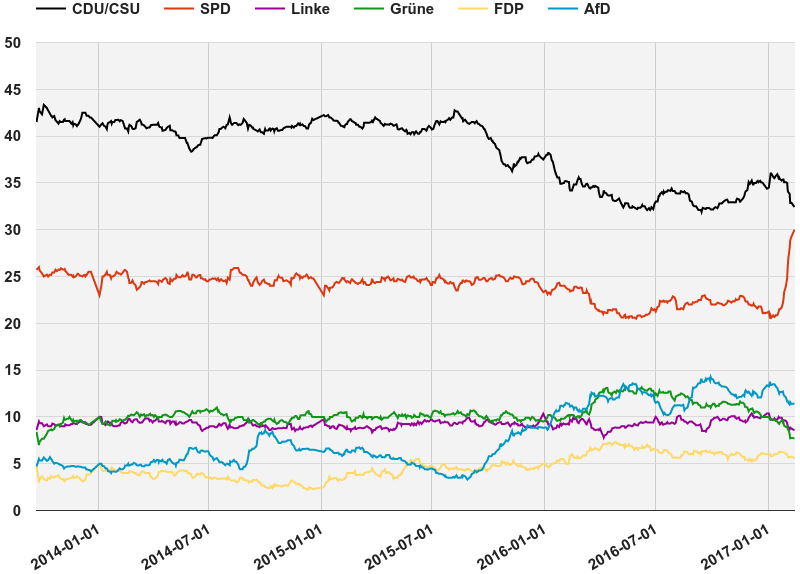 However, since the beginning of 2017, the SPD has risen dramatically, seemingly at the expense of all other parties except FDP. CDU/CSU had a virtual 15-percentagepoint lead that has essentially vanished. The SPD situation is in contrast with the situation of social-democratic parties in other northern/western European countries such as France, UK, or The Netherlands, where social-democratic parties are doing poorly in polls or in reality. In neighbouring The Netherlands, where social-democrats are the junior party in a grand coalition similar to the one in Germany, social-democrats have consistently polled below 15% since 2013 and below 10% since 2015 and are now the 7th party, polling at 7.4–8.5%.

What are the causes of the sudden recent increase in the opinion polls for the SPD?

¹Around ⅛-⅐ of CDU/CSU-voters apparently moved to AfD, this is often attributed to dissatisfaction over the refugee policy, EU, and Euro.

The recent raise in SPD poll results correlates very obviously with their nomination of Martin Schulz as their chancellor candidate for the election this summer. I am not implying that correlation generally implies causation, but in this case it is extremely obvious.

Before that nomination, the general assumption was that party leader Sigmar Gabriel would be nominated. Gabriel is not particularly popular among followers of the SPD. The SPD held a vote of confidence regarding Gabriel's leadership in December 2015 and only 74 percent of the party delegates voted for him, which is the lowest for an SPD leader in 20 years.

A big advantage of Martin Schulz is that he spent the past two decades doing politics in the European parliament, so he is able to criticize the politics made by the current large coalition between CDU and SPD. Gabriel would be in a quite weak position to attack the policies of the CDU in general and Merkel in particular, because as vice chancellor he is partially responsible for them. Schulz, on the other hand, can (and does, sorry, could only find a German source) even criticize unpopular decisions by his own party, like the Agenda 2010, the welfare reform under Gerhard Schröder which was very unpopular with the German left.

Not the answer you're looking for? Browse other questions tagged public-opinion germany .

4
CDU delegates will vote on German coalition proposal; SPD members have started voting; will there be a vote in the CSU too?
2
In 2013 did an SPD delegate conference vote on a proposed "grand coalition" in Germany, and if so what proportions of delegates voted for and against?
82
Why do UK politicians seemingly ignore opinion polls on Brexit?
6
Are there any public opinion polls in the US on them starting military action against Iran?
20
Have any polls surveyed the opinion of Brexit supporters on the recent decision on Hong Kong BN(O) passport holders?
10
What is the opinion of Israeli Arabs on the Palestinian question?
6
What are some of the biggest differences between Germany's SPD and The Greens?
25
Why isn't the CDU / FDP / AFD a viable coalition government in Germany (2021)?