A common criticism against the agricultural subsidies (mainly against export subsidies) of the European Union is that it leads to dumping in developing nations (say, for example, Ghana) and destroys their traditional industries. Developing countries, whose economies are primarily agricultural, are affected largely by this dumping, since the cost of imported food products are cheaper than locally produced ones.

However, wouldn't it be fairly easy for these countries to simply impose an import tariff on food products to protect their industries? Why go through vain rounds of negotiations with the EU or the USA? (The Doha rounds, for instance)

One point is that not having an import tax on EU agriculture products is often part of trade agreements with these countries. By this agreements, they can export products to the EU without tax restrictions. This still might be a bad deal for the local population in general, but the local political elite does often benefit from such deals (because they own the mean of production of the products exported).

Another point is that, if the country has a lot of debt or does rely heavily on foreign aid then some external players (the IMF, for example) might force you to keep the trade liberalization in place. Note that these external economic measures are mostly not a conspiracy against these countries but driven by an ideological commitment to free markets. Josef Stiglitz's book "Globalization and Its Discontents" discusses this issue in detail.

The situation is complicated depending on whether such a country is a net food importer or not. If it is, then slapping import tariffs on food is generally not a good idea, at least in the short run. In fact such countries worry that a reduction in EU subsidies will increase food prices for them; from the (failed) Doha-round talks:

A number of developing countries that depend on imports for their food supply are also concerned about possible rises in world food prices as a result of reductions in richer countries’ subsidies. Although they accepted that higher prices can benefit farmers and increase domestic production, they feel that their concerns about food imports need to be addressed more effectively.

The standing Uruguay agreement has a Decision on Measures Concerning the Possible Negative Effects of the Reform Programme on Least-Developed and Net Food-Importing Developing Countries along the same lines.

During the 2007-2008 food price increases a number of countries have lowered their import tariffs and/or increased their export tariffs (as to keep more food at home):

(There's a breakdown by country in the paper too, it's bit long to include here.) Just the fact that a lot of African countries lowered their food tariffs in this period should be a good indicator. Asian countries reacted more with export tariffs or outright export bans.

Slightly older data on their food balance easily explains why had to do this:

While low-income countries (excluding the oil exporters and conflict countries) as a group have a positive food trade balance, this is mostly due to a few large countries having food trade surpluses. The unweighted net food imports for the 40 low-income countries that were neither oil exporters or in conflict were about -1% to total imports in 2000/2001. This food trade deficit increased to over -2% of their imports by 2004/2005. During the same period, their unweighted food trade deficit increased from -0.5% of their GDPs to -1.0%. 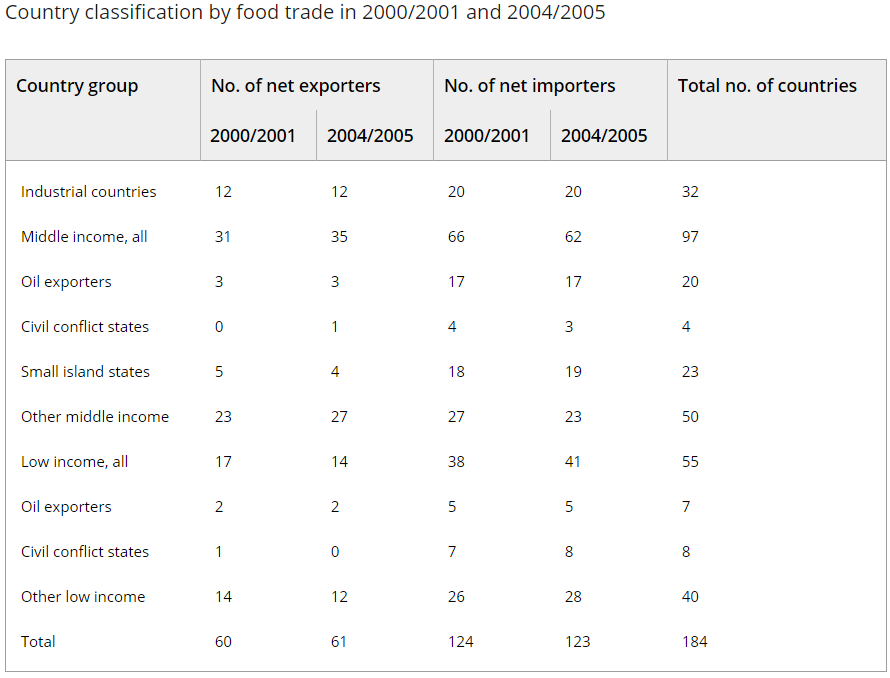 And if you consider a developing country with positive food-trade balance with the EU, e.g. Brazil, their concern is actually the import tariffs of the EU as well the EU subsidies:

In 2015, Brazil’s agri-food exports to the EU were valued at €13 billion and those from the EU to Brazil at €1.6 billion. [...] The main exports from Brazil are animal feed preparations, coffee, soya beans, orange juice and various meats (in particular beef and poultry). The importance of these products in the composition of Brazilian exports to the EU has remained fairly constant over the last 16 years. As for EU exports to Brazil, the most important products in 2015 were whisky, olive oil, potato and other food preparations, and fresh fruit. (Ninety-nine per cent of EU whisky exports were from the United Kingdom. Clearly, Brexit is likely to have an impact on this and other bilateral trade flows between Brazil and the EU). [...]

The Brazilian economy overall is subject to relatively high protection, with an average applied tariff of 13.5 per cent (European Commission, 2016). However, support for the agricultural sector is considerably lower, and below that applied by the EU. As measured by the Nominal Protection Coefficient (NPC), prices received by Brazilian farmers are close to border or world prices (NPC=1.00), whereas those received by their counterparts in the EU are, on average, 6 per cent higher (NPC = 1.06) (OECD, 2016). Brazil has long been critical of the Common Agricultural Policy and has sought (along with others) in the international arena to have the level of protection afforded to EU farmers reduced.

A case in point is soya beans, a major export from Brazil to the EU. Soya beans enter the EU tariff-free, but a tariff on processed soya oil affords protection to EU crushers and refiners (Nassar et al., 2007). A similar story applies to coffee, where the raw product enters the EU tariff-free, but roasted coffee is subject to a 7.5 per cent tariff. In short, low value-added agricultural commodities exported from Brazil to the EU face much lower tariffs than those that apply to the processed derivatives. This encourages the exporting of agricultural commodities, but makes it more difficult for Brazil to compete in the EU markets for higher value-added products.

So basically, you have this backwards, it's the [developing] countries which export food to the EU who would like to see the EU subsidies scrapped.

Of course, saying what the net food importers did is much easier than what they should do in response to price increases (or somewhat equivalently, whether they should increase tariffs). I think the academic debate in this area is still being hotly contested. E.g.

Five-person household living in Bangladesh on one-dollar-a-day per person spends its $5
– $3 on food
– $0.50 on household energy
– $1.50 on non-foods
• A 50% increase in food and energy prices cuts $1.75 from their expenditures
• Food expenditures will be cut most, and will be accompanied by:
– Reduced diet quality
– Increased micronutrient malnutrition, increasing probability of developmental damage
Source: Based on von Braun (2008)

Aksoy and Isik-Dikmelik (2008)
– Based on household surveys for nine countries, agrees there are more poor net food buyers than sellers
– But suggests that half these households are marginal net food sellers, thus price increases will have small impacts on their welfare
– Notes that the average incomes are net food buyers are higher than the average incomes of net food sellers, so higher food prices transfer income from rich buyers to poorer sellers and thus are ‘pro-poor’.
– Note that policies of low food prices in developing countries (e.g. through rural taxation) penalised agriculture to the detriment of overall economic growth

And considering such effects on a group of countries, still leaves the issue that there may be substantial heterogeneity between such countries in the distribution of net buyers and sellers foods: 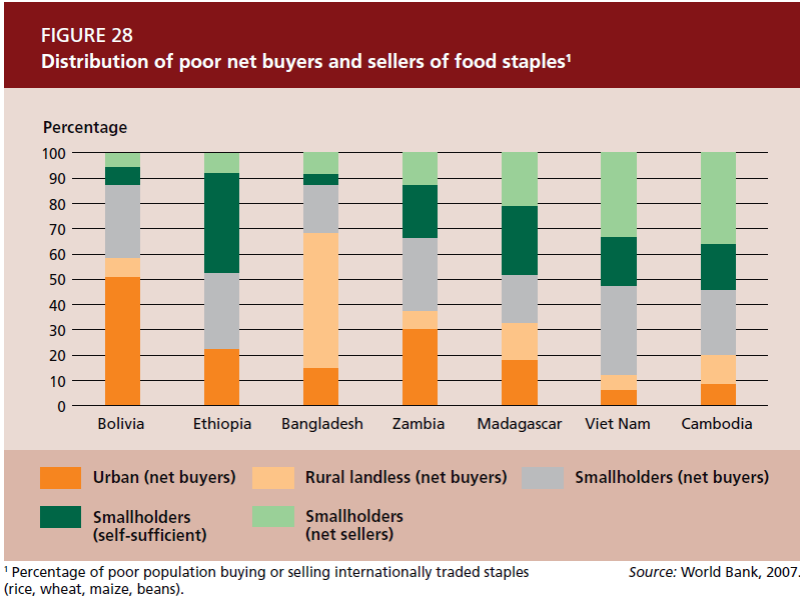 Taking the Doha Development Rounds as an example here, the WTO focuses on "substantial improvements in market access; reductions of, with a view to phasing out, all forms of export subsidies; and substantial reductions in trade-distorting domestic support" - 1.

So, basically it is trying to expand the market base of all its member economies. While the developed economies are asked to reduce their agriculture subsidies, the developing countries have

"to make more substantial reductions in (import) tariffs and to limit the number of import-sensitive and special products that would be exempt from cuts" - so that free trade is possible among the countries.

There is a slight bias towards the developing countries, but that is due to their immense dependence upon agricultural production and high hunger indices.

A better example should be Israel, with self-sustainable agriculture in the desert. The water conservation and various technology allow them to increase yield that even surpass the vast Africa land.

Increase tariff will NOT help corruption rampant country agriculture, the root cause of Africa low agriculture yields mostly due to poor technique and poor agriculture management policy. Ironically, the situation worsens by foreign aids provide to Africa population, somewhat similar to the resource curses. I.e. those regimes continue to be mismanaged due to free foreign aids, and ever increase populations growth continue to destroy the scarce forest for food crop and worst, massive land clear for price crops. There is little that body like United Nation can help, as the P5 has their own agenda.

In addition, increase tariff in corruption rampant company only create opportunities to oligarchy to reap profits, corrupted government and its oligarchy can simply buy cheap foreign cheap food and resell to the people with the hiked price.

The is no practical policies fix for such issues.

That is not the problem. Tariffs on European food won't change anything. The French and German lead EU is too selfish to help developing nations. Poor countries should start exporting something on the international market. Of course you are right, food export should be the main product to offer. There are few countries that are importing food, but with subsidies, regulations and trade deals the food from developing countries is loosing against the food from EU.

EU should help Africa in the same way USA was helping Japan , Taiwan or South Korea. Allow poor countries to have tariffs and open the market for them without restrictions. Instead western Europeans buy out competitors to close them and take over the market.

One example of such practice was German take over of sugar production in Poland. Until 2001 in Poland there was 71 sugar refineries. In 2006 corrupted government sold 46 to mostly German competitors. In the same year EU decided to scale down the sugar production paying 730 EUR/ton of reduced production power. German were paid by EU to close the refineries in Poland. The machinery went to Germany, leaving Poland with 18 out of 76 working refineries in 2016. Of course the production in Poland was cheaper than in Germany, so why capitalists decided to leave more costly German refineries working? Because it's German capitalism, one could only wish Poland had stronger economic ties with USA than with Germany.

Not the answer you're looking for? Browse other questions tagged international-relations economy .

6
What is the difference between developed countries and developing countries?
2
Why does the EU choose to label products from the "occupied Territories" in Israel?
12
If medication prices in the US are higher than in other countries, why not import from there?
8
When and how were the current US and EU tariffs on cars decided?
0
Why don't neutral countries like New Zealand purchase any strategic equipment from Russia?
2
What provisions does JCPOA contain for medical isotopes or their (special) precursors?
45
Why don't countries like Japan just print more money?
3
Is the U.S. openly pursuing the agenda of containing the economic development of developing countries?
22
How is it possible to travel to countries that don't recognize the issuing country of one's passport?