What is the opinion of people of Japan about Article (9)?

Under Article 9 of Constitution of Japan, Renunciation of war :

The "Japanese people forever renounce war as a sovereign right of the nation and the threat or use of force as means of settling international disputes". To this end the article provides that "land, sea, and air forces, as well as other war potential, will never be maintained".

What is the opinion of people of Japan about Article (9)? Is there a poll?

If there are several polls during , I would like to know how opinions are changing over time.

Unfortunately few places are as heavily polled as the US, so I've not been able to find a lot of data for Japanese opinion of article 9, but I have found a few. The results I have found appear to be mixed.

This policy is not intended to do away with postwar Japanese pacifism. The word “pacifism” is not included in the English expression “policy of Proactive Contribution to Peace,” but Abe’s expression sekkyoku-tekiheiwa-shugi in Japanese implies positive pacifism. Sekkyoku-teki literally translated means “proactive” and heiwa-sugi literally translated means “pacifism.”

Japanese public opinion has, however, not been very supportive of the decision. An urgent opinion poll conducted on July 2 and 3 by the Yomiuri shimbun, a national daily newspaper with Japan’s largest circulation (9.25 million in July 2014), said that the approval rating for the Abe administration was 48%, down 9 percentage points from 57% in the previous opinion poll in May. The disapproval rating was 40% (31% in May’s survey). In the Yomiuri shimbun’s opinion poll, the Abe administration’s approval rating fell below 50% for the first time since the administration took office in December 2012. In the poll, 51% did not support Japan’s limited exercise of its right of collective self-defense, against only 36% who did support it. Opinion polls in other media outlets showed similar results. A poll conducted on July 11 to 13 by NHK (Nippon Hoso Kyokai [Japan Broadcasting Corporation]), Japan’s semi-national public broadcasting organization, said that 38% supported the cabinet decision to approve the exercise of the right of collective self-defense, while 56% did not. The Abe cabinet was supported by 47% of respondents, down 5 percentage points from a poll in June. For NHK polls as well, this was the first time the approval rating for the Abe administration had fallen below 50%. (In the poll, 38% of respondents did not support the administration, up 6 percentage points from the previous month.)

Note that this article goes into some explanation as to why the results seem to vary so much; I recommend reading the full article.

This article also has some useful graphs of opinion polls over time given by the major newspapers: 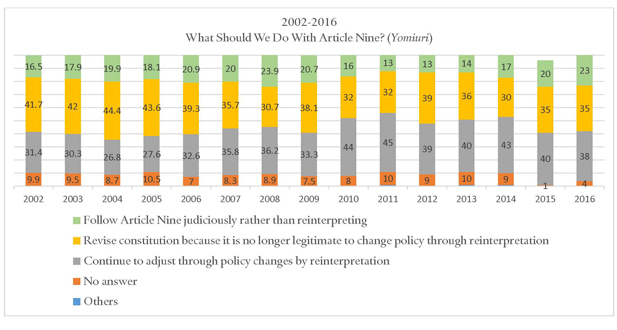 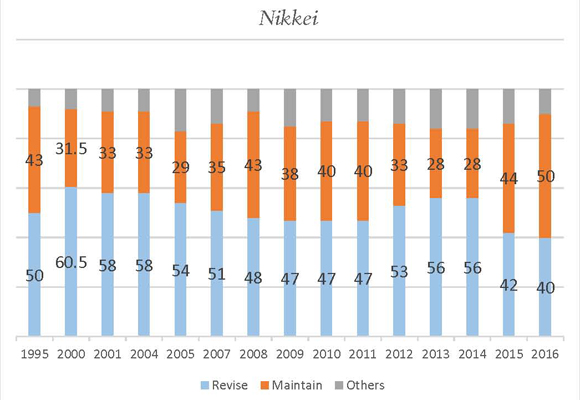 Not the answer you're looking for? Browse other questions tagged constitution polling japan .

32
Why is Japan more revisionist about its World War II era actions than Germany?
7
How was Japan's involvement in the Korean war reconciled with Article 9 of the constitution?
13
What do Americans nowadays think about WWII internment?
8
What caused the SPD to gain in opinion polls in early 2017?
64
Is Japan still bound by the terms of its surrender in WWII?
10
What has North Korea achieved, by firing a missile over Japan?
30
Are opinion polls always representative of the extreme opinions?
10
In American politics is the “free ride” problem (Japanese defence spending) acknowledged as a direct consequence of American strategy?
12
What is the public opinion in Hong Kong about the protests? How many of them support it?
2
What happens to the emperor's birthday public holiday in Japan if the emperor dies?