Why is Palestine not a state yet? [closed]

Because Israel (backed by the United States) is against it. Almost every other country is ready to recognize Palestine. However, a UN veto by one of the Security Council's five permanent members, which includes the United States, is sufficient to block UN membership.

Israel is against it because recognition of Palestine would require fixing some borders. Right now the borders are disputed, which means that in practice the militarily stronger side makes the rules, which is Israel. Also, according to the most plans for establishing Palestinian borders, Israel would lose access to some sources of fresh water (which in that region is an extremely important resource since it's so dry).

Of note, while Israel has at times offered peace and recognition of Palestine, the draft agreements always specified a continued armed Israeli presence in Palestine so that Israeli forces could continue to conduct raids, etc, on the Palestinian side of the "border".

The United States has historically backed Israel in order to maintain some control over the region; virtually everything else in the area is anti-U.S. So Israel was convenient as a kind of base for the U.S. - it could send fighter planes to Israel instead of having them fly from inefficiently far away; and plus, if things got really hairy in the middle east, Israel could do some of the actual fighting too.

Nowadays with the development of drones, etc, it is less important to have a ground presence in the area. Also, the U.S. dependence on foreign oil is has been eased thanks to shale oil:

The fraction of crude oil consumed in the U.S. that was imported went from 35% immediately before the 1973 oil crisis, peaked at 60% in 2005, and then returned to 35% by 2013[7] thanks to increased domestic production[8] from the shale oil boom.[9] https://en.wikipedia.org/wiki/United_States_energy_independence

Therefore, maintaining control over the middle east is not such a big priority anymore. Ultimately, U.S. support for Israel is on the decline, though certainly the U.S. is still a lot more supportive of Israel than of Palestinians.

Well, the Palestinians were there first, and they were kicked out and marginalized by Israel so they hate that and fought back. Israel's point of view was that Israel is the only country in the world for Jews while the Palestinians, who are Arabs, have plenty of Arab countries to go to. So Israel fought back also. And of course the fighting results in deaths which have to be avenged, etc, so both sides are basically caught in a giant hate machine.

As you alluded to in your summary, the nation of Israel was formed during WWII and it included land claimed by the Palestinians. Israel became recognized by the global community, where as Palestine did not. Since then Palestinians have been trying through various means to create a nation. This has of course been a contentious process. The latest and most critical legal proceedings regarding the Israel-Palestine relationship is the Oslo Accords. In short the Oslo Accords explicitly stated 3 things:

Since the Oslo Accords are the last internationally accepted official guiding documents of the land, this is why there is currently no Palestinian state.

There are of course many other contributing factors. The most crucial one is that Israel, being the official custodian of the claimed Palestinian land, will need to sign off for a Palestinian state to truly exist. The current Israeli PM, Benjamin Netanyahu, has stated that as things currently stand, the two-state solution can not be achieved, so at the moment Israel would not give any sign-off.

Why does Israel from time to time build and destroy settlements in those areas?

There is actually a great answer that already covers why Israel builds settlements here.

As for why they destroy settlements, that is actually pretty rare. It happened once recently because the Israeli Supreme Court ruled that the land was illegally used and therefore should not have been settled.

Why does Israel and Palestinians attack and kill each other time to time?

I think that this question is really too broad and opinion based to effectively answer on Stack Exchange (see my comment), so I will just say in passing that there are deep cultural, ideological, religious and political differences between the two that lead to these extreme actions

Let's begin by repeating the definitions of de facto and de jure:

De jure the state of Palestine exist. It has a government (two actually, when counting Hamas) the Palestinian Authority, diplomatic relations with other states and is recognized by a majority of the world's sovereign states:

De facto it does not exist since it doesn't exercise control of its own territory. In fact, what the state's territory is, is undefined. Often, it's borders are drawn like this: 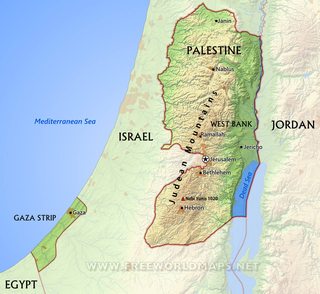 But that map doesn't map (de facto) to reality, due to the settlements and Israel's occupation of the West Bank. 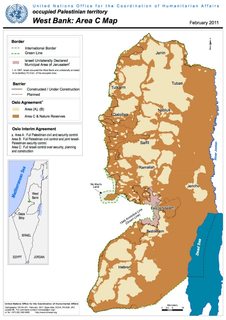 The light brown areas is that the Palestinian Authority currently controls, and the rest is what Israel controls. As can be seen from the map, the "islands" the Palestinians control are too fragmented to form a sovereign state and Israel therefore must relinquish control of territory it controls to allow a Palestinian state to exist.

This answers your question. Palestine is not a de facto state because Israel does not want it to be a de facto state. Palestine can not force itself to come into existence (like Israel did in 1948) because it has no military and would lose badly in any violent conflict with Israel.

Perhaps your follow up question is "Why does Israel not want Palestine to exist?" which is harder to answer. A multitude of reasons can be given, such as:

Of these three reasons, I believe the first one is the most important. The goal of the group which created Israel, was to create it on the same territory that the Israelite tribes lived in. That way, the state would have a natural historical connection to the land it controls. 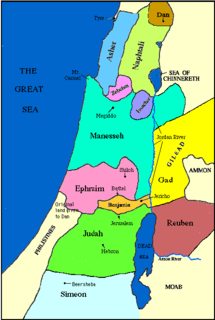 If you draw the outline of the West Bank on the above map it would cover most of the territory of Manesseh, Ephraim, Benjamin and Judah. Giving these areas to the Palestinians is currently not possible because many Israeli Jews feel that they are part of their historical homeland. For them, it would be no different than asking Greece to give up Crete.

I should clarify that this is my belief of why Israel doesn't want a Palestinian state on the West Bank. Therefore I don't feel the need to link to sources and this part of my answer only scratches the surface anyway. If the op is interested, then he or she should ask a question specifically about that topic.

So, in any way, it's hard to say that Palestine is not a state yet. It is just that it had not been recognized by the US and some other states.

I am going to try hard to be objective here.

To be honest, there is little evidence that Palestinians want a State which will co-exist with Israel(Oh, and let's be honest, the Jews aren't going anywhere from Israel. The only solution which will promise some peace is a two-state solution). There have been so many offers for peace and each time it only leads to further bloodshed.

In 1947, the UN declared a Palestinian state but it was turned down as the inhabitants preferred to wait till the Arab nations destroyed Israel(which didn't happen).

Jordan is more than 70% Palestinian, yet there is no Palestinian nationalism in Jordan. They could have declared a state when Ehud Barak acceded to all of Arafat’s demands at Camp David in 2000. It's almost like Israel is just giving peace offers which are simply rejected by Palestine who probably aren't ready to declare their state yet for some reason.

The fundamental problem is just that the land is disputed and both sides claim it. And there has been a lot of bloodshed over it. Basically the story of every conflict.

In addition to the above answers, there is the question of Jerusalem: both Israelis and Palestinians claim Jerusalem as their capitol, and both sides adamantly oppose the political division of the city, creating an impasse in any declaration of Palestinian independence.

To put it simply - Palestine and Israel are the same place - a piece of land between the Mediterranean sea and the Jorden river. The Jews want it, the Palestinians want it, and the Jews are stronger.

Both sides see the land as rightfully theirs. As long as both sides insist of having what they see as theirs, then either Israel or Palestine can exist as an independent country, but not both. The Jews are stronger, so Israel is an independent state and Palestine isn't.

In both sides there are those who are willing to compromise - give the other side a part of "their" land. Such a compromise would lead to a two state solution, where both Israel and Palestine would coexist, a solution most of the world would like to see.

However, actually reaching such a compromise is very hard, for two main reasons:

Israel was the historical land of inhabitance of Jews from where they were evicted because of various reasons including Muslim conquest.

That depends on how far back in history you wish to go and how you want to define "country".

With that said, a country called Palestine Existed and continue to exist today.

60
Why does Israel build settlements in Palestine?

60
Why does Israel build settlements in Palestine?
21
What is the current meaning of “Palestine”?
18
Why won't Israel just capture Palestine?
23
What is the historical basis of Israeli and Palestinian claims to the land that is now under Israeli control?
20
What alternatives to a two-state solution have members of the Israeli Right proposed?
0
Why haven't the property of present-absentees not been returned?